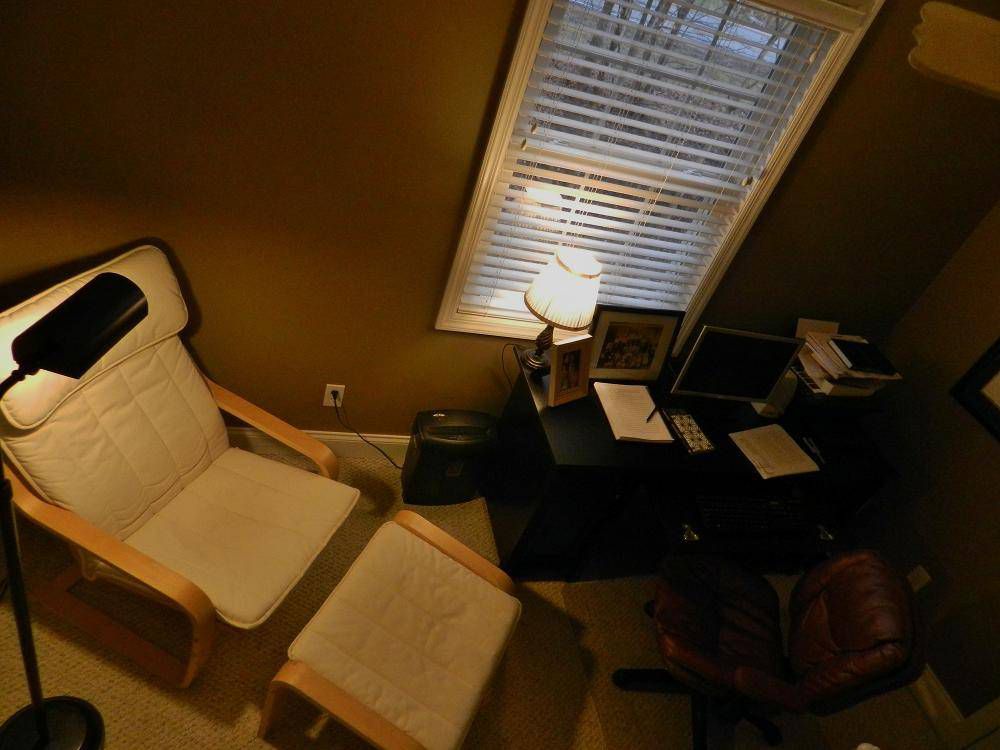 This is my office in our home in Morgantown, West Virginia, and this is the desk and chair I’m using to write my second novel, which is scheduled to be released in November 2013. I write on a desktop computer without internet access because, like a lot of writers I know, I look for any reason I can find to distract myself. My first novel, A Land More Kind Than Home, out in paperback from William Morrow/HarperCollins on January 22, 2013, was written on this same computer when I lived in Lafayette, Louisiana, from 2003-2008. The novel was revised from 2008-2010 while I was living in Bethany, West Virginia, and teaching at Bethany College.

There’s nothing very special about my office. I try to keep it clean and uncluttered, but I’ll admit that I spent a few minutes putting things away before this photo was snapped. The white chair and ottoman in the left side of the frame is from Ikea in Pittsburgh, Pennsylvania; I bought them with the first paycheck I received from Bethany College. I’d always wanted a comfortable reading chair, and I was excited the entire hour and a half drive to Ikea, but I’ll confess to being a little overwhelmed when I arrived. It was late in the evening – near closing time – and it seemed like I was the only person in the whole store. It took me forever to find all the different parts to the chair and ottoman, and I remember being surprised when I realized I’d have to put them together when I got home. They stayed in their boxes for a couple days, and now I rarely sit in it. Anyone want to buy an Ikea chair and ottoman? They’re already put together. 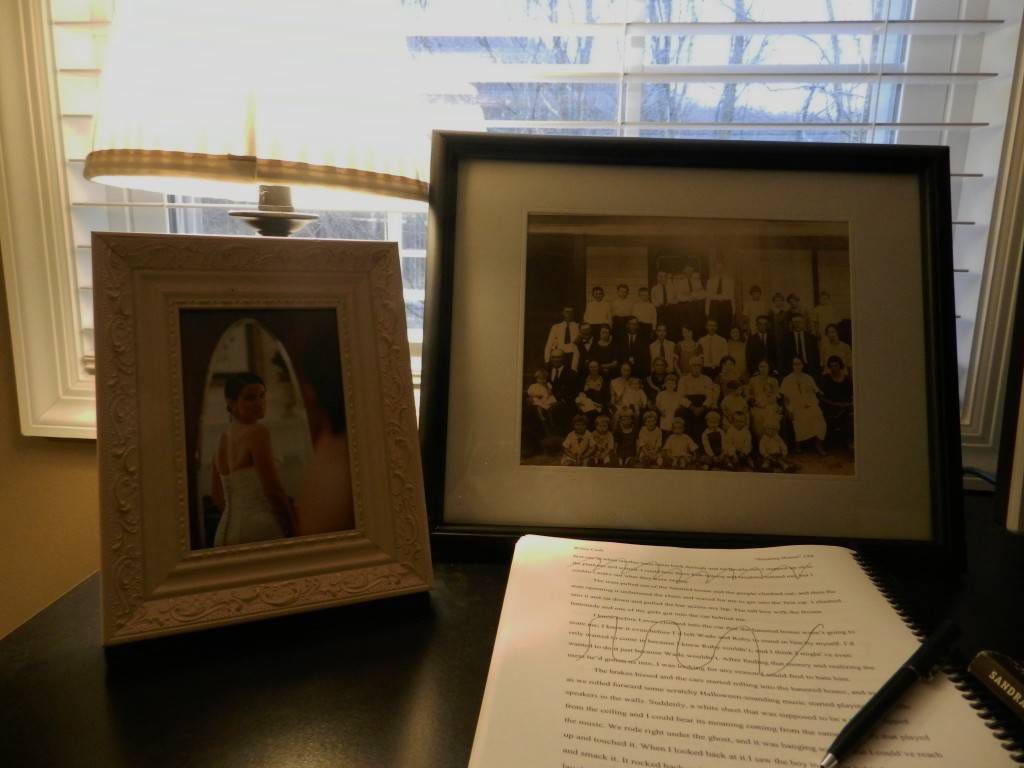 These pictures are always on my desk. The one on my left is of my wife on our wedding day in Wilmington, North Carolina, in February 2010. Earlier in the week, we’d left West Virginia in over two feet of snow and headed south to the North Carolina coast. It was about sixty degrees two days before our wedding, but it started snowing on Friday night during our rehearsal dinner, and the next morning there was still a good bit of snow on the ground. I love this picture, which was taken at an old inn near the Cape Fear River just before she and her father walked down to the church for the ceremony.

The picture on the right is of my father’s family on the steps of their old farmhouse. It was taken somewhere in Cleveland County, North Carolina, which is about an hour east of Asheville in the foothills of the Appalachian Mountains. My grandmother is the tiny baby dressed in white in the arms of the woman in the black dress who is seated on the front row, second from the left. This is my grandmother’s family on the farm where she spent a lot of her childhood. She was born in April of 1923, so I figure this photo must’ve been taken that spring, maybe on a Sunday after church based on the way everyone’s dressed.

In front of the pictures is a bound copy of my second novel. To quote Forrest Gump, “That’s all I have to say about that.”

This 1’ x 4’ collage, done by our good friend Kimberly Jo Lawless in Bethany, West Virginia, hangs on the wall just outside the office, and I look at it every time I go in. It tells the story of my wife’s and my relationship, and I commissioned it for her birthday right after we got engaged. The seagulls in the middle of the frame are flying from the ocean to the mountains, symbolizing the move my wife made after we met at the beach in North Carolina in the summer of 2005 and she joined me in the mountains of West Virginia four years later. One the seagulls has a gardenia in its mouth, which is the flower I gave her on our second date. You can’t see them in this photo, but the line to one of my favorite songs is split on the left and right sides of the collage. The song is “Off to the Sea” by the Biscuit Burners and sung by Shannon Whitworth, and it’s about a man from the mountains and a woman from the ocean who are in love and torn between the two places. The line from the song that’s in the collage is “the same road that takes you far away will bring you back to me.” My wife had the line split in half and engraved on the champagne flutes we toasted with at our wedding. 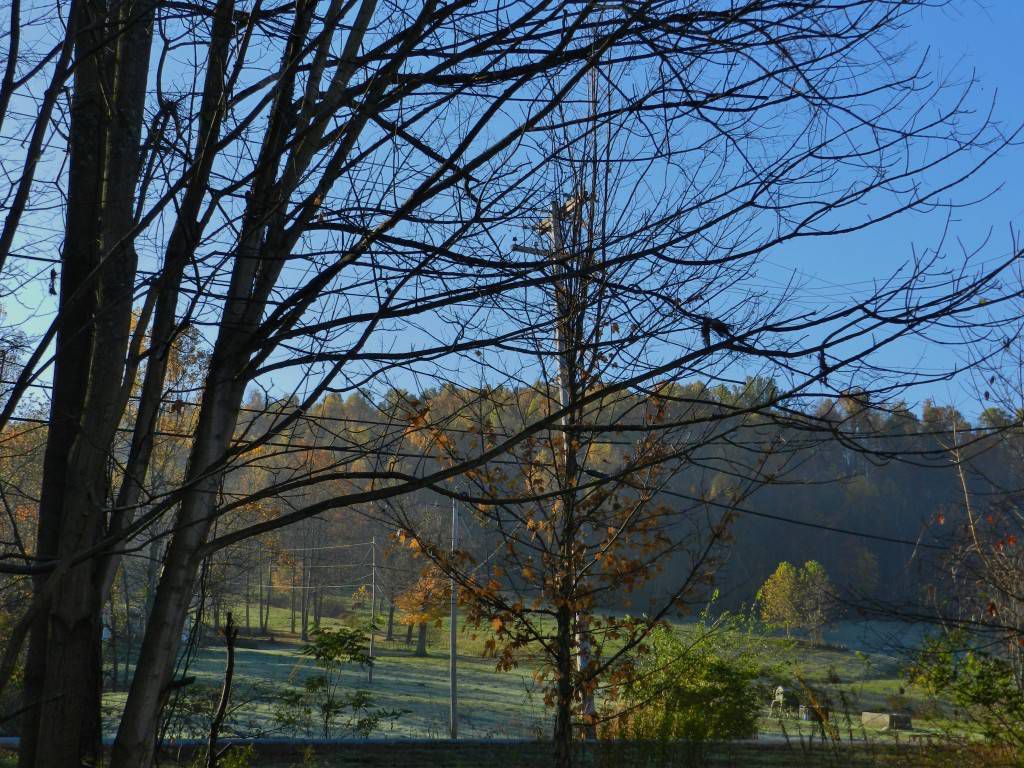 This is what I see when I look out the office window, and it’s a pretty incredible view regardless of the season. You can’t see them in this photo, but the ridge is usually dotted with cows, and when I open the window I can hear them baying from up the hill across the street. In the late afternoon – when it’s time for them to feed – I like to sit and watch them run down the hill to the front gate where the hay is dropped into bins. You’d be shocked at how fast a cow can run when it’s time to eat.

Surprisingly, the best thing about the farm is the way it smells, especially at sundown. The soft scents of hay, grass, and mud float down the hill toward our house. Across the street from us is a little creek that you can hear running when the windows are open. In the summertime, at dusk, when you can hear the cows lowing, smell the farm, and listen to the creek, this is just about the most beautiful place in the world.

Wiley Cash is from western North Carolina, a region that figures prominently in his fiction. His first novel, A LAND MORE KIND THAN HOME (William Morrow/HarperCollins) debuted on the New York Times bestsellers list in May 2012. It is now available in paperback. Wiley teaches in the Low-Residency MFA Program in Fiction and Nonfiction at Southern New Hampshire University. He and his wife currently live in West Virginia.