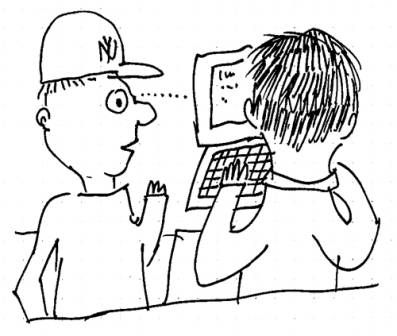 I officially started writing my novel (The Festival of Earthly Delights) in April of 2005, although its true origins can be traced back to 1997, when I was living in Khon Kaen, Thailand. In lieu of any other entertainment, I spent almost every evening sitting on an overturned trashcan outside my apartment, drinking lao-Lao and writing epically overlong letters that, years later, I’d use as the raw materials for my book. Below is an illustration that I included in one of those letters, depicting my set-up. (Not sure why I don’t have any pupils/irises in my eyeballs. Creepy.) 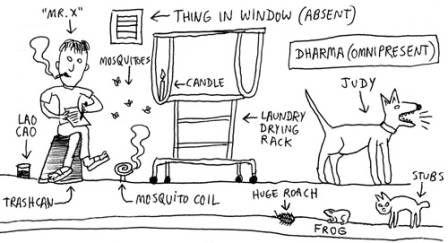 At the time when I began writing my book in earnest, I’d just started a new freelance gig at a major corporation. The job was so complicated and boring that I won’t bother attempting to describe it here, though I will say that it involved creating presets for exporting PDFs. (Need I say more?) After working there for a month, there was a mysterious lull in the project, and I suddenly had nothing to do. My manager insisted that I come to work anyways—I suppose in the off chance that some PDF-export-preset-related emergency arose. After a few days of sitting there surfing the web, I decided that I might as well get some writing done. Rather than brazenly working in Microsoft Word, I instead typed the first 50 pages of my novel in a series of emails sent to myself. Getting paid an hourly wage to sit and write a novel is a beautiful thing. Thank you, [Unnamed Major Corporation]. (To my current employers: please note that I no longer write in the office. The photograph below is merely a simulation.) 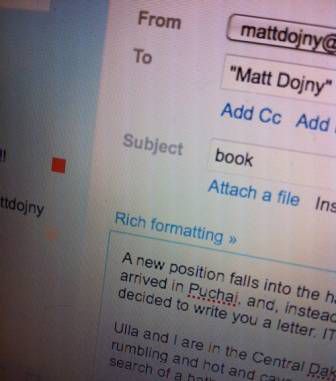 Once my PDF-export-preset project started up again, my writing-in-the-office phase ended, and I had to invent new novel-writing strategies. I tried working in the evenings, but found it difficult to write after having already spent the day staring at a computer screen. And then I had a brainstorm: I’d go analog, and work on a typewriter at night! This phase was fairly short-lived, due to the hassle of re-typing everything back into the computer, and I soon reverted to my 21st century ways; but I still have fond memories of sitting at the kitchen table, pecking away on my electric typewriter. 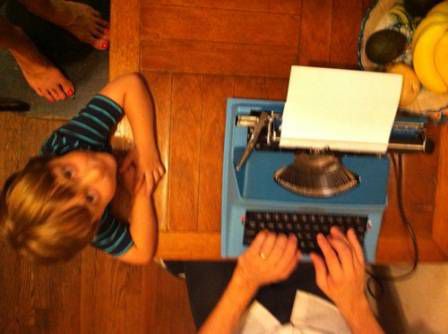 I eventually abandoned night-writing and took a shot at morning-writing. I’d wake up at 5 am (which, in retrospect, I think is seriously impressive; right?) and sit in the semi-darkness at my kitchen table, drinking green tea and easing into consciousness. It wasn’t the most productive I’ve ever been, but, some of the most enjoyably weird aspects of my novel were generated during these twilit hours. However, the sleep deprivation started having a cumulative effect on me, making me increasingly loopy during the workday, and so I tapered off after a while and resumed a more civilized sleep schedule. (I’m not sure why I look like the human embodiment of evil in this photograph; once again, I have those empty, staring eyeballs. I’m going to go look at myself in the mirror.) 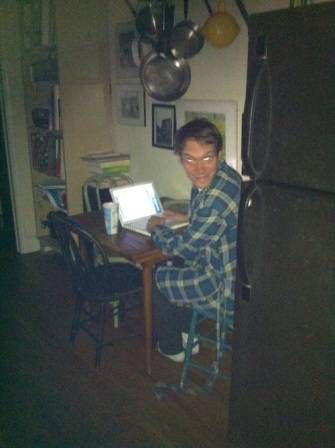 My in-laws own a tiny house situated in a small island community located on the Long Island Sound in South Norwalk, Connecticut; and, mid-way through my novel-writing process, I decamped there and spent a solitary week working on the book. It was in the middle of winter, and my only companion during that time was my dog, Lizzy. Twice a day, Lizzy and I would take a walk around the quiet, empty-seeming island, and I can’t recall ever running into another human being during our strolls. The whole scenario had a cozy post-apocalyptic vibe, and it was perhaps the most productive week of my entire life: I’d write for twelve hours straight every day, pausing only to raid the freezer for sustenance. (A standard dinner would consist of a mélange of Trader Joe’s appetizers.) When my wife finally came to retrieve me, I’d written 100 new pages and had grown a pathetically patchy beard. 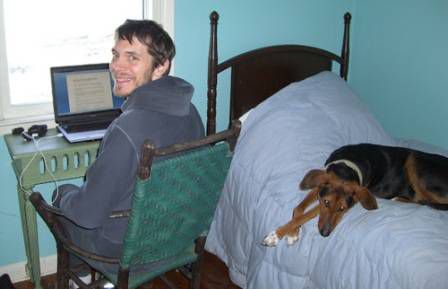 I was constantly trying to come up with innovative new ways of utilizing scraps of free time for writing, and at some point I decided to try working on the subway. I can actually be fairly productive on the train, but the conditions have to be right: as soon as someone sits next to me (or stands directly above me), my creative mojo begins to wilt. When I sense that someone is reading over my shoulder, I’ll reduce the zoom in MS Word to 80% or so, making it impossible for them to read it (and also making it very difficult for me). It’s not an ideal work environment, but, it’ll do in a pinch. (I don’t have any photos of me working on the subway, so below is an extraordinarily crude illustration. The POV appears to be of someone looking at me through the train window. That’s the back of my head. The guy next to me is reading over my shoulder. Not sure what’s wrong with his right arm, but, you get the general idea.)

Back when things weren’t so crazed at my current job, I would make use of my lunch-hour by sitting somewhere and doing a little typing. A lunch-writing spot has to meet the following standards: it can’t be too expensive; it needs to be the sort of place where I won’t feel like a jerk using my laptop; and I need to be able to have a modicum of personal space. There are surprisingly few places that meet these criteria, but the Landmark Diner on Broome Street is one of them. It’s a Greek diner that appears to be owned and run by a Thai family, and—perhaps due to the large windows, or the sweet waitresses—it possesses a unique, slightly enchanted atmosphere in which I can get some good lunch-work accomplished. 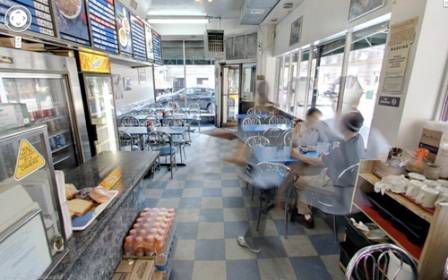 Once I’d finally completed a first draft of my novel, I discovered that I did my best editing in the bathtub, marking up printed-out pages with a Sharpie while soaking in Epsom salts. (I also find that I have my best book-related epiphanies in the shower. [Ideally, I should probably restrict all of my creative endeavors to the bathroom.]) 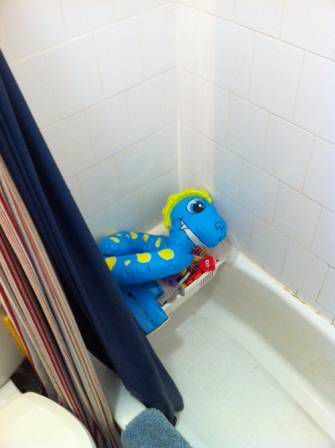 After the birth of my son, I found it particularly difficult to work at night, or in the early morning, or, really, any time, ever. And so: my new ritual is to drop him off a little early at daycare (I know you’re thinking that I am a bad parent; please stop judging me) and sit on a bench in front of a fancy hotel in the downtown neighborhood where my day-job is located and do a little bit of work on my second novel before I have to go to work-work. The constant influx of glamorous-seeming hotel-guests is somewhat distracting, but, over time, I’ve been able to slowly crank out some pages. (This picture was taken by a photographer from Films and Grains magazine who happened to be passing by, and—although I think it’s a nice photo—I’m pretty sure that I don’t normally have that Manson-style thousand-yard-stare. I’m going to go look at myself in the mirror again…) 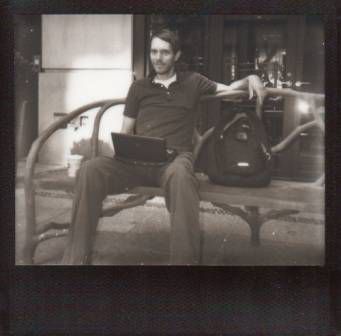 Matt Dojny‘s first novel, The Festival of Earthly Delights, was published by Dzanc Books in June 2012. It was called “a perfect summer read, armchair travel in a higher key” by the L.A. Times, and was named one of the “5 Best 2012 Debuts By Brooklyn Novelists” by The L Magazine. Visit him at www.mattdojny.com.