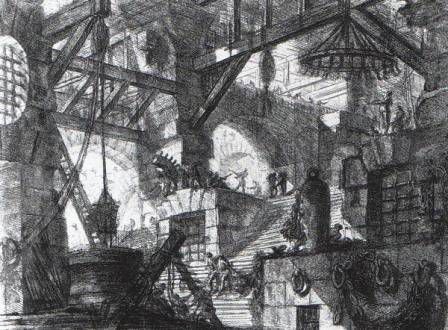 Seriously, how many modest rooms furnished to soothe and reassure their skittish occupants can we look at before we begin to suspect that we writers are, finally, less fascinating than we are deserving of sympathy?

This is the place in my head where I write.

On the left is a well, bored down to a subterranean lake; its iron bucket brings up eyeless, tentacled plotlines transparent as glass. Sometimes the underground lake gives up monumental heads in carved basalt or stelae crawling with illegible pictoglyphs. These must be raised by beam and trestle to the platform above and left to dry there, shedding tiny white copepods and bivalves while I scrutinize their markings. You see one here, a huge shrouded figure—a sarcophagus, perhaps, its two halves fused, or a triumphal statue. Its face, whose expression might have hinted at its purpose, is worn quite away.

Remote clanging echoes are heard here, the forging or sundering—depending on the kind of day I’m having—of giant chains.

I’ve chosen to put myself in this picture. That’s me rushing down the vast staircase in my billowing language cloak. I’m descending from the smoky upper galleries of my brain, where I’ve apprehended Yegg, a safecracker, fugitive for months. I tracked him through dim exhibition halls, past a diorama containing a plaster effigy of Bastinado receiving a foot-whipping. In a sculpture garden of sentimental religious art I startled Bondieuserie, simpering and faintly erotic; I caught her round the waist as I raced past and swore I’d be back for her. Still in pursuit of Yegg, I stirred the heavy puce side-curtains of the stage where Rebarbative and Rodomontade, resplendent in scratchy wool undergarments and parade armor, held forth before an audience variously bored and repelled.

Yegg I drag down to my work with me, fouled in my cloak. We’re both gasping, both smeared with soot and cobwebs. I’ll incarcerate him in one of the iron-grated vocabulary cells you see here, where he’ll live a circumscribed life—I admit it—but one with books and wine and occasional visitors. A life indistinguishable from mine, in fact.

I’ll go back for those others—the beaten thief, the coy saint, the boor and the braggart—when it’s time for them to serve a sentence.

M.F. Bloxam is the author of The Night Battles. Learn more at www.thenightbattles.com.