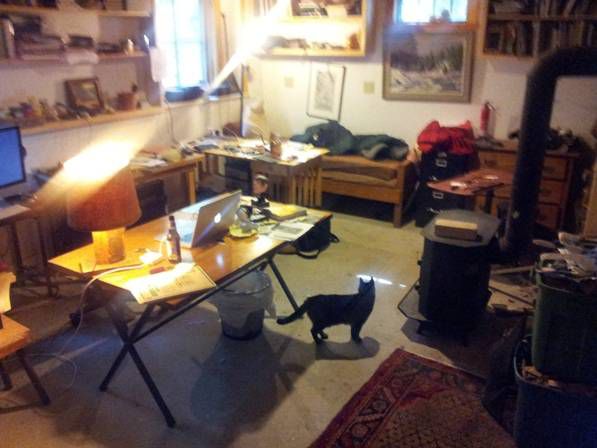 (Note: Ernest sent a note along with the photo: “The picture, which I took with my phone camera is shaky, which in a way is appropriate to my description of my work space.” Also, on a more personal note, I think he wrote an extremely modest bio. I can tell you that, at least in New Hampshire, Ernest Hebert is a legend, and I was thrilled that he agreed to participate. – LH)

The first time I heard a word that I wanted to use for my work space was back in grad school when my poet friend Reg Gibbons referred to his work space as “my office.” Ah, I thought, that’s it. The reason I can’t write is I don’t have an office. Of course most writers will understand that this kind of twisted reasoning is part of the career track. After a while you begin to recognize character flaws in yourself related to the trick-or-trick writing life, which leads to self-loathing, therapy, self-abuse, a novel, and if you’re lucky self-forgiveness, which actually may be just more phony baloney rationalization. Such is the writer’s life.

I’ve had a number of offices since I started writing as a matter of spiritual life and death back in the 1970s, and I remember them with the fondness one reserves for former lovers, mentors, and pets. My office is my nest and my temple, and without it I am homeless. Unfortunately, it is also often a shit hole. I get a moment of peace of mind when–after the rare occasion that I pick up, clean up, and straighten up–I realize that my office can be beautiful and ordered. Too bad I can’t write in that environment. My muse likes clutter until it looks the way it is at this moment as I type–writing instrument (laptop), empty beer bottle from last night, book (The Girl with Borrowed Wings by Rinsai Rosetti), head phones (which I use when I watch a repeat La Femme Nikita, Peta Wilson version), tooth brush (I’m a compulsive dry brusher), pens, paper, doll “yes man,” magazines (Texas Highways, MacWorld) lamp (that I made out of firewood), 3000 MOTS, a children’s book of French words that is part of my pathetic attempt to regain a language I spoke when I was four and five years old and that I abandoned so I could fit in, which I never did.

The view looking over the laptop is of the wood stove, boxes of kindling, cherry firewood that is very beautiful when you split it. Behind me is a desktop computer that I use for drawing images from my books. Besides the computer is a table holding a landline telephone, a modem, clumps of wires, a hand-carved wood tray containing keys that unlock objects long lost and forgotten, computer gizmos no longer relevant, a pencil sharpener that I screwed to the table top and that is now in the way. Above the table is book shelf holding DVDs, crap, manuscripts, magazines, and, yes, books.

To my right is more clutter: manila files (I have no idea what is them), a printer, a hand vacuum cleaner (used only once since I bought it six months ago in hopes of become neater). Behind the printer table is a three foot long, two foot high wooden tool chest, on top of which is an Olivetti Lettera 35 manual typewriter that I keep for old time’s sake. The tool chest holds back a cord and an half of firewood–sugar maple, ash, cherry, red oak–that I cut, split, and stacked myself. Some day, no doubt I will chain saw part of body to feed the crows.

To my left is a table that holds the MacAir that I use to type on when I am composing from my cot, which is beside the table. Below are boots, slippers, shoes, briefcase, bottle of booze, cheap plastic files containing yet more crap. Every office has to have cot or a couch, for napping, for musing, and for writing half here and half in la-la from the supine position. Over the cot is a crooked poster of Jack Kerouac holding a cat, a painting by Arthur Herrick, book shelf, crucifix left over from Catholic upbringing.

At the moment the office is missing my iPad, which I gave away to my daughter when she visited a couple weeks ago. I am awaiting a new iPad, which I will use for hand-written notes. I actually prefer to write on yellow legal notepads, but it’s a pain in the ass to organize such notes. The iPad apps Touchwriter and Penultimate allow for the organization of handwritten notes, which is actually quite useless since I never look back at old notes, but is good for giving me the illusion of organization, which leads to false confidence which is almost as good as the real thing and is necessary for this writer to produce transitive verbs.

Another missing item from my office is my collection of “sticks.” Back before my wife and I built a house in Westmoreland, NH, we lived in West Lebanon, NH, where we raised our two daughters. The girls and their friends had no respect for my literary career, so I was forced to build a faux cabin inside my garage to escape them. Along the edge of the ceiling I hung sticks, hundreds of them. I would cut them 16 1/2 inches long, notch the tops, tie a string round the notch, and hang sticks along the top of the walls. I thought they were very beautiful. When we moved I took the sticks down and burned them as kindling. Back in 1998 I had a tattoo made on the back of my hand of a stick with a string around it. It represents my identity as a maker: make a poem, make a novel, make an essay, make a drawing, make a wooden spoon, make a stick sculpture, make a mess.

Oh, one more thing: cat. Every office should contain a cat.

Ernest Hebert’s latest novel is Never Back Down, the life and loves over fifty years of Jack Landry, Franco-American working man.