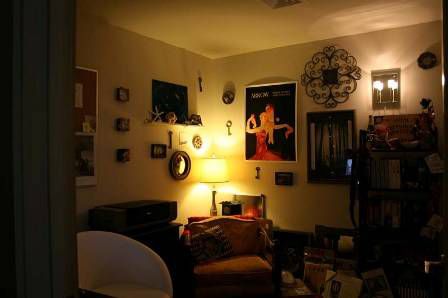 This is, alas, not a proper office. This is a windowless writing cave in an apartment I moved into last year and I will be vacating by the time 2013 rolls around. It is a temporary space, teeny but functional and thanks to Black Phoenix Trading Post it smells like mahogany and teakwood with swirls of cigar smoke, patchouli, tonka, cardamom, Spanish moss, and bourbon vanilla.

The next incarnation of Erin’s Writing Space will probably have a similar arrangement of the objects and furniture, though hopefully with more bookshelves and a window or five. It will likely smell the same, though.

The chair in the corner is older than I am and has followed me through all my post-college apartments. It used to have wicker panels on the arms but a couple of years ago I finally took them off and cleaned out the absurd amounts of older-than-me dust that had accumulated inside. Someday I might get it reupholstered, but for now I rather like the 70s goldenrod color and it is a very comfy chair to read in.

The general tone of the room is eclectic. It is fairly dimly lit and moody as I find a moody space good for losing myself in. There are a lot of Night Circus things in there (including a shelf of early galleys and the not-yet-hung but nicely framed artwork from the US cover) and other artsy bits and pieces: Nick Bantock postcards and skeleton keys, misty forests and koi ponds, mirrors and quotations and rogue playing cards. The vintage Arrow shirts poster is a bit of flavor inspiration for my next novel, which is not novel-shaped yet and will likely not become fully novel-shaped in this space. 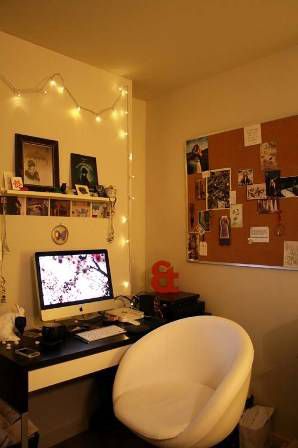 A few months ago my old desk chair died and I needed a replacement. I thought something brighter than a classic black chair would be good for brightening the tiny room but I mostly chose this one because it’s the same IKEA chair from the OK Go video for White Knuckles with all the puppies.

Also, I am now and always will be a fan of decorating year-round with fairy lights. I do so love twinkly lights on strings. 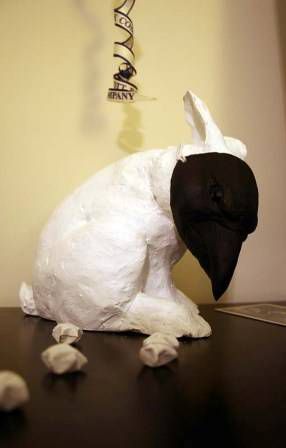 On the desk is a bunny in a raven mask that is mentioned in the letter-to-the-reader at the beginning of the Target edition paperback of The Night Circus. For anyone who did not believe there was a bunny in a raven mask sitting on my desk, here he is. He doesn’t have a name, but I get the sense he doesn’t want one. At least not just yet. I suspect he has identity issues. 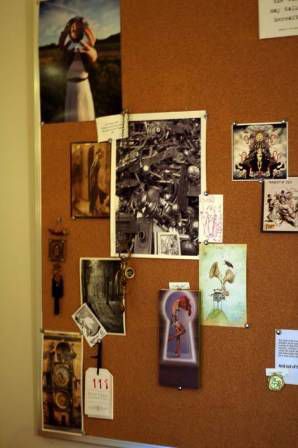 The large bulletin board is something between inspiration board and a place to hang small things so they don’t get lost on other walls. There’s a Chris Van Allsburg print from The Mysteries of Harris Burdick in the not-pictured corner, along with charms on red strings from various visits to Sleep No More and also a cat in a top hat and a penguin in a fur coat. I had not realized it before now, but the office is something of a menagerie. In various other locations around the room there is a tiny shifty-eyed sheep, a blue butterfly suspended in glass, a dog with wings and an ibis-headed Egyptian deity. 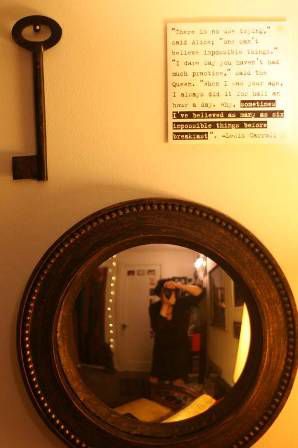 The room is so small that it is difficult to photograph and there is an entire wall I was unable to capture properly but you can glimpse it in this concave mirror self-portrait. It is not the most exciting of walls. Most of it is covered by a curtain made from recycled sari fabric. I’d tell you that the door behind me leads to Narnia or Wonderland but in truth it leads somewhere else entirely and I don’t think anyone behind it would be pleased if I divulged that information. 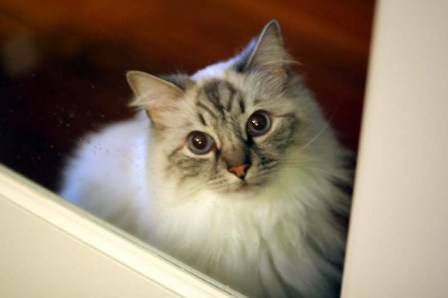 The actual door to the office that leads to the rest of the apartment is made of glass, so this is what I see out of it frequently because Tessa is not allowed in the office. I know she looks all sweet and innocent but she is fond of chewing electrical cords and thus must sit outside and look forlorn while I’m working. (Though most of the time she decides I’m boring before long and wanders off to take a nap somewhere more comfortable.)

It is a nice enough space, though it has a fleeting sort of feeling permeating it. A bubble of an office that will pop sooner rather than later, but hopefully the contents will find a more permanent home eventually.

Erin Morgenstern is the author of THE NIGHT CIRCUS and should really write some more books so she can have more things to list in her bio. She is working on that, really, but in the meantime she’s been writing teeny tiny stories dubbed flax-golden tales that can be found on her website. (Website also includes more pictures of kittens.)