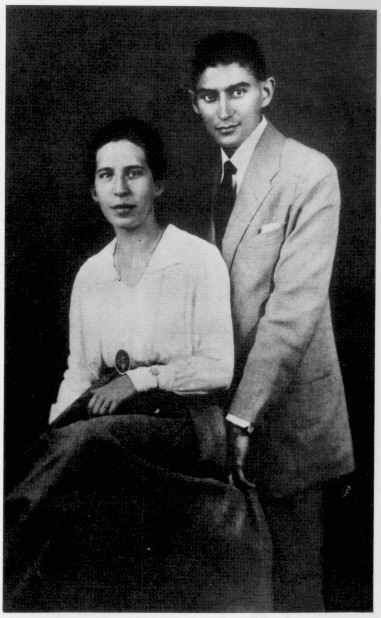 The one thing you can say about the love letters Franz Kafka wrote his to his on-again, off-again fiancée Felice Bauer is that they are not conventionally romantic. By “not conventionally romantic” I mean they are crazy-needy, super-duper creepy, a thousand percent depressing, and despite all these strikes these letters somehow manage to be oddly compelling and strangely endearing.

I would be the last person to recommend you use Kafka’s love letters to Bauer as a template for your own. If you want your words to get you some action, you’re much better off sticking with the barely-controllable passion of Miller and Nin or the booze-drenched poetry of Fitzgeralds.

…either you feel nothing but compassion for me, in which case why do I insist upon your love, obstruct your every course, force you to write and think of me every day, tyrannize you with a helpless man’s helpless love? Why, instead, don’t I try to find a way of gently helping you to free yourself from me, of quietly by myself savoring the knowledge of your compassion for me, and thus at least becoming worthy of that compassion?

I guess… we learn here… that if you’re going spew self-hatred all over your stationary… at least be articulate about it? I don’t know man, if I was Bauer getting this in my mailbox, I would be like “Thanks for your letter, I’m going to run screaming into the night now, okay, bye.”

I should want to drag you, eternally dearest, down to the dreadful decrepitude that I represent.

Why do I find this weirdly sexy! Note I said weird! But note I also said sexy! That “eternal dearest” is a sick nickname. “Dreadful decrepitude” is an alliterative gem, I hope it’s got the same ring to it in the original German. That line kind of makes me want to make out with Kafka a little. What REALLY makes me want to make out with Kafka is his short story “The Hunger Artist”, but this letter was written in 1913, he won’t write that miniature masterpiece for another decade. So for now I’m safe.

For it is I alone who carry all anxieties and fears within me, as alive as snakes; I alone who scrutinize them constantly, and only I know what they are. You know about them only from me, only from my letters, and what you learn about them from these letters bears—in its horror, persistence, magnitude, and invincibility—even less relation to reality than does my writing, which heaven knows is little enough.

“Can you keep a secret? I’m super f—-ing crazy,” should NOT work as a pickup line. It shouldn’t, BUT in the sickest of ways it kind of does because when you make someone a secret-keeper, you give that person all kinds of power over you and power is sexy-times. Also describing your fears as “alive as snakes,” I KNOW that shouldn’t be hot, I KNOW that shouldn’t be, but what can I say, my heart can’t help but go all aflutter at a great simile.

The life that awaits you is not that of the happy couples you see strolling along before you in Westerland, no lighthearted chatter arm in arm, but a monastic life at the side of a man who is peevish, miserable, silent, discontented, and sickly; a man who, and this will seem to you akin to madness, is chained to invisible literature by invisible chains and screams when approached because, so he claims, someone is touching those chains.

Again, this is hot in such a roundabout way it’s BARELY hot. It’s really hard to make “We are NEVER going to be happy” sound appealing. I do really like that whole bit about being chained to invisible literature. “You can never really have me because MY WORK IS MY WIFE AND IT’S EATING ME ALIVE STARTING WITH MY HEAD.” That’s laying down the gauntlet. It’s a really depressing gauntlet. A depressing gauntlet is still a gauntlet.

(It should be noted that I hear he gets a little sexier later on in his letters to his mistress Milena Jesenka. Maybe we’ll do a sequel post on that to redeem Sir Pities-Himself-All-The Time.)

Anyone writing a love letter to their eternal dearest this week?