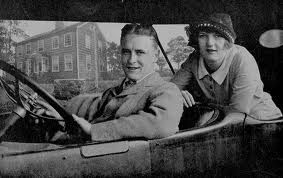 We’re back with another Write a Love Letter Like a Writer! Yes, Valentine’s Day has come and gone. However love letters are NOT seasonal. They are welcome January through December! And in our world of one-line memes and 140-character tweets, getting a snail-mailed letter filled with page after page of grand and epic love? That’s the best kind of mail I can imagine.  We learned a couple neat tricks from hot-as-all-get-out Anais Nin and Henry Miller, now let’s take a page (literally) from infamous Jazz Age duo Scott and Zelda!

(It’s in all caps because it’s a telegram. Why don’t we send telegrams anymore? Telegram-sending is 18,000 times sexier than texting.)

DARLING HEART AMBITION ENTHUSIASM AND CONFIDENCE I DECLARE EVERYTHING GLORIOUS IN THIS WORLD IS A GAME AND WHILE I FEEL SURE OF YOUR LOVE EVERYTHING IS POSSIBLE.

I feel like you had me ordered- and I was delivered to you- to be worn- I want you to wear me like a watch-charm or a button-hole bouquet- to the world.

I know that Zelda wasn’t the famous writer in the relationship, but hot damn could that girl work her imagery. I’m obsessed with this idea of your special someone wearing you for the world to see–let’s make this a love-letter staple. Also I want watch-charms and button-hole bouquets to be things that are still, like real things.

Nobody’s got any right to live but us- and they’re dirtying up our world and I can’t hate them because I want you so.

I love this twist on the “You’re the best” love letter trope. No, YOU’RE not the best, WE’RE the best.

For my darling wife, my dearest, sweetest baboo, without whose love and aid neither this book no any other would have ever been possible.

All right, this is a little bit of a cheat, because it’s not actually a love letter to Zelda, it’s his dedication to her in his second novel The Beautiful and the Damned. Still, I’m using it because it illustrates how ACES the Fitzgeralds were at mushy-gushy nicknames. Scott was calling Zelda his sweet baboo before Sally Brown and Linus Van Pelt were even a twinkle in Charles M. Schulz’s eye!

Zelda frequently called Scott “Goofy” (“Goofy, my darling, hasn’t it been a lovely day?” she writes him in 1919), and frequently referred to the two of them as “The Goofos”, which is the best couple nickname since couple nicknames started sucking (Brangelina, Bennifer, Barf).

I keep the light burning on your desk so that I’ll think you’re there when you wake up, but then it’s awful to have to turn it out when it’s day.

This line just breaks my heart. It’s a great love letter tactic to write about how adorably sad you are when your loved one is away.

It was wonderful to sit with her head on my shoulders for hours and feel as I always have, even now, closer to her than to any other human being… and I wouldn’t mind a bit if in a few years Zelda and I could snuggle up together under a stone in some old graveyard here. That really is a happy thought and not a melancholy one at all.

“I want to grow old with you,” has become an eye-roller of a cliche. “I want to snuggle up with you under the same tombstone” still has a lot of bite–equal parts cute-boots and spooky-pants!

Dearest, I am always grateful for the loyalties you gave me and I am always loyal to the concepts that held us together so long… Nothing could have survived our lives.

That “Nothing could have survived our lives” just kills me. If something went off the rails between you and a former love, just blame it on, like, the craziness of life! I’m stealing this line hard so I never have to take responsibility for anything ever again.

It’s odd that my old talent for the short story vanished. It was partly that times changed, editors changed, but part of it was tied up somehow with you and me—the happy ending…

This is really depressing. Also, this is the year Scott died, which makes it doubly depressing. Possibly triply. But if the Fitzgeralds’ letters to each other show us nothing, it’s that you actually can be super f—ing depressing and super f—-ing romantic at the same time.

Now go write a love letter like a Fitzgerald! Be prepared for smooches!