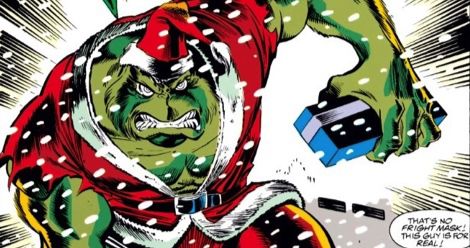 Like the song says, Christmas is just around the corner! Lots of people are getting ready to celebrate, and that includes many of your favorite superheroes. But superheroes are infamous for finding trouble no matter the occasion, and unfortunately for them, that includes the holidays. That’s good news for us fans, though. Who wants to watch Superman peacefully sip eggnog with his security robots at the Fortress of Solitude when we can watch him kidnap a child who doesn’t have the proper Christmas spirit?

Answer: me. I want to see that. But that’s not what this article is about. So let’s commemorate the season by reminiscing about the very worst ways our heroes have spent the most wonderful time of the year! 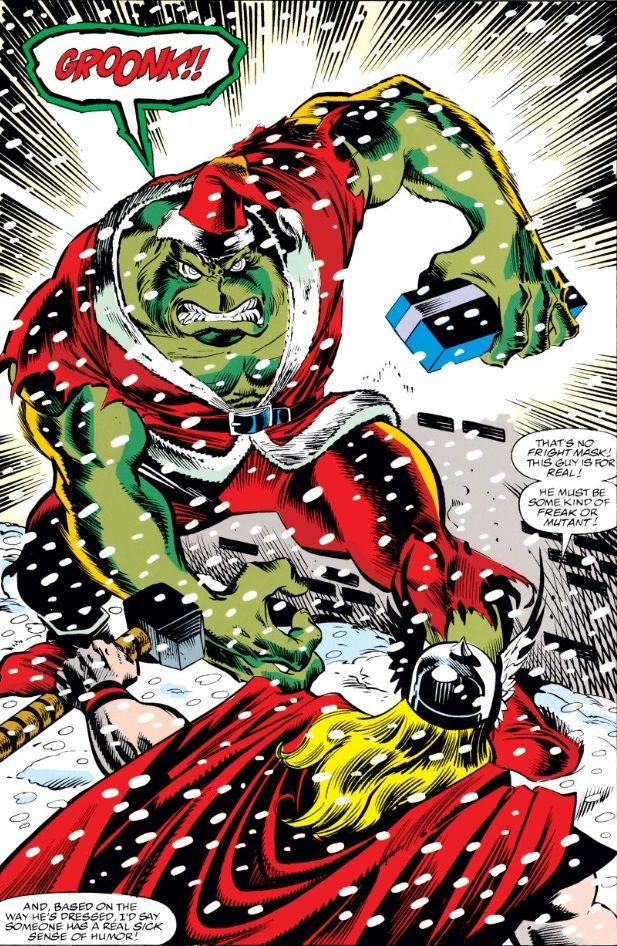 In Christmas of 1991, Thor spent the holiday season trapped by the demon Mephisto. Meanwhile, his successor, Eric Masterson, was trying to figure out how to balance being a hero and a good dad.

Eric’s skills are put to the test by a mysterious creature called the Groonk, who has been stealing people’s Christmas presents. After a mall-wrecking fight, Thor follows Groonk into the sewers, where he encounters a little girl named Cindy Lou and her dog, Max. Yes, really. Turns out Groonk is a reverse Grinch: he stole other people’s Christmas so that his homeless friends could have a nice holiday.

Thor elects to take the stolen goods back without mentioning Groonk’s involvement, at which point Captain America chews him out for his recent spate of poor decisions. Imagine trying to celebrate anything after Captain America himself tells you you’re letting the world down.

Christmas with the Joker

In this early episode of Batman: The Animated Series, the Joker decides to spread some yuletide cheer…to himself. He kidnaps three people and, in a ghoulish parody of a holiday special, vows to televise their murders if Batman and Robin can’t jump through his deadly hoops fast enough.

This was not on Robin’s Christmas Eve agenda. The Boy Wonder just wants to watch It’s a Wonderful Life, but no, he has to battle his way past killer toys while public domain Christmas music plays in the background. Maybe Batman was right and life isn’t so wonderful after all. 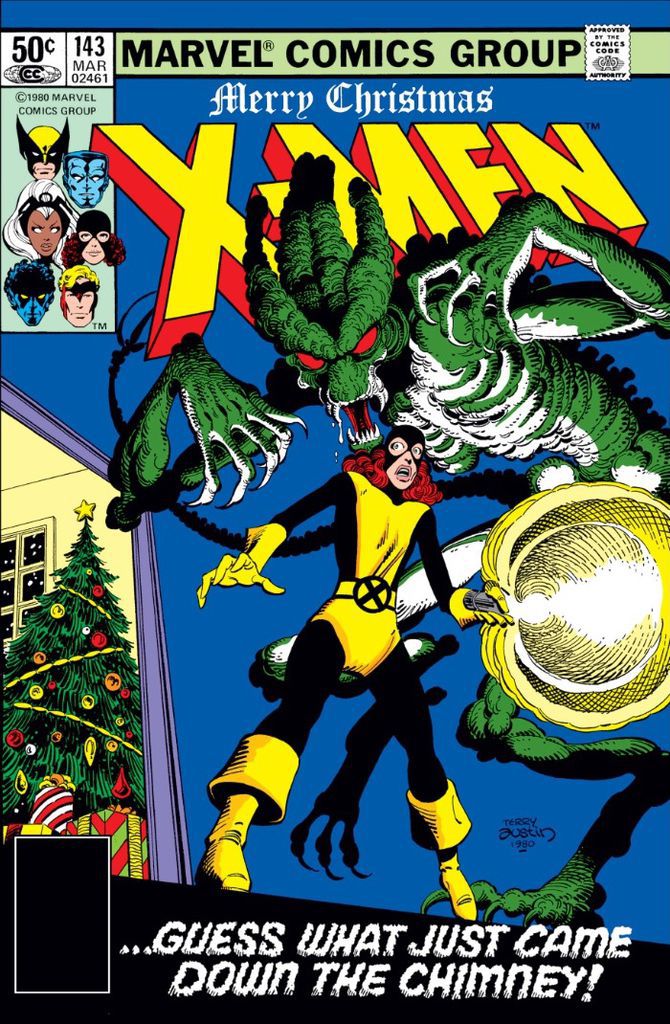 Not a creature was stirring…

Spending the holidays away from home for the first time can be tough. Kitty Pryde found that out the hard way during Hanukkah 1980. While the other X-Men are out celebrating Christmas, Kitty tries to call her parents to wish them a happy Hanukkah. She doesn’t reach them before an Alien knockoff shows up and chases her around the mansion.

Kitty manages to put the thing out of commission, but not without destroying half of Xavier’s school. Presumably, Professor X’s present to himself that year was a lot of booze followed by a call to his interior designer.

Gee, Batman doesn’t seem to have a good handle on Christmas, does he? This 1992 movie is one big bag of anti-cheer. The Penguin, in a plot swiped directly from the ‘60s TV show, schemes to become mayor of Gotham City. First, however, he must discredit Batman, which leads to a scene where a beauty queen falls off a building and onto a Christmas display. I’d say that this surely traumatized Gotham’s children, but honestly, if there are any children left in Gotham who haven’t already been traumatized, that’s a real Christmas miracle.

It wasn’t a great Christmas for Warner Bros, either. Batman Returns got two Oscar noms, but it was criticized for its dark, nasty tone by parents who thought it was a good idea to take their kids to a PG-13 film. In response, Warner Bros tried to “lighten up” their Batman flicks, which ultimately led to the franchise-killing Batman & Robin. 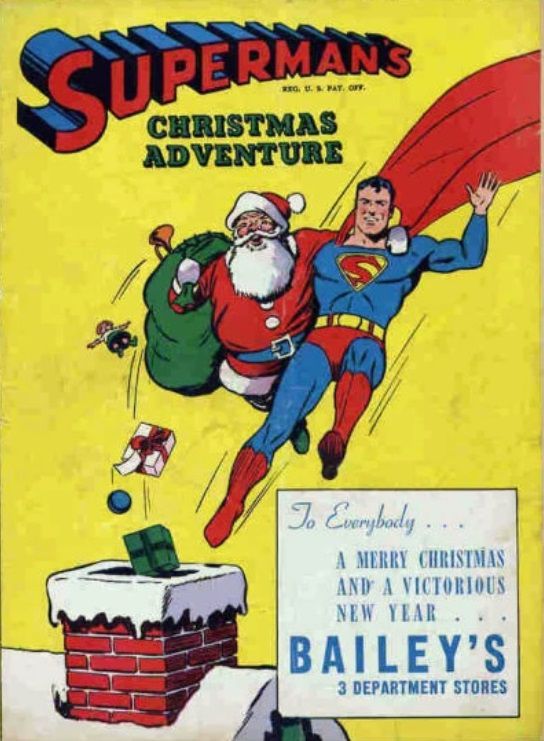 This comic tries very hard to be A Christmas Carol Co-Starring Superman and fails. For starters, our “Scrooge” is a child: James, a spoiled rich brat. Superman finds out about him and his poor attitude when he uses his x-ray vision on James’s house for absolutely no reason.

Supes decides to go full Jacob Marley on the kid. In the middle of the night, he breaks into James’s house and carries him off to the poor side of town. He then forces James to watch other, worse-off kids suffer through a toyless Christmas. James seems to learn his lesson, but I assume he’ll be asking his parents for a therapist this Christmas instead of the yacht he originally wanted.

To say that Iron Man has a little trouble with alcohol is like saying people who go shopping on Thanksgiving have a little trouble respecting their fellow human beings. Iron Man has relapsed multiple times, including once right around the holidays. As such, he got to ring in 1995 by relating his entire tragic backstory at an AA meeting. He followed that up with a marathon of B movies starring a recently deceased friend. About the only thing that saved the holiday for him was a visit from his ex-girlfriend, Bethany, and her gift of non-alcoholic champagne. 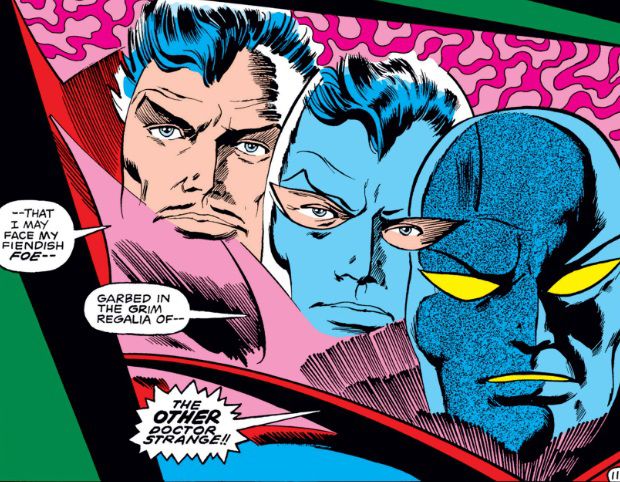 Doctor Strange did not have a great New Year’s in 1968. All he wanted to do was hang out in Times Square with his lady friend, Clea. And what did he get? The villain Nightmare attacking New York with dinosaurs and blabbing his secret identity to the entire city. Luckily, the universe itself stepped in and gave Strange a new secret identity—“Dr. Stephen Sanders”—as a show of gratitude for kicking Nightmare’s butt. Too bad the universe couldn’t do anything about the blue bodystocking Strange was wearing at the time.

Fear not: the numbering is correct. Countdown, true to its name, starts at issue 52 and counts down to 1. It’s a pretty dumb series, so having to spend Christmas in it at all is terrible. But things go from bad to worse for the Atom, who had escaped to an alternate universe after his wife went on a murder spree. Atom finds peace on Earth-51, which is so idyllic that all superheroes have retired. This leaves the world woefully unprepared when trouble returns.

Just as the Atom is settling in for a nice Christmas with his fellow ex-heroes, a Monitor shows up. Monitors don’t like it when people skip around the multiverse without permission. The resulting fight ends with most of Atom’s friends and family getting fried. Would it be tacky to sing about heroes roasting on an open fire?