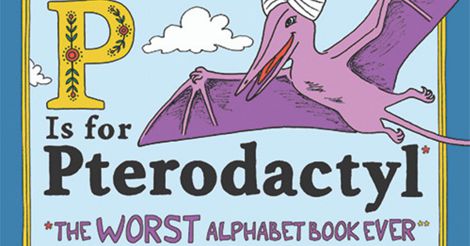 The self-declared “worst alphabet book ever” has become a surprise hit over the last fortnight, with hundreds of thousands of parents rushing to get their hands on P is for Pterodactyl: a picture book that explains to children that while A might be for apple, it’s also for aisle.

Dreamed up by Raj Haldar, also known as the rapper Lushlife, with computer programmer Chris Carpenter, P is for Pterodactyl was published by US independent Sourcebooks on 13 November. The first print run of 10,000 copies sold out almost immediately, with the publisher now reporting more than 100,000 unfulfilled orders as they wait for a reprint of another 210,000 copies . Demand has also spiked in the UK; sales representative Rob Richardson said that social media buzz after a Facebook post from Imagination Soup saw sales spike from five to 3,000 orders overnight, with an additional and “pretty unprecedented” 10,000 advance orders the next day.

Delighted that a picture book about the English language’s “quirks” is getting some love.

Speaking with novelist and MacArthur genius grant winner Adichie in front of the live audience, Obama said, “I still have a little impostor syndrome — it never goes away, that you’re actually listening to me.” She continued, “It doesn’t go away, that feeling that you shouldn’t take me that seriously. What do I know? I share that with you because we all have doubts in our abilities, about our power and what that power is.”

“If I’m giving people hope then that is a responsibility, so I have to make sure that I am accountable,” she said. “We don’t have any choice but to make sure we elders are giving our young people a reason to hope.”

Can Michelle Obama’s book tour go on forever, please? Or someone give her my number. Either works.

She caught your eye with The Wedding Date. She gave you butterflies with The Proposal. Now she’s here to seal the deal with The Wedding Party. Jasmine Guillory’s new romance novel, out in July 2019, is just as swoon-worthy, dreamy, and romantic as her first two books, and Bustle has an exclusive first look below.

The Wedding Party centers on Maddie and Theo, who have two things in common: Alexa (from The Wedding Date) is their best friend, and they hate each other. Except… they didn’t quite hate each other that one night that was definitely a mistake. Definitely, absolutely, seriously a mistake. Now, with Alexa’s wedding rapidly approaching, the two must set aside their differences (and their simmering attraction to each other) to help her throw the party of her dreams. But they can’t deny their undeniable physical chemistry for long, and they eventually start meeting in secret, under one condition: the secret rendezvouses will end when the wedding is over.