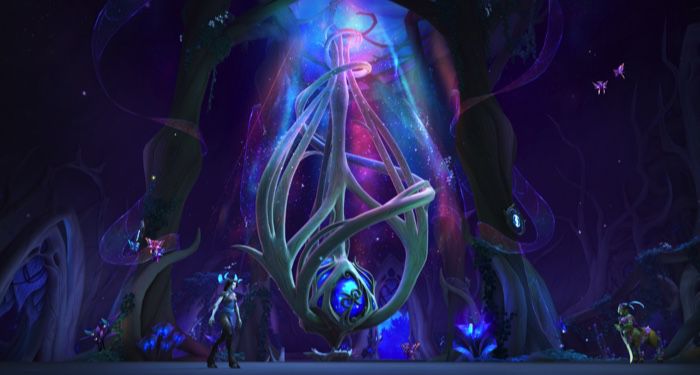 My relationship with World of Warcraft (WoW) goes back to high school when the first expansion pack was released. Back then, consoles didn’t connect to the internet as standard practice, so massively multiplayer online role-playing games (MMORPG) held a unique place in the gaming world. People could play together online, going on epic quests and exploring new continents—all without ever meeting in person. I cannot describe how revolutionary this idea was to me as a disabled teenager stuck inside and feeling separated from the rest of the world.

For those who haven’t spent countless hours submerged in WoW, the gist of the game is to create a character by choosing your race (e.g. Night Elf, Orc, Human, Troll, etc.) and class (e.g. Priest, Rogue, Hunter, etc.). Different races are allied with either the Alliance or the Horde, two groups who have been fighting each other for generations. During gameplay, you travel around the world from zone to zone, completing quests and slaying enemies to gain experience points to level up your character.

When I first started playing back in 2007, The Burning Crusade, the first expansion pack, had just been released, and I instantly fell in love with the incredible scale and depth of the game’s world-building. At the time, I primarily listened to audiobooks through the Overdrive program I downloaded to my computer, so I would play them in the background as I completed quests and leveled up my characters. Alternatively, I’d plug my headphones into my CD player and listen to audiobooks I checked out from my library. Either way, I quickly discovered that, to me, there was no better activity than listening to audiobooks and playing WoW, and I flew through books like The Great Tree of Avalon by T.A. Barron, The Thief Lord by Cornelia Funke, and The Goose Girl by Shannon Hale.

When I went to college, I quit playing WoW to focus on school, but I desperately missed it. Five years later in grad school, I caved and combated stress by downloading my old favorite. By then Mists of Pandaria had been released, and once again I discovered new worlds and battled my way through new storylines.

I quickly realized that the audiobooks I listened to as a kid came to mind whenever I would revisit those zones or complete familiar quests. While I once again fought my way across the Hellfire Peninsula and through the Zangermarsh, I remembered Terrier by Tamora Pierce or Eragon by Christopher Paolini. How odd, I thought. Why is it that I can’t visit these old zones without thinking of specific audiobooks I’ve listened to in the past?

In grad school, improved technology made getting my hands on audiobooks quite a bit easier. I listened to classics like The Bell Jar by Sylvia Plath, A Voyage Out by Virginia Woolf, and The Joy Luck Club by Amy Tan, which are the books I most easily remember now as I revisit the different continents and battle familiar enemies.

After graduation and yet another break, I logged back on in 2017. I remember gasping at the end of The Unquiet Dead as I ran through the Eversong Woods. A big reveal in One Dark Throne happened just as I was in the middle of a quest in the Swamp of Sorrows, and my poor character died horribly as I became totally distracted by Kendare Blake’s excellent plot twist. I even spent two days flying around Shadowmoon Valley listening to Her Body and Other Parties by Carmen Maria Machado, hoping that if I stayed in the same zone that audiobook would never end.

I signed on again just last week. My 120-level Blood Elf Hunter, Abhorsen, who’s been with me for all this time, still looks ready to pull out her bow and slay deadly enemies with a single shot. Her companion, a silver-blue fox (very originally named Lawrence for D.H. Lawrence’s The Fox) scratches his ginormous head (he’s the size of a small horse) while still managing to look ready to offer violent defense if attacked.

Even after a decade of gameplay, I still remember the audiobooks I listened to while questing in the different zones, my memories combining the two until they become one single activity. I’ve discovered new authors in Azeroth, mourned the loss of my favorite book characters on the battle field, and explored new genres across continents of possibilities. Whether it’s hitting play on an audiobook app or logging into my favorite MMORPG, for me it’s all about opening a door in my imagination, walking through, and discovering new worlds.