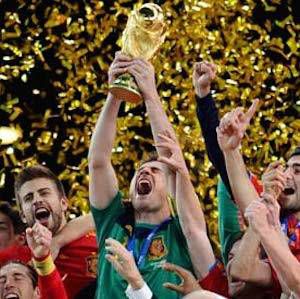 For several years there was a quiz night in Edinburgh whose very existence offended me. Because it was a quiz for artistic and creative people, its organisers said, there would be no sports round. A love of creativity and a love of sport were deemed mutually exclusive.

A cursory glance at even the most threadbare library will prove this to be utter piffle. Sport and art drink deep from the same well. American novelists have long used baseball as a cypher for, well, almost everything. The likes of John Irving, Don DeLillo, Philip Roth, and Chad Harbach have all hit home runs on behalf of those who love both sport and the written word. David Foster Wallace was as obsessed with tennis as he was the light and shade of grammar. Norman Mailer used The Fight to go toe to toe with Muhammad Ali’s ego.

Which brings us to the point of not only this post, but of the entire next month – that’s right, it’s the World Cup. For four weeks in twelve cities across Brazil, 32 countries will battle it out in 64 games to decide who will go home with the greatest sporting trophy of them all. Nation will rise against nation. Victors will bring their countries to a standstill. Legends will be made, hearts will be broken. It’s the stuff of epic Greek poetry.

Curiously when it comes to literary heft, compared to other sports, such as the aforementioned boxing and baseball, football (or ‘soccer’ to a decent chunk of the world) punches well below its weight. The reasons for this is perhaps best kept for another post.

In the meantime, here’s a handy list of some of the best books – both fiction and non-fiction – to read if you want to double down on football during the next month. A friend told me that one of these books was an answer in that Edinburgh arts quiz. It seems that sport is irresistible after all.

Futebol: The Brazilian Way of Life by Alex Bellos

Brazil is a footballing Never Never Land. Growing up on these grey European shores Brazil was as a fantasia where legends with amazing names like Pele, Socrates, and Zico displayed their otherworldly skills on golden beaches, all dripping in exotic technicolour and with a sultry beat in the background. Such was their mystique back in the 1980s, that when a European side contained a Brazilian it was as if they went into battle with a unicorn. Brazil has long been a byword for footballing sorcery. The rest of us are mere muggles. They get football. And now, after 64 years, Brazil is finally hosting the greatest tournament again. It is the perfect time to revisit Alex Bellos’ masterful book about the Brazilian’s fascination with football, and our fascination with Brazilian footballers. Naturally, Futebol: The Brazilian Way Of Life take some of the sheen off the myth. Yes, their love of football is intense, but occasionally in a creepy-violent kinda way. Supporters have been known to attack their own team bus should they underperform. In light of the recent street protests about the Brazilian government spending money of the World Cup rather than education and health care, the idea that football means everything in Brazil frays at the edges. But Bellos does a cracking job of investigating why football in Brazil contains that extra sprinkling of fairy dust.

The Damned Utd by David Peace

One of my favourite books since the turn of the millennium, The Damned United focuses on 40 doomed days in 1974. Brian Clough had just become manager of Leeds United, England’s biggest team at the time. As part of his charming man-management style, Clough used his first team talk to accuse them of cheating to win their previous trophies. It disintegrates from there. But it is the way that Peace tells the story that elevates it into possibly the best novel ever written about sport. We are trapped inside Clough’s head, waist-deep in his stream of consciousness. Repetition, repetition, fragments, paranoia, venom, repetition. It is mesmeric stuff. Clough emerges as a tragic, pitiable anti-hero. The reader emerges battered and befuddled, as if on the receiving end of a Billy Bremner tackle. Peace’s next book, Red or Dead, turns his sights on another of football’s angels with dirty shin-guards, Liverpool’s formidable manager, Bill Shankly.

Best book for… unashamedly bragging about being a football superstar

I Am Zlatan by Zlatan Ibrahimovic and David Lagercrantz

Zlatan is a magnificent bastard. Here’s a sample sentence from page 2; “I was amazing”.  From page 5: “In spite of my new position I carried on being brilliant”. And it doesn’t deviate from that tone. When it comes to autobiographies it is understandable that ‘I’ is the most common word. But Zlatan seems to have supercharged this pronoun. His teams – Malmo, Ajax, Juventus, Inter Milan, Barcelona, AC Milan – only exist to service his legend and the contents of his garage. His biography, published last year, is a delicious insight into what its like to stand on football’s pedestals, and what it takes to get there. Born in Sweden to immigrants from the Balkans, after £150m of combined transfer fees Zlatan currently plays  for Paris Saint-Germain. He will not be at the World Cup this year. Sweden failed to qualify. On the evidence of this book, it is a poorer place for it. He is probably football’s prime spouter of what the Italians call braggadochio, what we call balls, and what he calls self-evident truth. He slaughters some of contemporary football’s sacred cows (most notably legendary Barcelona manager, Pep Guardiola), all at the altar of Zlatan. He is the high priest of his own ego. While it’s literary merits don’t dazzle, its brazenness is hugely entertaining.

How Football Explains the World by Franklin Foer

Football comes with a hefty amount of baggage. The best and the worst of humanity can be found within its 90 minutes. Foer’s book is a great primer on what football symbolises around the world and through history. Football has been used as stand against tyranny – witness Barcelona fans using games as the only acceptable way to defy General Franco or the occupied Ukrainians who in 1943 refused to let the Nazis win in an exhibition match (they won 5-3). But it can also manifest some of our darkest hours. If you want to see a proxy for the sectarian violence that ripped through Europe several hundred years ago, go see a Rangers vs Celtic game in Glasgow. More recent genocidal passions have been channeled through the support of Red Star Belgrade in the Balkans. Yes, it is a bit simplistic in places, but as a thesis, Foer makes a compelling case that for every social and political movement out there, there’s something in football for that.

Being a fan sucks. Time, energy and emotion are poured into the object of your affection only for it to constantly slap you in the face, let you down, and forget to buy the milk. The euphoric moments are infrequent; failure is the dominant hue. And you can’t escape – you are bonded to your team by accidents of birth and blood. It is like being in an arranged marriage to the most pathetic spouse in a land that has outlawed divorce. Nick Hornby nicely captures the masochistic nature of fandom in Fever Pitch, his 1992 biographical tale of his relationship with Arsenal. If you are looking for an articulation of what it means to be a fan of anything, let alone football, look no further: “So please, be tolerant of those who describe a sporting moment as their best ever. We do not lack imagination, nor have we had sad and barren lives; it is just that real life is paler, duller, and contains less potential for unexpected delirium.” Preach it Nick.