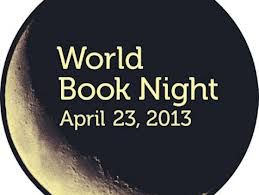 Book Riot Contributing Editors Amanda Nelson and Kit Steinkellner talk about the selections for World Book Night US below:

Kit Steinkellner: I’m really impressed with World Book Night US and their selections. I would be so much snottier.

KS: I’m just going to say it, I’m not sure about some of the classics they picked…

AN: GIRL. I have FEELINGS about those classics. Mark Twain is great, but CONNECTICUT YANKEE? Whhaaa?

KS: I really do get picking HANDMAID’S TALE and FAHRENHEIT 451. But I didn’t understand MY ANTONIA and, right, CONNETICUT YANKEE as much.

AN: I think MY ANTONIA was picked for maybe some of the same feminist-y reasons that the Atwood was picked. Cather’s easy to read, too–no complicated, convoluted prose.

But the Twain I don’t understand at all. It’s full of these super-long speeches by the Arthurian characters that are so boring and incomprehensible because they’re written in Olde English vernacular.

KS: What Twain book would you have picked?

KS:  Me too. You can sell that in a sentence! And as someone who participated last year, I’m speaking from firsthand experience when I say you really have to SELL these books. People think you’re trying to give them a Mormon bible or cult literature if you can’t sell it in a really quick sentence before they have time to walk away.

This year, I’m going to make, like, a lemonade stand or sandwich board fully explaining what World Book Night is and being very clear about the fact that I’m just trying to get good books in the hands of good people and am NOT trying to get anyone to join a Child Bride Cult in the Backwoods of Nowhereland .

KS: I LOVE THAT! It warmed my heart.

AN: I do, too, though I think it will be a hard sell. In my head, poetry is like…beyond classics in the hierarchy of Shit That’s Hard To Read, Especially If You Don’t Like Reading.

KS: You know, the thing about the poetry collection (and this is true of all the picks), I think whether it’s a high or low percentage choice is based SO HARD on where you’re handing out. Like on your average, everyday street, I don’t think poetry flies. But if you go to a homeless or battered women’s shelter, I think that could be a really perfect handout.

AN: Oh GOOD CALL. Kelly at Fountain gives her box to the women’s prison. That would be a good pick for that.

KS: I mean, looking over this list, it really feels like the primary goal was to get something for (almost) everyone in there.

KS: Right, but there actually ARE kids’ books this time around.

AN: You know, as a bookseller, I look at this list and I automatically start formulating a target customer. And from these books, it would be three people: adolescent/young boys, middle-aged women, and Very Manly Men

KS: Maybe that’s why I’m finding less of “my tribe” in this selection, because I’m not any of those things.

AN: Ditto: You can tell the list is formulated by booksellers and librarians. They think of their toughest customers, and young boys are certainly in that category.

KS: But the thing about the kids’ books is you’re giving these books out to random souls AT NIGHT, so I’m less inclined to pick the kids’ books because I don’t want to be a creeper talking to strangers’ children!

KS: I can see being a parent and being able to give out books to the kids your kid knows.

AN: Or maybe giving them to your kid and letting him/her hand them out at school or something? Is that against the rules?

KS: I think the idea of giving a million books out over the course of a single night is so magical and romantic and cinematic, but I think the point is to give books to people who need to read, so I think anytime that day (or week, or whatever) or any giver works as long as people get their books!

On that note, have you picked your books/the place you’re handing out yet?

AN: I dunno! I’m conflicted. I think I’m going to try for THE HANDMAID’S TALE, but the place is TBD. I like the thought of a women’s shelter

KS: I think that would be a great choice for a women’s shelter.

AN: What about you? Hollywood Blvd again?

KS: Once was ENOUGH for me! Actually, I’ve been taking the LA Gold Line (the subway that goes through Pasadena and Downtown) a lot lately, and I think handing books out on the subway would be really fun.

AN: I didn’t even know LA had a subway.

AN: So overall, I think this year’s list is more commercial But that that is an EXCELLENT thing.

KS: Right, this isn’t Amanda and Kit’s FancyPants Book Night. This is WORLD BOOK NIGHT. It’s for the WORLD!

AN: And, as we all know, Amanda and Kit are not the world. (this is actually the first I’ve heard such a thought).

So what did YOU guys think of the list? Anything completely hit or totally miss for you? What were your surprise moments?