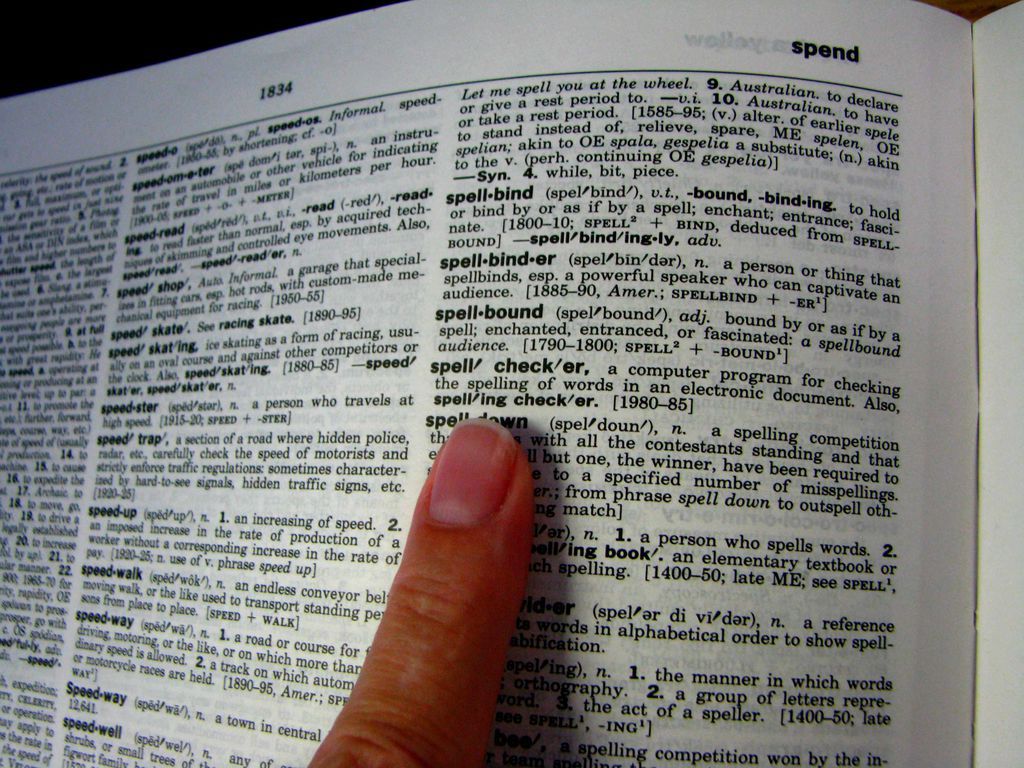 The Publishers Weekly blog ran a piece by Gabe Habash entitled Every World I Learned From ‘Infinite Jest‘. If you’re familiar with David Foster Wallace’s mammoth tome, the length of the list and the obscurity of many of the words probably won’t surprise you. I had a similar experience with Jest, but for some reason “chtonic–relating to the underworld” is the one that always comes back to me.

But the article got me thinking. One of the greatest tools for a writer is an expansive–assuming you can use it for anything besides showing off and being obnoxious–vocabulary. And however expansive my vocabulary is or is not, I owe it to the amount of books I’ve read.

I made a list of a few words I specifically remember learning from books. All definitions from dictionary.com.

A piece of tough, fibrous tissue uniting muscle to bone, or bone to bone

Learned from: Island of the Blue Dolphins by Scott O’Dell

Young Karana is marooned on an island. She proceeded to have many adventures and close calls, and she also proceeded to use “sinews” to bind and fix just about everything. Sinew was the duct tape of the island. I’ve never forgotten it.

Impossible to understand or interpret

From the first of the Gormenghast books. Gormenghast exposed me to approximately one billion things I’d never felt or considered before. There’s truly nothing like it. It is, if I had to choose a word, inscrutable. If you’re unfamiliar with the series, I won’t try to describe the plot to you, but these books create a mood that I’ve never even come close to feeling in anything else. If you can steer me to anything you think I’d like based on this statement, I’d be grateful.

A mixture of oil and balsam, consecrated and used for anointing at baptism and in other rites of Catholic, Orthodox, or Anglican churches

Learned from: The Oxford Writer’s Thesaurus

I have a favorite Thesaurus. It includes lots of lovely mini-essays on words the editors (including David Foster Wallace and Zadie Smith) were enamored of. Chrism was one of those. It’s a pretty word. Say it out loud. Harder to find a use for it in chitchat, but I like how it sounds.

An extreme accumulation of fat on the buttocks

Learned from: The Superior Person’s Book Of Words by Peter Bowler

What superior person wouldn’t need a word like this in his obfuscated-insult holster? I honestly don’t think I knew more than ten of the words in this book.

Lots of words about sex:

Learned from: Many, many Dean Koontz books.

I liked the gore and monsters in Koontz novels. My junior high phase was pretty much just a rotation of Terry Brooks, Piers Anthony, Stephen King, and Koontz. But Koontz was the one who drove my teenage self wild with his ridiculous love scenes. I had no idea that phrases like “hidden nubble” weren’t sexy yet. But wow, back then, it was good for what ailed me. Twilight Eyes and Koontz were the real standouts.

How about you? Any words that have stuck with you, whose origin in your memory is not shrouded in mystery?