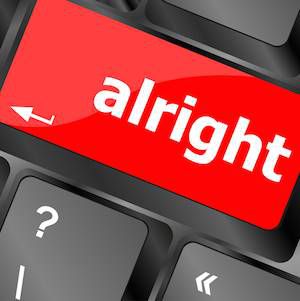 It’s time for another edition of Tasha’s pet peeves. There are some people in the world who have grammar pet peeves. That chick from Hyperbole and a Half hates “alot,” Detective Sergeant Hathaway from the TV series, Inspector Lewis, hates misplaced apostrophes, and I hate it when people misspell the phrase all right as “alright.”

It didn’t always used to be this way. I used to not care about all right and instead focused most of my energies on then/than mixups. But then (or than? no) I wrote an article on common English spelling mistakes, after which I started noticing all right misspellings a lot more. Particularly in self-published novels. And when I would casually mention that this was wrong, alllllll these people would crawl out of the woodwork like something from a Hitchcock film (“Slow down, crazy, there was never a Miss Froy on the train…”) and insist that alright was, in fact, a word. And THAT was when I started to get annoyed.

I’m not a grammar nazi (really, I’m not), but “alright” versus all right is pretty basic stuff, people. And don’t even bother linking to some online dictionary that has “alright” in it, or quoting common usage at me, because I really don’t give a crap. Just because a word is in the dictionary doesn’t mean it’s a word. Seriously. There’s even a term for words-in-the-dictionary-that-aren’t-words (of course there is): ghost words. It happens a lot more often than you would think. One of the most famous examples is “dord,” a word without etymology that appeared in Merriam’s dictionary for five years before someone caught it and was like, “Hey… that’s not a word.” But by that time several other dictionaries had already included it, because copycats. That doesn’t make “dord” a word.

But Tasha, you might be saying now, altogether and already have been used for centuries and are considered words! Um, yeah, you do realize altogether and already have their own meanings separate from all together and all ready, right? Like if you use already when you mean all ready, you’re wrong. They’re not misspellings of those phrases that eventually came to be accepted as meaning the same thing, they’re their own words. Merriam-Webster might have “alright,” in it, but the definition of “alright” is “all right.” I.e., it’s a misspelling of a phrase. IT DOESN’T HAVE ITS OWN DEFINITION.

If you want to go the common usage angle, fine. But at least make it delightfully colloquial like, “Awrigh’,” or “Aiiight.” Even the dictionaries and grammar experts that mention “alright” as part of common usage say that all right is the *correct* spelling. Don’t make a COMMON MISTAKE and then call it common usage. That’s bullshit. Selfie is common usage. It’s its own word. “Alright” is a misspelling of a phrase that’s commonly used. Most Americans spell Albuquerque, “Abaquerque,” so why don’t we just change that? Sorry, New Mexico, make your city names easier to spell next time! Many people also misspell “a lot” as “alot,” and I don’t see anyone trying to argue me down from insisting alot isn’t a word.

It’s gotten to the point where I’m willing to give a self-published novel kudos if it has all right instead of “alright,” because then at least I know that whoever copy edited the book, whether it was the author or a professional editor, knew what they were doing. Of course, I’ve come across “alright” in traditionally published novels, too, but it’s by far more prevalent in self-published novels. Whenever I see it, I can hear a whistling sound as my opinion of the book plummets.

Is it silly to judge the quality of the editing of an entire book based on one “word?” Yes. Almost as silly as the fact that I have to defend my refusal to accept a word that isn’t a word as a word in a book I paid money for. That’s just not all right.