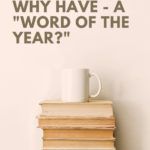 Think about the last time you felt good. Maybe you wrote a tweet about it. Because awesome.

Was it a bad day? Did someone important unfriend you? Perhaps work was a total dumpster fire.

Ahh, those handy Words of the Year, helping you describe your life since 1990. It’s become a celebrated annual tradition, part of our collective summing up of another year gone by. But it’s also an important bellwether of cultural change.

“It’s a reflection of how language is encompassing the zeitgeist of the times,” said Ben Zimmer, chair of the New Words Committee of the American Dialect Society and a language columnist for The Wall Street Journal. “We’re looking for those things that reflect our preoccupations, our national discourse, and what’s on our minds.”

How Word of the Year Began

Word of the Year (WOTY) started in the States when the American Dialect Society’s then-chair Allan Metcalf wanted to drum up publicity for the organization, Zimmer said.

Metcalf modeled WOTY after Time’s Person of the Year, and the idea took off. Other organizations have since created their own WOTY traditions, including Merriam-Webster and the Oxford English Dictionary.

While each organization takes a different approach to selecting the words or phrases — or even parts of words — none require that a word be new or never seen before.

For Merriam-Webster, the winner and its runner-up are chosen based on an analysis of words from their online dictionary.

“For consideration, the words must be looked up in extremely high numbers while also showing a significant year over year increase in traffic,” said Peter Sokolowski, Editor at Large for Merriam-Webster. “The Words of the Year shed light on topics and ideas that sparked people’s interest throughout the course of the year.”

At Oxford English Dictionary (OED), candidates are chosen from their language research program, including the “Oxford Corpus,” which gathers around 150 million words from web-based publications each month. Lexicographers use the data to identify new and emerging words and examine how they are used.

Suddenly, new words and usages were popping up in remarkable numbers. In fact, 2020 was such an unusual year that the OED decided to forgo choosing a single Word of the Year.

Rather, they focused on themes and wrote about various words relating to those themes.

Of course, one major theme was the pandemic. The OED analyzed terms like lockdown, social distancing, and superspreader. But they also looked at political and environmental terms, such as anthropause, the global slowdown of human activities, or acquittal, after President Trump’s first impeachment trial. BIPOC, an acronym for Black, Indigenous, and people of color, was another term identified.

“In 2020, it was immediately clear that pandemic was our word,” said Emily Brewster, Senior Editor with Merriam-Webster. “Lookups of the word first spiked in February, and interest in the word was high throughout the remainder of the year.”

At the American Dialect Society, the WOTY process was different for 2020. Normally, the society meets in-person to debate and choose a winner. This year, due to the pandemic, they held a virtual event, inviting members of the public to nominate words before voting on a winner.

(The event was live-streamed and is still available for interested wordsmiths out there.)

“Anyone is welcome to join,” Zimmer said. You don’t have to be a member of the society. “We had a lot of great participation,” he said.

In fact, one of the things Zimmer has appreciated about the event is the inclusivity. When it started, they were a much smaller group of established scholars.

“Now we get all sorts of contributions from a diverse array of people,” Zimmer said. “We’re trying our best to accurately reflect the national conversation.”

Going into 2020, Zimmer would have guessed the words they’d be thinking about would be related to the presidential election. For example, red states, blue states was a previous election-year winner.

“Of course, this year was unprecedented, which was another word that got nominated,” Zimmer said.

But COVID-19 dominated the national discourse.

After the World Health Organization dubbed COVID-19, the word quickly became clipped and used in all sorts of phrases like “Covid baking,” “Covid hair,” and “covidiot,” Zimmer said.

“It has become a stand-in for the entire pandemic and the societal impacts that we’ll be experiencing for years to come,” he said.

While it’s too early to know which cultural shifts will dominate 2021, the pandemic is still heavily influencing the language. Zimmer wrote about the term long-hauler for long-term COVID sufferers, and McPherson noted word trends for vaccinations and variants.

Whatever ends up happening in 2021, the WOTY will continue its tradition of marking cultural change — a tradition that isn’t without its occasional grammatical controversies.

For example, in 2020, irregardless was a Merriam-Webster runner-up.

“Its lookups [were] fueled by a collective outrage about the word’s very existence,” Brewster said. “Twitter was awash in people bemoaning that we’d added it to our dictionary.”

But Brewster pointed out that the word has been in their dictionary since 1934. She added she would have been grateful if irregardless had been the worst of what 2020 had to offer.

Another notable past winner is the nonbinary pronoun they. Both Merriam-Webster and the American Dialect Society marked its new usage as an important cultural shift.

In 2019, Merriam-Webster chose they as their WOTY, saying that: “It reflects a surprising fact: even a basic term, among the most common in the language — a personal pronoun — can rise to the top of our data.”

Merriam-Webster added: “There’s no doubt that its use is established in the English language, which is why it was added to the Merriam-Webster.com dictionary this past September [of 2019].”

The American Dialect Society recognized they with Word of the Year in 2015 and Word of the Decade in 2019.

“When a basic part of speech like the pronoun becomes a vital indicator of social trends, linguists pay attention,” Zimmer said.

Runner-ups for Word of the Decade included selfie, #BlackLivesMatter, and #MeToo.

Jesse De Witt, Executive Director of Digital Product Management for Merriam-Webster, said that while Word of the Year gives us that macro perspective on a year’s data, there are ways to find out what’s happening now. On Merriam-Webster’s homepage, you can see top words in real time, refreshed every 30 seconds.

“You will find that some words are looked up all the time, regardless of what’s in the news, whereas other words are clearly triggered by events,” De Witt said.

Zimmer noted that while Word of the Year selections are fun, they are often only the beginning of a word’s analysis.

“After the fact, we take some time; we write up more scholarly treatments of these words,” he said. “We try to find out what’s the earliest usage and see how it’s developed. Very often things seem new, [but] it has a hidden history.”

Zimmer said it’s important work to do. Sometimes there are issues of cultural appropriation, or terms that might originate in African American language.

And, right now, you can read some that research for free on American Speech, a journal published by Duke University Press.

“We do try to dig deeper and give a fuller appreciation,” he said.

Can’t get enough WOTY? Read these Books for Young People Inspired by the Words of the Year.