I mean, I thought it was coming out this fall. And everyone I know who is as excited as me for this movie was just as surprised to learn it hits theaters in a month. To compare with other blockbuster comic movies: Even if I had no interest in Guardians of the Galaxy Vol 2 (I love Guardians!) I would still know ALL about it– especially, since Chris Pratt’s face seems to be everywhere; I still haven’t gotten around to watching Suicide Squad but I feel like I did watch it because of all the promotion. I don’t know what’s really happening in regards to Wonder Woman’s marketing–there are plenty of posts, arguments, and theories popping up, including that it’s coming after the premiere of Guardians 2–but I do know that I want to see Wonder Woman and Gal Gadot on everything. Everything!

So much so that I asked fellow Rioters to help with great marketing ideas: 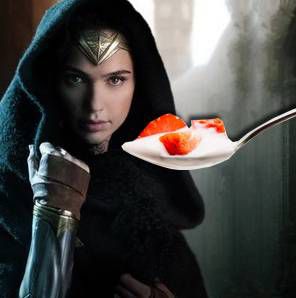 Wonder Woman + Fage Greek Yogurt: I can see it now—“Back on Themyscira, Diana ate a delicious Mediterranean diet of olives, feta, and, of course, Greek yogurt. Now that she’s in Man’s World, nothing reminds her of home so much as a tasty cup of Fage yogurt mixed with honey.” Seriously, how is this not already a marketing campaign? — Charles Paul Hoffman

Wonder Woman + independent  bookstores – This was actually referenced in the webcomic Love and Capes where the Wonder Woman stand-in, Amazonia, starts touring independent bookstores to support their business. Diana would totally do this, and bookstores would be more likely to host a princess that believes in ending war over hydra agents. —Priya Sridhar

Wonder Woman + Tampax: Clearly, Wonder Woman doesn’t let “that time of the month” slow her down. Tampax needs to get on this, stat. —Jaime Herndon

Wonder Woman + Aflac: Baby Groot is chumming it up with the Geico Gecko for Marvel so obviously DC needs to go to the Gecko’s rival and team-up Wonder Woman with the Aflac Duck. I mean it’s only natural that the Aflac Duck would be squawking Aflac at everyone injured during a superhero battle.

In real advertising world I’m really excited for Danica Patrick’s Wonder Woman car and hope there is more of this to come! What advertisement or promotion would you like to see starring Wonder Woman?