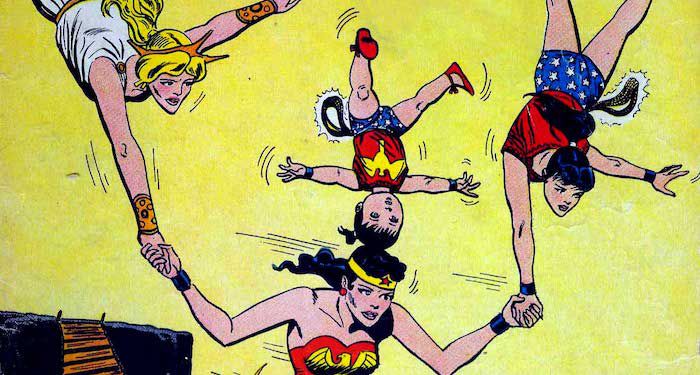 Wonder Woman is one of DC Comics’ most iconic characters, but she didn’t start out that way. She debuted in the pages of Sensation Comics, published by All-American Comics. DC bought out All-American in the mid-1940s, giving them ownership of what would become the world’s best-known female superhero.

But by the early 1960s, DC seems to have grown bored with Wonder Woman. Apparently, there are only so many stories you can tell about a super-strong woman from a mythical island filled with female warriors and fantastical inventions before you have to start resorting to gimmicks. A lot of cover art from this period features Wonder Woman’s early adventures as the teenage Wonder Girl and the toddler Wonder Tot. What you will not see, however, is Wonder Woman or her various iterations fighting much crime. Instead, they are mostly focused on fighting vicious animals or evil versions of themselves. That’s understandable for the younger ones, who haven’t left for Man’s World yet, but you’d think Wonder Woman could find an actual crook once in a while instead of spending all her free time rescuing Steve Trevor from faulty aircraft.

And then, in Wonder Woman #124, we got the most gimmicky gimmick of all.

Knowing what I do about Silver Age comics, I assumed the explanation for this would be a fabulous Amazonian invention that allowed Wonder Woman’s younger selves to travel to the future, or a natural calamity that somehow threw Wondy and her mother into the past. The real explanation is disappointingly pedestrian.

At the request of the fans (whether real fans or in-universe fans is not made clear), Wonder Woman and her mother take hours out of their lives to splice and dub an entire movie featuring fictional team-ups between Wonder Woman, Wonder Girl, Wonder Tot, and Queen Hippolyta, who they nonsensically insist on referring to as “Wonder Queen.” (I like to imagine that everything on Paradise Island has been rebranded to promote the hometown hero.)

As off-the-wall as the Impossible Tales are, they somehow also manage to be boring, at least if you read them all in a row the way I did. There is remarkably little variety among these stories. For example, they all seem to pull from the same limited pool of plot elements, including…

The very first villain faced by the Amazon quartet is Multiple Man, a shapeshifter created during a nuclear explosion not far from Paradise Island. (You’d think Hippolyta would be upset about men endangering her island with nuclear fallout, but nah.)

Multiple Man is basically unbeatable: any time the Amazons manage to melt, evaporate, dissolve, crush, or otherwise get rid of him, he reconstitutes himself. Fortunately for us, he doesn’t actually exist, as he never appeared outside of these cobbled-together home movies.

When they’re not battling Multiple Man, Wondy and company are usually participating in a contest on Paradise Island. Sometimes, the prize is the chance to be queen for a day. But in Wonder Woman #138, they compete for, um, a giant kite.

In Wonder Woman #142, they went looking for rare insects for the island museum. In the spirit of irony, they ended up in a “mirage world” populated by chalk-white, giant versions of themselves who viewed them as insects to be captured and studied. The giants never say a single word. It is actually pretty horrifying.

Since this whole film-making exercise started out as a favor to Wonder Woman fans, it makes a strange kind of sense to bring actual (fictional) fans into the narrative. Twice, Wondy selected a young fan to come hang out with her and the other Wonders on Paradise Island. Needless to say, things went wrong real fast for little Alice and little Carol Sue.

His younger selves, who also appear throughout, are Mer-boy and Mer-mite. I don’t want to pick on a toddler, and I won’t, but only because I can’t decide whether to derisively compare him to termites or Marmite.

I don’t know why, but the Impossible Tales always take our Amazons underwater, and those Amazons always end up on the wrong side of the local fauna, usually a giant clam. Maybe the writer had a bad oyster one time.

These panels are from Wonder Woman #140 and feature Wonder Tot saving her genie friend from a swordfish. Did I not mention that Wonder Tot had a genie friend? His name is Mister Genie.

Eventually, the Impossible Tales dropped the exposition at the beginning of each issue about how this is an Amazon film production. In fact, in the last one, Wonder Woman #145, they refer to Woman, Girl, and Tot as “sisters,” and I’m not sure if they meant metaphorically or if someone was starting to get confused about who all these people were. Mix-ups like this would lead to the endless nightmare that is Wonder Girl’s origin story.

Despite everything I just said, I think I’m underselling just how bananas these comics are. There’s one story where all of the Wonders have the same dream except for Wonder Woman, and all the others get mad at her because now they won’t know how their dream ends. It’s bizarre, but not as bizarre as the fact that their dreams somehow affected some people from the future, who capture the entire family and threaten to put them in a zoo if they don’t capture a dinosaur for them.

Eat your heart out, Patty Jenkins.