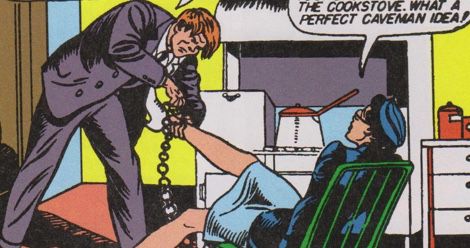 If you are unfamiliar with Wonder Woman’s earliest adventures, let me be the first to inform you that they are bananapants. Not only are the plots themselves flat-out bananas—“Let’s tell a story from the point of view of a pine tree that helps Wonder Woman defeat Nazis in Canada and reunite a woman with her abusive dick of a husband!”—but the morals are often…head-scratching. (See the aforementioned reunion between woman and abusive dick.)

One particular story from Wonder Woman #1, published in 1942, is the epitome of everything wrong with Golden Age Wonder Woman. It starts from the second that Wondy and her friend/sidekick, Etta Candy, head off to Texas on a train with a caricature of a black person. 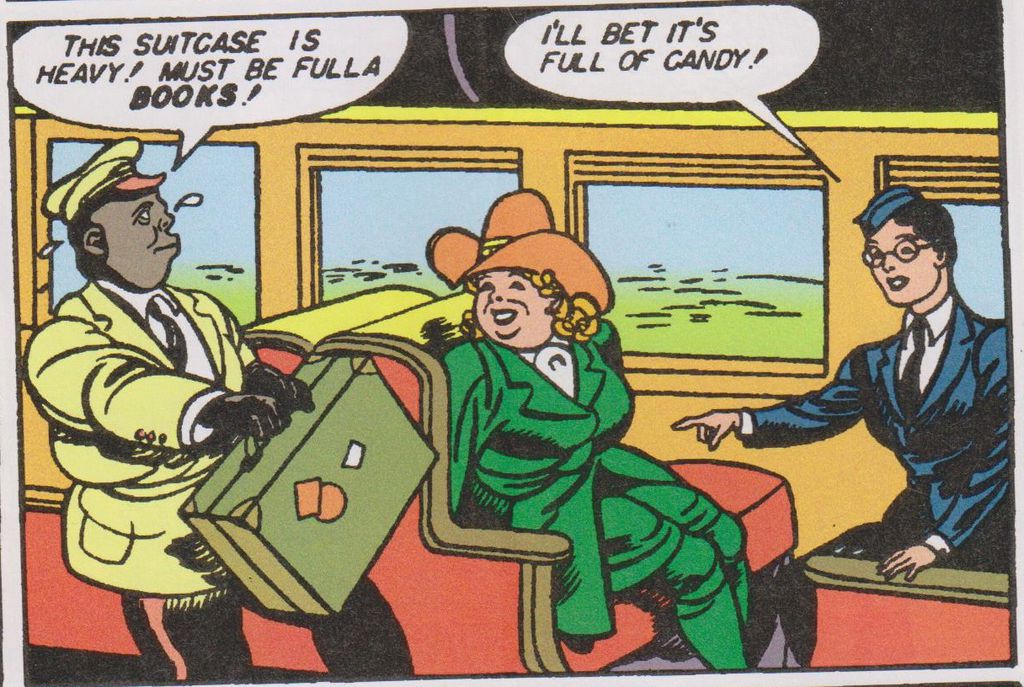 This is the recolored version of this page. I’ll leave it to you to imagine what the original looks like. (Hint: it is not better.)

Before we have time to recover from that nonsense, they throw us into the weirdest fatphobic dialogue I have ever clapped eyes on. 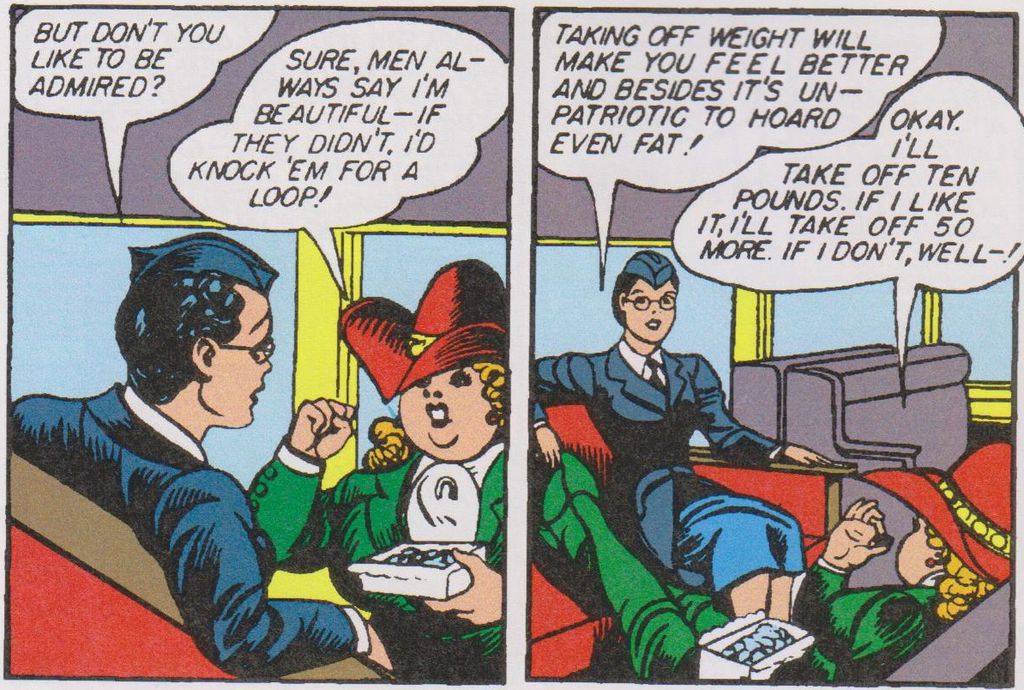 The heck does that even mean, Diana? Fortunately, this issue ends with Etta telling Diana she doesn’t like dieting and demanding her candy back.

Oh, but the fun doesn’t stop there. Plot stuff happens, and our heroines (?) encounter a couple of Axis agents in the form of two Mexicans: Pancho, a phony ranch hand, and Pepita, your standard issue Spicy Latina.

As a Mexican American, I, too, lure unsuspecting men to their doom with tainted cigarettes and a poorly written accent.

(The dude there is Etta’s brother, Mint. He’s kind of a knucklehead, so if you want to add “dumb country hick/hillbilly stereotype” to the list of this comic’s sins, you’d be well within your rights.)

Pepita is (reluctantly) working under some Japanese spies, none of whom I am going to show you because it is so, so bad. There’s also some racist wordplay in here, which I am also not going to show you, but I posted it on my Tumblr, if you have the stomach to click through.

And finally, just in case you weren’t offended by all the cruelty to humans, we get some cruelty to animals! Didn’t I mention? Pepita is an expert bullfighter. 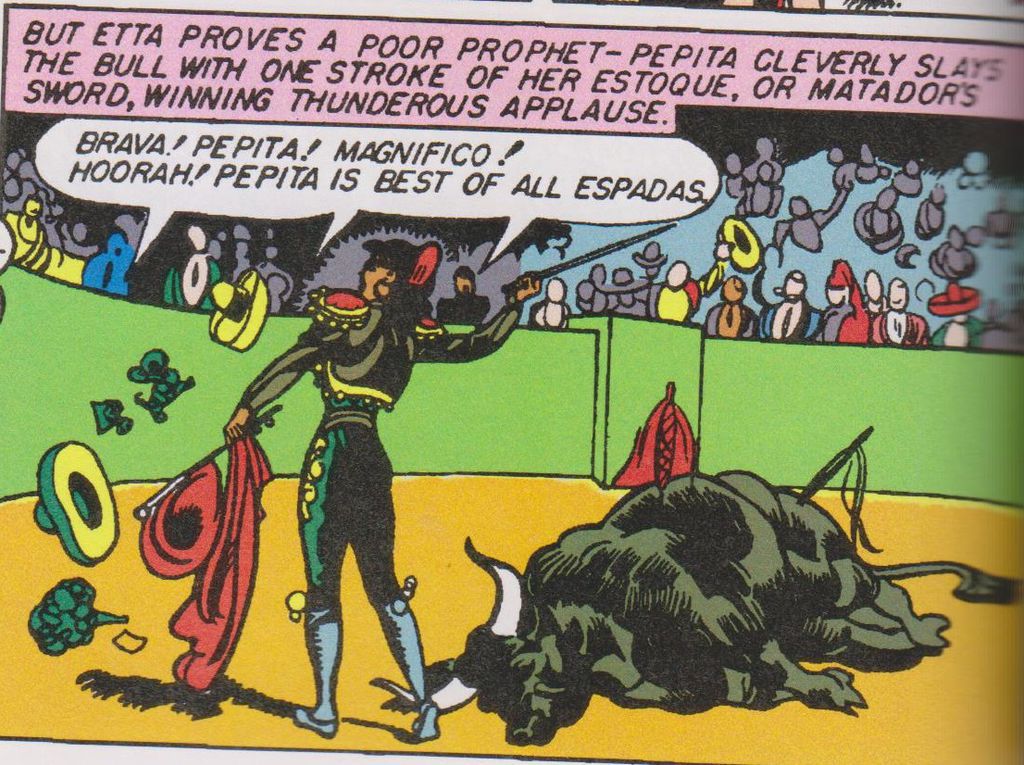 It’s like this comic was trying to hit all the squares on a-hole bingo. Good grief.

But again, the problems exemplified in this issue were not isolated cases. Anti-Japanese sentiment in particular was rife throughout Wonder Woman’s earliest adventures. And characters both good and evil felt the need to poke fun at Etta’s weight on a regular basis.

For all that Wonder Woman has been lauded as the first great superheroine—a woman who could kick just as much ass as any of her male counterparts—there are some remarkably un-progressive, un-feminist ideas in here. For instance, women working with the Nazis are never truly guilty: they have invariably been forced to serve such vile masters (except for that one time the woman turned out to be a male Japanese spy in disguise). That includes everyone from Pepita to Baroness von Gunther, who was Wondy’s first recurring supervillain…until we find out the Baroness was only working for the Third Reich because they were holding her daughter captive.

And reuniting a woman with her husband is always seen as a happy ending, no matter what. Wonder Woman comments that she is jealous of the wife in Sensation Comics #9, even though her husband had previously chained her to the stove to prevent her from getting a job. 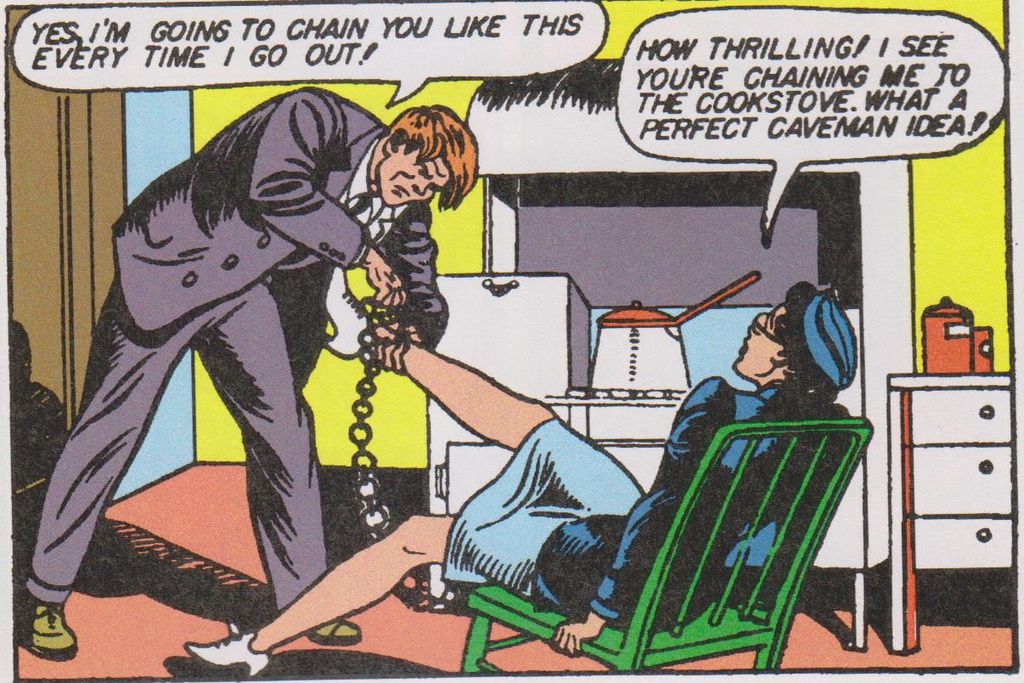 1. That’s Wonder Woman in disguise, not his actual wife. Not that it helps.

2. Who has chains just lying around the house? Does…does he chain her up often???

The story ends with the husband making a fortune manufacturing a new weapon, so his wife doesn’t need a job after all. PROBLEM SOLVED.

I imagine it’s quite jarring for modern readers, who often think of Wonder Woman as a feminist icon, to be reminded that she was created by a flawed man in a flawed, thankfully bygone era. It certainly threw me for a loop, and I already knew about half this comic’s questionable content before diving in.

But if you’re willing to wade through those flaws—and make no mistake: they are numerous—then Wonder Woman’s early adventures are entertaining, ridiculous, and entertainingly ridiculous. You’ll get giant space kangaroos, Martian field trips via astral projection, and a heaping helping of Diana’s heckin’ stylish culottes. Plus it’s fun to see where the Amazing Amazon started out, and to remember how far she’s come.

All of the comics discussed here can be found in Wonder Woman: The Golden Age Volume 1.