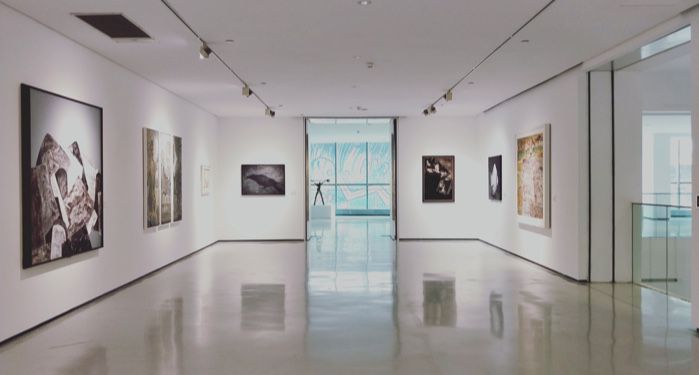 This post contains affiliate links. When you buy through these links, Book Riot may earn a commission.
Sourcebooks.

In the 100 years since the suffragist cause gave white American women the right to vote, many museums have gathered the visual history of the movement. In honor of women’s suffrage, I have curated a list of several museum exhibitions celebrating the fight for the 19th amendment. Some of these exhibits have since closed, but as we all know, the internet is forever. In this case, it allows us to visit exhibitions we would never have access to otherwise. And once you’ve perused the exhibits, I’ve provided enough links to exhibition catalogues, museum bookshops, and related texts to see you through until the 19th amendment’s bicentennial.

In 2013, the Smithsonian Museum held an exhibit that explored the 100th anniversary of the National Woman Suffrage Parade, held on March 3, 1913—the day before President Wilson’s inauguration. This banner was part of an “artifact wall” in the National Museum of American History’s Behring Center. Originally, banners such as this one were attached to wagons and rolled in marches and parades along with suffragists, who carried smaller versions with similar demands and sentiments.

The Behring Center currently has another exhibition called Creating Icons: How We Remember Women’s Suffrage that takes a deeper dive into the suffrage movement, discussing how the iconography of the movement was deliberately created. For example, immediately after the signing of the 19th amendment, the Smithsonian was approached by the National American Woman Suffrage Association (NAWSA) with memorabilia from Susan B. Anthony, and the resulting display solidified Anthony’s place in American cultural history. The online exhibit further discusses how this legacy is problematic and leaves out women of color, particularly Black and Native American women.

If you’re looking for more on this, the “Education” page of the exhibit reveals the Objects of History: Women Suffrage video series. For reading, Fighting Chance: The Struggle over Woman Suffrage and Black Suffrage in Reconstruction America by Faye E. Dudden takes a deep dive into why the women’s suffrage and the abolitionist movement split, and offers some insight into the complexities of what “equal rights” truly means.

This slideshow from the National Women’s History Museum discusses how creating a female political culture was critical to the success of the women’s suffrage movement. There is an accompanying middle-grade book in their online shop called Women & Suffrage: Crusading for the Vote.

The National Women’s History Museum also has an entire website dedicated to the Crusade for the Vote. The “Explore Primary Sources” section is a book and history lover’s dream, full of scans of original documents and photos.

The National Archives put together an exhibit called Rightfully Hers: American Women and the Vote, which includes the actual signed 19th amendment document. It’s not quite as impressive online as I imagine it would be in person, but it still gives me goose prickles. Along those same lines, the Library of Congress’s website has primary sources for days. Make sure you have some time available and a cup of your favorite liquid to sip before you click that LoC link! It’s a delightful rabbit hole.

Not to be outdone, the National Portrait Gallery held an exhibit of Votes for Women: A Portrait of Persistence that closed in January 2020. Select images from the exhibit are available at the above link, and the exhibition catalogue is still available.

Google Arts & Culture has a fully online exhibit based on the book Women’s Suffrage Memorabilia: An Illustrated Historical Study. There is an impressive array of memorabilia pictured; I’ve put a general hold on buying art exhibition books, but I made an exception for this one.

The Oregon Historical Society has put together an informative online exhibit called Nevertheless, They Persisted: Women’s Voting Rights and the 19th Amendment, which follows the work of Oregonian women in realizing their voting rights. The OHS shop has 25 diverse titles available under the same heading. They also provide a link to the Women & the American Story site, affiliated with the New-York Historical Society. The WAMS site offers a full curriculum to “students, educators, and the curious individual” about exactly what it says on the erstwhile box.

In the excellent Arts & Crafts movement exhibition Maker & Muse: Women and Early 20th Century Art Jewelry, currently on virtual display at the Frick Pittsburgh, The Richard H. Dreihaus Museum of Chicago showcases dozens of beautiful pieces from the early 20th century, several of which are made intentionally in colors associated with suffrage. The catalogue to this exhibition is stunning, and you can find it here.

The fight for women’s suffrage is complicated and difficult. These exhibits remind us that in many ways, we are still fighting: in many places with Native American reservations, houses do not have street addresses, so the First Peoples of the Americas cannot even register to vote. The unhoused have similar challenges in many states. People with felony records still cannot vote even after their time has been served. Every one of these issues affects women’s suffrage and is happening right now. Never forget that voter suppression did not stop when “everyone” gained voting rights. If we in 2020 believe that we would have marched with the suffragists of 1920, then we must continue their legacy and work to expand voting rights to every American, everywhere.

Author’s Note: I dedicate this article and all of my political activism to my Great Aunt Mary, who marched as a suffragist in the early 1900s and as an equal and civil rights advocate throughout her life.