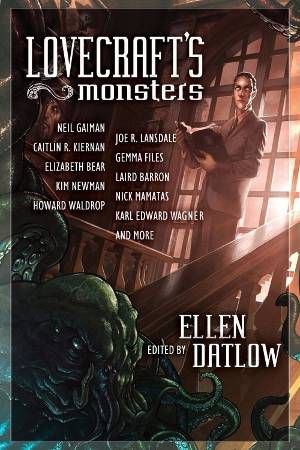 February was Women in Horror Month, and the first person I thought of when I heard this was Ellen Datlow (of course).

Ellen is an award-winning editor of numerous anthologies of horror and dark fantasy that anyone writing or reading in the fields as heard of. I recommend checking out any of the Best Horror of the Year anthologies, Haunted, or her latest, Lovecraft’s Monsters, which is out soon). What you need to know is this: she reads for a living.

I tracked her down and asked her a few questions about women in horror, short stories, and her favorite books. Enjoy.

1. First off, the most important question: am I right in assuming that you read short stories for a living? And furthermore, that if you don’t like what you are reading, you just call up writers like Neil Gaiman or Lucius Shephard or Kelly Link and make them write you one (something you call “commissioning”)?

ED: Yes! I jokingly call myself an endangered species: a short story editor who is paid for her work. If only it were that easy. Alas, it’s difficult to get new stories out of Neil or Kelly (although I have acquired a story by Kelly for Tor.com, which will be published March 12th. And Lucius has had health problems in the last year.)

In any case, I beg/push, cajole, and nag the writers I love to send me work, if they don’t automatically do so.  (I may suggest they take a break from their novel and write me a story –heh-their novel editors hate me).

2. You are an anthologizer of horror and dark fantasy short stories. What books turned you towards these genres at first, and what books, if any, do you consider “defining” for these genres?

ED: The books that turned me toward the dark side are some of the same that I feel define horror and dark fantastic for me: The Playboy Book of Horror and the Supernatural, the works of Lovecraft and Edgar Allan Poe, the short stories and novellas of Flannery O’Connor, the novels of Shirley Jackson, Richard Matheson’s Shock and Shock II, Dangerous Visions (which has a lot of sf/horror in it). There are so many other books of short stories that define the genre: The anthology edited by Kirby McAuley, Dark Forces, The Books of Blood by Clive Barker.

3. What books are you reading now, and how did you come to choose those books?

ED: I’ve recently finished N0S4A2 by Joe Hill, which I’m really impressed by. I only read books that I can justify reading for the Best Horror of the Year and have just finished my summary of 2013 and now I’m burned out. I probably won’t start reading for 2014 for another few weeks.  I’m currently reading Gun Machine by Warren Ellis, and enjoying it. (I only read one novel at a time, something I carry with me while doing errands and riding buses around town).

4. February is Women in Horror Month. Can you recommend three recent horror books by women you think Book Riot readers should take a look at?

5. When it comes to horror, people tend to read Stephen King and little else. What other authors should King fans be reading?

ED: There are so many good writers out there. I am of course more interested in short fiction than novels (and as I mentioned above, I don’t have time to read many novels). But Laird Barron, John Langan, Nathan Ballingrud all had brilliant collections out in 2013. They’re not like King at all so I don’t know if his fans would enjoy their work. Paul Cornell’s writing a series of novels (London Falling was just dandy), Richard Kadrey’s Sandman Slim series is a lot of fun, Joe Hill’s doing really interesting work that his father’s fans might enjoy. Caitlin R. Kiernan’s novels are brilliant (but not like King at all).  I’m just going to push some of the writers whose work I enjoy personally … Gemma Files, Margo Lanagan, Kaaron Warren (a Canadian and two Aussies), Gary McMahon, Stephen Volk, Simon Bestwick, Conrad Williams, the late Joel Lane (these last five are Brits).

6. You recently posted the table of contents for your annual Best of Horror anthology. What I noticed there are the various magazines you are picking stories from. Which magazines get your highest recommendation? Do you think genre short story magazines are going to die out anytime soon?

ED: Black Static was hot last year with five of the stories chosen from it. F&SF has a lot more horror than most horror readers think. Nightmare is getting stronger. There have always been magazines and websites that publish a mix of genres: Interzone, Apex, Aurealis (Australian), Albedo One (Irish), the oddball Innsmouth Free Press (Lovecraftian), the Journal of Unlikely Entomology (insects and other creepy crawlies). Subterranean (which unfortunately  is discontinuing its online magazine), Tor.com (I’ve been acquiring a lot of dark fantasy and horror for it, with horror, sf/horror, and dark fantasy stories by Stephen Graham Jones Anna Tambour, Veronica Schanoes, Bruce McAllister, Dale Bailey, Genevieve Valentine, and Nicola Griffith forthcoming).

They all have something interesting for readers. Genre short story magazines and webzines are going nowhere. Some fall by the wayside, others come up to take their place.

7. You say in your introduction to the forthcoming Lovecraft anthology Lovecraft’s Monsters that Lovecraft stays in so many writer’s imaginations due to the richness of his mythos. Do you see any recent writers creating worlds that will be written about like his years to come?

ED: As I only read horror novels and concentrate on horror short fiction, that’s the only genre for which I can respond. The short answer is no. There are plenty of contemporary writers influenced by earlier writers (H.P. Lovecraft and Sir Arthur Conan Doyle most prominently). Many of the resulting stories are boring pastiches, bringing nothing new to the original characters or worlds they inhabit. A few talented, ambitious writers build on the originals, creating fresh and interesting work. Which in turn may become playgrounds for other writers.

Thomas Ligotti is a good example of someone influenced positively by Lovecraft and other weird writers—the Grimscribe’s Puppets anthology commissioned writers to use Ligotti’s world as a playground for their own interpretations and some very good work came out of this.  But will there be other writers mining Ligotti’s work? I doubt it. Ligotti is a wonderful writer and I love his work, but his “world” isn’t as varied as Lovecraft’s. If he continues to write fiction he might expand his universe but unless he does we have what we have. Also, he’s unknown outside of a small band of aficionados of his work.

Laird Barron could be creating an Alaskan mythos of his own but will it catch on with other writers? It’s not an imaginary land, it’s a real one in which he gives his imagination full play, which is very different from Lovecraft. I think Lovecraft’s worlds are less grounded in actuality, but in his neuroses.

I’ve never been comfortable predicting trends in fiction – I know nothing more than any other educated reader.