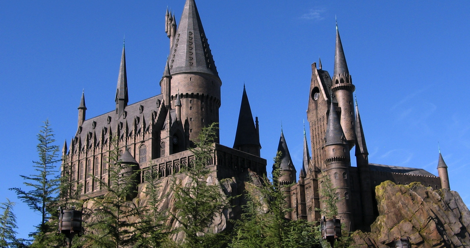 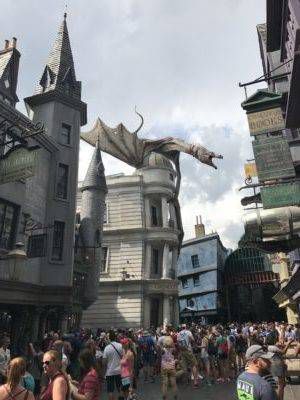 “There’s Grimmauld Place!” I shouted, my right fist involuntarily raised in the air. I had just caught a glimpse of the block-long London street facade which hides Diagon Alley from muggle view at Universal Studios in Orlando. The triple-decker Knight Bus (complete with conductor Stan Shunpike) sits on the street outside, across from which an unmarked brick passageway leads visitors into a painstakingly detailed recreation of the Wizarding World’s most well-known street.

I was excited to visit the park while on vacation recently, though I didn’t realize just how excited until I laid eyes on the place. Anyone who knows me well might have been convinced I’d been abducted by aliens and replaced with an unconvincing, cheerier replica of my normal self. I had a bounce in my step and a smile on my face. This wasn’t evidence of a drastic personality change, I swear; it’s just that I really, really love the Potter books.

I’ve loved them, like so many, since I first read them over a decade-and-a-half ago, in large part due to the acute sense of place that they evoke. Half the joy of starting a new Potter story was the cozy feeling of re-entering the Wizarding World, snuggling up by the fire in the Gryffindor common room, tucking into a meal in the great hall, and navigating Diagon Alley. It’s one reason why I think so many people re-read the series so frequently, and it’s absolutely why the theme park works so perfectly. To step into Gringotts or Knockturn Alley or Ollivander’s is to feel, if you’ll indulge yourself, connected more fully with a fictional place than you might imagine possible.

It helps, I’ll add, to have an eight year-old in tow.

If said eight year-old (A) loves the Potter books as only someone reading them for the first time can, (B) is prone to earnest belief in fantasy worlds, and (C) responds with open-mouthed awe as each new element of the Wizarding World is revealed to him, all the better.

My son checks all three boxes, and his sense of wonder was contagious. Just having him there as we took sips of butterbeer and watched the dragon atop Gringotts spew fire doubled my enjoyment.

But not everyone got into the spirit. Early in the day (right after we’d been to Ollivander’s and procured the day’s first butterbeers, naturally), we got in line for the “Escape from Gringotts” ride, the line for which is its own sort of experience. First, you walk through the lobby of the bank, past bespectacled Goblins going about their business. Then, you witness a scene between Bill Weasley and a bank employee before stepping onto an elevator that leads you down into the area where the ride itself await. It’s all expertly crafted.

But on the elevator, I noticed a couple of teenaged guys goofing around. Unlike most of the folks in line, they didn’t seem particularly interested in their intricately constructed surroundings. In fact, it was soon clear that they were mocking a lot of what they saw, laughing at the oohs and aahs being drawn from many of our fellow passengers, making a point to be unimpressed.

It’s possible that these antics were just a byproduct of their age and circumstances. A lot of people go through a period during which they feel compelled to project a kind of cool, ironic detachment from nearly anything (especially in public), lest they be accused of caring earnestly about something (the horror!). In any case, they were unquestionably the exception on a day when nearly everyone we laid eyes on was giving themselves over fully to the moment.

But still, I couldn’t shake the impression that those kids left on me. It wasn’t them, specifically, and it wasn’t that they didn’t seem to care that much for something I care for very deeply. Tastes vary. No biggie. But their attitudes reminded me of those people who went out of their ways to spoil the endings of the books while eager fans waited in midnight bookstore lines, people who think that getting swept up in something fictional (or, at least, a different fictional thing than they enjoy) is stupid and worthy of scorn.

Perhaps it irritates me so much because I was at a place that is designed, from stem to stern, as a full-bodied embrace of the Potter fandom.* And I can’t tell you how intoxicated that embrace made me feel. To be surrounded by people proudly representing their houses (including my son, the Hufflepuffiest Hufflepuff there is) was to be reminded of what it felt like to read the books for the first time, immersed completely in the Wizarding World, your thoughts and conversations filled with theories and your dearest wishes for the characters you’ve adopted as a kind of ever-present mental companions. This is hokey, but it felt like being home in the same way that re-reading the books does.

For me, it’s Potter, but people feel this way about tons of different works. In a lot of ways, that specific feeling is exactly the reason fandom is so important. I wish that everybody could have an experience akin to what I felt at The Wizarding World of Harry Potter, but more than that, I wish that everybody could understand what it feels like to love a piece of fiction like that and to let themselves get wholly invested in it.

Because once you feel that, it should impossible to look at another person’s passion and entertain mocking it, even for a moment.

*Yes, ok, it’s also designed to produce huge financial gains for a number of corporate entities that cynically capitalize (literally) upon the die-hard devotion of millions of readers. Everything is for sale. Theme parks exist to make money, and it’s impossible to ignore the sense that Universal may as well be printing the stuff. Any enjoyment of the parks hinges on being able to divorce yourself from this reality for at least the duration of your visit there. If, like Hermione Granger, you find it impossible to eat the proverbial Hogwarts feast without thinking about the Wizarding World’s cruel, greedy treatment of House Elves, then these places may not be your cup of tea.