Last month I reported on my nifty project for 2017 — reading the complete works of Shakespeare in a year. The reaction has been pretty uniform when I tell people about it: 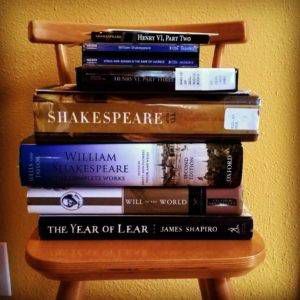 “Well. Good luck with that.”

I expected skepticism, sure. But there have been quite a few surprises, as well, and not just from other folks. Here’s what I’ve learned.

It’s not that hard. The works are entirely accessible. The last time I read Shakespeare was in high school, with that horror of a woman, my tenth grade English teacher whose name I’ve blocked out. Macbeth, back then, was opaque and tedious. Since this project lays out the reading in chronological order, we started with work that didn’t seem polished or woo-woo-genius, like we might expect when we hear “Shakespeare.” Although, I’ll be honest—the genius becomes evident pretty dang quickly. We’ve read six plays so far, currently in the thick of Richard III, and it’s been fascinating to see Will’s development as a writer.

And listening helps. I’ve been able to track down Arkangel Shakespeare recordings of nearly all the plays. Hooray for interlibrary loan! I also found audio for the two major poems. We’re reading three sonnets a week, and they’re easily found on The Googles. Alan Rickman? David Tennant? Yes, please. I read along with my eyeballs while I listen, easy-peasy. (The youngsters tell me there’s also an app for the sonnets, but my phone is too goofy for fancy shenanigans like apps.)

Another surprise? Reading with a crowd of friends and strangers is delightful. When my friend Amy roped me into this deal, I told her I could only imagine sticking with it if we had a secret Facebook group to help keep me on task. And by keep me on task I mean guilt me into not giving up. Sixty seconds later, we had our group, and our pal Drew was posting and pinning all the deets to the page. We currently have fifty-seven members, and not everyone is active, but it’s a jolly crew. So jolly, in fact, that no guilting has been necessary.

And! My friend Heather keeps us entertained by occasionally posting little synopses of the salient points in each day’s reading.

For instance, in the first bit of the poem Venus and Adonis, we learn that Venus obviously skipped the consent workshops during her Immortals University Orientation Week. Heather summed up our collective dismay rather nicely:

And have you seen the movie Titus, with Anthony Hopkins? Or read the ghastly play? Then you know it’s a kind of late medieval-early-modern version of the slasher horror film genre. (Or what I imagine a slasher film might be like, as I’m way too chicken to actually watch one.) It is gross. Supremely revolting. Imagine finishing a passage filled with rape and dismemberment, nauseous, then logging into Facebook, and reading in giant font:

“Titus: Here, Lavinia, could you just bring along my hand? In your teeth? Thanks, hon.”

Okay. Maybe you had to be there. Which, really, is the point. We’re in it together, sharing articles, videos, resources, and delight.

We might not be as loud and rowdy as I imagine Shakespeare’s original audience was, but we are a stalwart crew. Mostly we’re middle-aged, but there are at least a few youngsters, and one retired gal. And we’re mostly white and straight, but not entirely. Our goodly mix of political orientation and worldview—conservative, liberal, progressive—that’s where we’re most diverse. Coming together from our various “spaces” to do this ridiculous, wonderful project together seems a rare opportunity. And I love it.

Finally, amazingly: The ritual itself is strangely, marvelously, comforting. After November 8, I vowed to educate myself with a variety of books about race, gender, politics, etc.—the whole nine yards. And, yes, I’m making some progress on that front. So this year, this particular topsy-turvy year, seems an odd time to take on the complete works of Shakespeare.

Since the inauguration, every morning I wake with a sense of ominous foreboding, and slowly I remember. These are not normal times. And then I make my coffee and settle in for twenty minutes of Shakespeare. This daily immersion in the works conceived in the mind of a man who lived in a very foreign, long-ago century—there’s a strange comfort in knowing that avarice and ambition have always been deadly. And that conniving flim-flam men have always been with us, that the wheel of time rolls forward.

So my days are bookended with Will in the morning and, at the end of the work day, Robert Reich’s nightly resistance report, which reminds me that avarice and ambition don’t always have to be deadly. And I try to fill the hours between with kindness and vigilant protection of our fragile democracy.