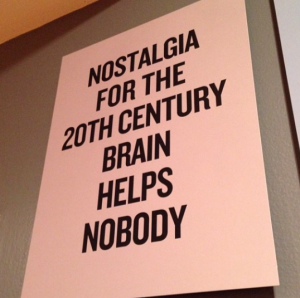 Man, it must be exhausting to be a super-serious reader in the modern age, you guys. I wouldn’t know, of course — I don’t fit the definition, as I’ve discussed on these pages before. Serious readers, though, thinkpieces in high minded places have been telling me, are Very Worried About Things. Things like Your Terrible Attention Span, and Young People, and Seriousness. I mean, the internet is a Thing, and there’s a lot of dumb people on it and when they talk about books it’s pretty stupid, and so are the people who read it. Right?

Hi, Rioters. Obviously I’m not on that train.

Will Self’s recent Guardian piece is what has me all atwitter today. It starts off pretty ok, really:

Deep, serious reading – and serious writing – is under threat from the digital revolution. It’s not that the web will make our culture more stupid, but it will lead to new forms of understanding.

This was the sub-heading, and when I read it I balked, as I always do, at the world’s-most-useless-phrase, but appreciated the nuance of the second sentence. This seems like it’s going to make an effort at balance, thought I. Jolly good. Let’s see where this goes.

Let’s think about reading – about what it’s like to read. And after we’ve thought about reading for a while, let’s consider writing – and what it means to write. There are many ways of reading: we scan, we dip, we skip and we speed through texts we know to be intrinsically dull, searching out the nuggets of information we desire as a bent-backed prospector pans for gold. In contradistinction: we are lost, abandoned, absorbed – tossed from wave to wave of language as we relapse into the wordsea. All serious readers of serious literature have had this experience: time, space, and all the workaday contingencies of their identity – sex, age, class, heritage – are forgotten; the mind cleaves to the page, matching it point-for-point; the mind is the text, and in the act of reading it is you who are revealed to the impersonal writer, quite as much as her imaginings and inventions are rendered unto you.

I… ok. Yes. I mean, that’s why we love reading, certainly. But is that really an experience only for “serious readers of serious literature”? I have had my mind cleave to the page as I work through Chekov and Shakespeare and Munro, yes. But also when I lose myself in well-constructed fantasy or deeply evocative romance, two genres that I can’t imagine Self equating with seriousness.

In fact, let me go a step further. Isn’t this how we experience story, in any form? As I lie on the floor listening to an audiobook, am I not relapsing in a wordsea, perhaps one even more profound and immediate than the one on the page? When I stand as a groundling did and watch Henry IV unfold on the Globe Theatre stage before me, am I not lost, abandoned, and absorbed in language? Do I need the page and the text — two things essential to Self’s discussion here — for that experience?

Self goes on to compare the Gutenberg-brain experience of reading

When she experiences difficulties with a text – the meaning is obscure, the syntax confused and the allusions unknown to her – she either struggles until she comprehends, or, if she is utterly stumped, she consults another book.

with the consumption of digital text

if, indeed, it were possible to gain all the required information necessary to understand a passage simply by skimming it, and, where an obscurity is highlighted, clicking on this to follow a hypertext link.

but the embedded assumption here is that one cannot read digital text deeply, and that to consult another book was not simply the pre-internet version of the hyperlink. Self’s crafty with his language here: the analogue reader struggles and consults, the digital reader skims and clicks.

Well, as a teacher of undergraduates, I call bullshit here. The problem Self addresses isn’t medium but commitment. My students are just as capable of skimming and resisting struggle with a paper text as they are of reading and rereading a digital one. Something I find remarkable about them, especially being only ten or a dozen years younger than me, is their resistance to arbitrary assertions of difference between the modes.

Self tells us next:

There has been a lot of research on digital as against analogue reading, and the results are decidedly mixed.

and we may feel some relief at the promise of a balanced portrayal. But a few paragraphs later he says

I began this provocation by describing what I think of deep reading – the kind of reading that serious books demand, and I promised that I would also discuss writing, the kind of writing that’s intended to be read deeply. But really, there’s no point in this, because such writing depends for its existence on deep readers, and in the near future such deep readers will be in very short supply.

… which is not a reflection of the mixed nature of the research at all, is it?

The way I teach attentive reading has changed, certainly, with the advent of digital devices, but I think it’s for the better. When we work through a passage in class, students have the OED and DNB on their phones (through our college library) and many other excellent sources as they look up the origins of terms, the depth of allusions, the religious references that their secular childhoods didn’t teach them. And they do this for themselves, developing readings to challenge my own. This is a skill I didn’t develop until I had amassed a body of knowledge to draw from; they, conversely, have learned to sip from humanity’s pool of knowledge and to make that material immediately useful.

Is it the same as the way I learned to close read? No. Is it worse? Certainly not.

But I think what bothered me most about the whole piece was this paragraph:

Back when I began publishing novels, not only did the reviews in the quality press mean something – in terms of sales, yes, but also as a genuine assay of literary worth – but as a writer, you knew that there was a community of readers who paid attention to them. No longer. The rise of reading groups and online readers’ reviews represents the concomitant phenomenon to the political parties’ use of focus groups to formulate policy: literary worth is accorded to what the generality want; under such terms of endearment, what is loved is what has always been loved, and the black swan of innovation flies unseen and unheralded.

Hear that, internet book communities? You broke literature. Well done. You are not “quality press,” you do not “pay attention.” You are mere focus groups for the corporate book machine. You care only about what you want. You do not pay attention to quality, You do not understand innovation. In other words, you are too naive, too unschooled, too unsophisticated to understand what good literature is.

In other words, fuck you.

This is at the heart of what the Serious Readers fail to understand about the internet and its relationship to book culture. Lively, active, engaged debate about reading is happening here at Book Riot. It’s happening all over the web, in comments sections and Tumblr posts, it’s happening in #amreading chats on Twitter and in book clubs both on-line and off.

I don’t read New York Times book reviews, or Telegraph ones. I stopped reading them not because I am stupid, or do not wish to think deeply about books, or do not have the attention span to read a newspaper. I stopped because when the bookternet developed in full swing, it showed me that the white men the New York Times and the Telegraph told me to read were but a tiny slice of the literature out there worthy of my time and attention. The slow and often embarrassing response to a public desire for a more diverse definition of literature did more to kill newspaper book reviews than the internet did.

Lord knows it’s not just Will Self and The Guardian who are perpetuating this idea that a life of the mind is somehow incompatible with a digital life. Hazlitt Magazine this week featured some fairly pointless hand-wringing about the #amwriting hashtag. Novelists like Dave Eggers and Jonathan Franzen are making bank reifying tired expectations of how the internet will steal your soul and rot your brain. (I often wonder if either novelist has ever reflected on the once oft-believed notion that the novel as a form was desperately inferior, and would thereby steal one’s soul and rot one’s brain. Serious Readers read poetry, after all.)

Listen, I get that we’re anxious about the larger impact of this brand new technology that seems to be eating our lives. But I’d far rather see writers with the talents of Self and Eggers and Franzen show us a way forward, rather than miring in the fear and anxiety that sells page clicks. And if you’re worried about the lack of role for a literary gatekeepers, maybe you should look to the limited menu they’ve been offering from for generations, and ask why an increasingly diverse population should give a whit about the limited perspectives of the reviewers housed therein.

Maybe this is why the authors who recognize that I can have my humanity and my Twitter account — Douglas Coupland is top-of-mind for me, but there are many — speak to me far more than think pieces like this ever will. I want to celebrate the possibilities of the world I live in, not mire myself in elegies about a world that once was.

As Coupland said, “Nostalgia for the 20th century brain helps nobody.”

And if you read all 1600 words of this, even though you are but a very silly person on the internet, thank you very much.