Ann-Marie Cahill will read anything and everything. From novels to trading cards to the inside of CD covers (they’re still a thing, right?). A good day is when her kids bring notes home from school. A bad day is when she has to pry a book from her kids’ hands, just to break their concentration long enough to eat lunch. And then realizes where they get it from. The only thing Ann-Marie loves more than reading is traveling. And reading about traveling. And traveling to places she read about. She has expensive hobbies.

There have been five great read-aloud books since the invention of reading aloud. 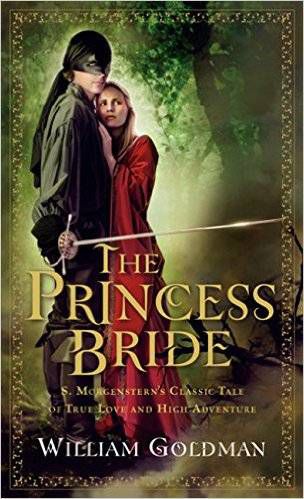 And The Princess Bride left them all behind.

This is one of those rare moments in literature and cinematic history when you will hear someone say, “The movie is as good as the book.” I know, I know. Book Riot is all about reading and books and the bliss from this simple luxury. In fact, it even says on our “About” page: “2. We always prefer the book to the movie.”

I’m going to be honest with you: The movie is as good as the book. I mean, there’s a reason so many people are excited about the 30th anniversary coming up on September 25.

There is an even better reason you should read the book. And if you start right now, you have a good chance of finishing it before the anniversary. Believe me when I say, it will add a whole new level to your enjoyment.

Because the magic of The Princess Bride comes from reading it aloud with another.

My Father Read It To Me

As a book, The Princess Bride, written by William Goldman, is almost inconceivable in its success. It is essentially a fictional story about a fictional book, retold by a fictional narrator who never read it. That’s right, folks; this is a book about a story remembered for its storytelling. Sure, it has heroes and princesses and six-fingered villains and swords and all the cool stuff. But the heart of the story…nay, the soul of the story is about reading it aloud to another.

For those more familiar with the movie, you probably recall the aging grandfather pulling out a book to read to his grandson, in bed with the flu or something similar. What many movie fans don’t realise is how closely this relates to the book: the narrator tells an abridged version of The Princess Bride as he remembers his father reading it to him.

Each night, father and son would read a chapter; over a month they read the book twice. Tales of adventure, daring escapes, bravery, fear. Love. They are all a part of the book but it is the memory of reading with his father that brings it all together.

So strong is this nostalgia, it is what motivates the narrator to buy the book for his son. Goldman vainly hopes to share the same connection with his son and recapture that feeling from his childhood…but this time, it does not hold the same magic. Why?

Because Goldman did not read it aloud with his son. He did not capture the magic itself.

In fact, it isn’t until he reads the book again himself, Goldman realises just how different his father’s version was. VERY different.

It’s All In The Delivery

Let’s start with the title: The book you are reading is The Princess Bride by William Goldman. The full subtitle is S. Morgenstern’s Classic Tale of True Love and High Adventure – The ‘Good Parts’ Version, Abridged by William Goldman.

Do not make the mistake of looking for the original Morgenstern novel; Morgenstern is a fictional writer. His “classic tale” never existed because the tale was never the primary focus of the story.

Instead, Goldman gives us a prologue with a fictional childhood and emotionally laden memories about this amazing book. Which, in reality, sucks.

There are good parts. We know that! However, it’s not the story he remembers. The “original story” is long and cumbersome, with sections way too heavy for a light-hearted romantic fairy tale. What Goldman does remember is the slow but silky voice of his father bringing the characters to life; his father, who Goldman describes as pretty much illiterate, making every effort to read the words correctly and hold on to the sense of the book.

“Even when I was able to read myself, this book remained his.”

How many of you can say that about your own books? When you recall your favorite book as a child, do you remember where you were? Do you hear the words in your head? Does the book itself have a soul already owned by another?

There is something absolutely delicious about listening to someone else reading a book. Not only do you have a great story to entertain you, there is the added bonus of inflection, character, and suspense. For example, the moment my husband builds the anticipation in his voice as he leads up to the inevitable cliffhanger awaiting the end of the chapter…It’s almost as good as the resounding “noooooooo!” from our children.

That’s how The Princess Bride is given to us by Goldman. It is delivered to us in the voice of his father, or at least the fun parts he remembers.

Is it really just ‘the good bits’? Of course not. However, I think that is the unexpected juxtaposition of the story. The fairy tale is merely the vehicle to draw you in. It is a beautiful story to capture the imagination of even the most recalcitrant pre-teen boy (just like Goldman himself). At the same time, it is a lesson about life and how we connect with people.

Just like life, there are dark parts to the retelling of this story. There are heart-wrenching moments where nightmares are filled with the psychological anguish that makes you wish for gore instead. Scenes of physical torture that suck the very breath out of you. Words that cut to the heart of the matter.

You don’t have to read them, if you don’t want to. I mean, if you start to feel a little worried. Or the person you are reading it with looks a little nervous—you can stop. That’s the beauty of reading with another: you share all the feels.

And it goes both ways. When you meet the gentle giant Fezzik, you can’t help but read his lines in a gentle but giant manner. When you reach the Zoo of Death, you can both point out strange and marvellous creatures. And every time you think of love, you will now have someone you can turn to, look deep into their eyes and softly lisp “twue wuv…”

Life isn’t fair, but it can be one amazing adventure to share with someone. Reading itself is an adventure. And when you take a beautiful story and read it with another, you allow the book to weave its magic in a binding spell to out-do all binding spells. Like a blood transfusion, you will always carry a little bit of this other person with you.

The Princess Bride is not Goldman’s book. It was his father’s because he read it aloud.

Now make it yours.