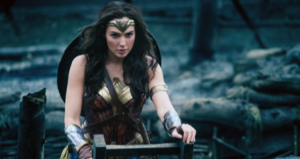 It was bound to happen, like it does with anything – the backlash against Wonder Woman. I’m not talking about the personal attacks on Gal Gadot (although that could be a post of its own, and an issue that seems particularly interesting since it doesn’t appear to happen with actors of other nationalities…). I’m talking about the myriad of Facebook posts I’ve seen, essentially saying that WW is nothing more than scantily clad, good-looking women kicking butt ORRRRR that it’s a glorification of the “American war machine.” (Let me say right here that the fact that Gadot filmed WW while pregnant is nothing short of superheroic to me, because personally, while I was pregnant, the mere thought of running or exerting myself exhausted me, and all-day nausea rendered me incapable of even being remotely social).

Thank you, everyone who is posting this – because you’re illustrating exactly why we need Wonder Woman, and why the movie is so important. Because it is a feminist commentary, and if that’s lost on you, the irony abounds. Despite the fact that we had an insanely smart and capable woman running for President (and look how THAT turned out, people…), we still have not seen a female-led (and female directed!) superhero movie. Especially not one that breaks free of being situated in the male gaze.

Laura Mulvey discussed the theory of the “male gaze” in film – essentially, images from the viewpoint of a heterosexual male. In this way, images that appear to be “empowering” to women are merely titillating to heterosexual men and actually uphold traditional roles, since, as Foucault has explored, the gaze can be representative of power dynamics. Whether consciously recognized or not, the gaze, and where it originates, can be a regulator – and self-regulator – of behavior and reinforce power structures (Thank you, Dr. DiQuinzio – 15+ years later, I knew my Feminist Philosophy class would come in handy!). Wonder Woman, to paraphrase Judith Butler, subverts the male gaze. In essence, Diana is not here for your shit. Her thighs – which are real and muscular – jiggle. Her outfit is utilitarian, and while, yes, she is “scantily clad,” it is less sexual than athletic. Her draw is strength and power, not sex appeal. She is not merely eye candy or a supporting role. If watching Wonder Woman feels different, it’s because it is different. We cannot – and should not – minimize or underestimate this.

Is Wonder Woman perfect? No. But it’s a hell of a good start.

And yet. People like David Edelstein, who wrote a terrible article about WW, then dug himself a bigger hole with his explanation about that piece, which read as nothing more but mansplaining upon mansplaining. He still ended up defining women in relation to men – Israeli women are strong because they are dealing with “angry Jewish men?”

If there was any question about whether people wanted to see a female superhero, the $103 million opening weekend in the US certainly answered that. One can only hope this bodes well for the forthcoming Captain Marvel movie. Maybe a Ms. Marvel movie is taking root? A girl can hope.