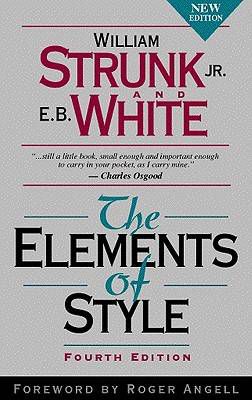 The Elements of Style, a slim writing handbook by E.B. White and his writing teacher William Strunk, is the Art of War of style guides. In bulleted lists and glossaries, “Strunk & White,” as it is called by acolytes, sets out, in a brisk 106 pages, an ethic, and maybe even a morality, of writing that could be reduced to one central dictum: be clear. From this pebble, concentric circles of advice ripple, laid out in 21 short maxims in the middle of the book: “do not inject opinion,” “use figures of speech sparingly,” “do not overstate,” “write with nouns and verbs,” and others.

The appeal, and the danger, of The Elements of Style is that it offers simplicity, clarity, and most alluringly, definition to the godawful mess that is the writing process. Follow Strunk & White assiduously, and you probably won’t embarrass yourself…but you probably won’t distinguish yourself, either.

For a writer who wants to be good, the only thing more important than knowing The Elements of Style is knowing when to ignore it. The authors themselves seem to tempt us to break the rules, as they themselves break them repeatedly throughout the book, sometimes with tongue clearly in cheek, and sometimes not. Here are a few examples of Strunk and White breaking their own rules, and why we might consider breaking them too.

“Use figures of speech sparingly”

One of the crutches of the book is to modify a command, softening its force. It’s the ‘sparingly’ here that is nettlesome; how do you know if you are in the pocket for using figures of speech? Indeed, in the 80-word explanation for this command, Strunk & White themselves use three figures of speech: “rapid fire,” “catch their breath,” and “no relief in sight.”  Strunk & White ignored their own rule here for the same reason you might ignore it: metaphors are a wonderful tool for conveying unfamiliar, abstract, or difficult information. They use them, and so can you.

Forget for the moment that an imperative such as this is itself an overstatement, and focus on the first sentence of the explanation:

When you overstate, readers will be instantly on guard, and everything that has preceded your overstatement as well as everything that follows it will be suspect in their minds because they have lost confidence in your judgment or your poise.

See, the thing here is that the statement “readers will be instantly on guard” is a gross overstatement of the consequences of overstatement. Sure, some readers will be on guard and some of them will even be on guard instantly. But a heck of a lot of them won’t. Strunk & White fall victim to the malady they are trying to prevent because overstatement often works in warnings. When I tell a child “never cross the street when the light is red,” I don’t actually mean that there isn’t the possibility that there might be a case in which to do so. What I am doing is stressing the possible danger and emphasizing the necessity of vigilance, just as this overstatement does.

“Avoid the use of qualifiers”

Here’s what they say: “Rather, very, little, pretty—these are the leeches that infest the pond of prose, sucking the blood of words.” Strong stuff.

The next sentence flouts the rule to show the perils of qualification–and to see if we are paying attention:

“We should all try to do a little better, we should all be very watchful for this rule, for it is a very important one, and we are pretty sure to violate it now and then.”

While this is clearly an intentional transgression, the mode itself, of intended deviation from standard usage, is also important. Sometimes writing inelegantly, even barbarically, has its uses. In this case, it’s a bit of a wink that adds humor and intimacy.

Even if we acknowledge that this breech of the code is purposeful, seemingly unnecessary qualifiers litter the books. In this sentence, from the explanation for “revise and and rewrite,” it’s difficult to justify the “quite”:

Quite often you will discover, upon examining the completed work, that there are serious flaws in the arrangement of the material, calling for transpositions.

Beginning the sentence just with “often” doesn’t change the meaning at all, so why add the qualifier? As far as I can tell, it’s just for rhythm. As any editor will tell you, cadence is a perfectly acceptable reason to keep an otherwise unnecessary word, but The Elements of Style doesn’t give readers the same latitude the authors themselves enjoy.

The imperatives in The Elements of Style are not ranked or otherwise prioritized, but the centrality of “be clear” is unmistakable:

“And although there is no substitute for merit in writing, clarity comes closest to being one.”

Strunk and White acknowledge that “clarity is not the only prize in writing, nor is it always the principal mark of a good style,” but stop short of discussing when a writer might sacrifice clarity for some other virtue, be it rhythm, irony, humor, or ambiguity—as they themselves do throughout The Elements of Style.

This is not a criticism of The Elements of Style, but rather a student’s re-examination of the master’s teaching. For most people who want to be better writers, it is an invaluable, perhaps singular, resource. But for people who love writing, and especially writing as art, it is not the end-goal of learning this devilish craft, only the necessary beginning.