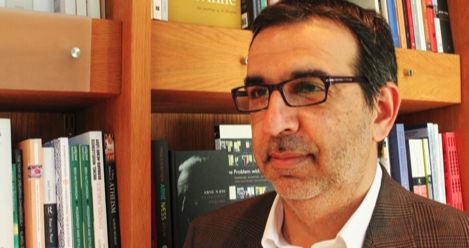 Embrace on Brooklyn Bridge is a novel that courts controversy, and Ezzedine Choukri Fishere is a novelist who isn’t afraid to engage unlikable — or even despicable — characters.

His novel-in-stories, shortlisted for the 2012 International Prize for Arabic Fiction, is now in muscular English translation by John Peate. The book unfolds in eight interlocking narratives, voiced by eight people related by blood, love, chance, and hate. All are supposed to attend the twenty-first birthday party of a girl who won’t be there, hosted by a man many of them dread seeing.

You can read more about the novel at Bookwitty. For BookRiot, I talked with Fishere — also a diplomat and political scientist who is teaching this year at Dartmouth — over email about why he’s not terrified of being trolled by the Brietbart set, why he writes unlikable characters, and the difficulties of making a character sympathetic to the 9/11 attackers.

Do you give out Albert Hourani’s History of the Arab Peoples on dates? 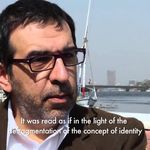 Ezzedine Choukri Fishere: You mean Darwish? At least he doesn’t recite it to his women; you got to give him that. Notice also that it was his wife who asked for a book explaining the history of the Arabs. What would he do? Give her a book he likes less? I think if he were still alive he would probably be sending ePub copies of it; with the “sure I will be there at 8pm sharp” email.

I see you as a master of unlikable characters. Not all of them were utterly exasperating, but in a contest between Darwish and his brother-in-law Daoud I couldn’t say who was more infuriating. (Okay, I lie, I found Darwish more infuriating.) What’s your interest in the unlikable/unpopular/taboo? Unless you don’t see them that way…

ECF: My novels are about the world we live in. Be honest: how many likeable characters do you have in your life compared to the unlikable ones? How many people do you meet and wish you could just punch in the face? Or, if you are not prone to physical violence, push a button and make them vanish? I tell stories about our lives. I tell the stories of these unlikables too. Unlikable people are more interesting: why are they so detestable – or annoying? Were they born that way or did something turn them into what they have become. In other words: what is their story? I want to hear their side of the story, and make it heard.

On the other hand, Rabab’s “unlikableness” works for her, I suppose unless the reader works for airport security.

ECF: Rabab is totally likable; she is neurotic but that is not necessarily unlikable. In fact, all of Brooklyn characters are neurotic, in different ways. It is the encounter of their neurosis that creates the novel. Her brief encounter with airport security is an example. Her neurosis pushes her to mother that innocent civilian, Adnan, who is just trying to go through the security check with the least possible fuss. Neither he nor the bored-to-his-ears security officer want an overbearing self-appointed-universal-consciousness mother to interfere with the process. But they can’t stop her. And she, while aware of the dynamic, can’t stop herself either. And this creates the incident at the airport, and so with the rest of the stories.

Although there is a good deal of 9/11 literature, there are very few (if any?) well-drawn Daoud-esque literary characters, either written in English or translated into English. Why do you suppose that is? Or perhaps you’ve seen others?

ECF: It is a risky endeavor. Someone who is not fluently immersed in Arabic language and culture would find it difficult to grasp the Daoudesque logic without falling into an Orientalist cliché or another (did I?). Arab novelists, on the other hand, come from the other side of Daoud. And they probably don’t empathize enough with these types to produce a well-rounded, convincing, believable Daoud. You need a subversive writer, who likes to put unlikable characters on stage, in order to produce that. And I have done it before; you have a whole bunch of Daouds in Abu Omar El-Masry (2010). And when a bearded middle-aged man took me aside after a book discussion in Cairo University and told me he had been in Afghanistan and met some of the “brothers” I mentioned in the novel, I was elated. Obviously, I had no idea who he meant; but it was the best confirmation that my characters were real enough to point him in the direction of real-life Islamist fighters.

At some of the blackest moments, there is also teeth-gritting, wincing humor. “Condemn or regret?” for instance. Are there moments you find funniest? Daoud seems to me, in a certain light, entirely funny, although finding him funny also seems taboo. Really, that whole chapter feels like you’re flaunting a giant red line.

ECF: I find irony in everything, including in tragedy – maybe because it is repetitive and predictable and people involved in it takes it and themselves too seriously. But irony and sarcasm are dangerous devices. And I have a fleeting sense that my fondness of irony will one day cause my demise.

Daoud and Goliath chapter does flaunt a giant red line, and I haven’t realized that until it was translated to English. In Arabic it sounded ordinary. You know, in the Arab World it is not only terrorists who have deep-seated grievances against the West and America. But when I saw the text emerge in English I could feel the red lines beaming beneath the words, and I am still unsure whether these lines are crossed. Can American readers transcend their position and understand the logic of their haters? Or will they be indignant and consider it an attempt to justify hate? We shall see.

What sort of research did you do for Youssef’s chapter?

ECF: None. I was in Sudan. I went to Darfur. I sat under the tree with the displaced. I saw the victims, and the perpetrators. I saw the limits of humanity. I did not need research.

Back to Daoud. I am 20% surprised that the Breitbart set hasn’t gotten hold of the Daoud chapter and posted it as documentary evidence on why Muslims shouldn’t be allowed in the US. Did anyone warn you, “Don’t translate a character like this into English!”? 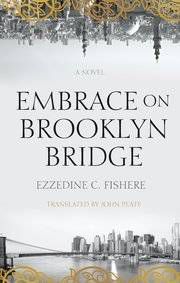 ECF: If people at Breitbart read Arabic literature, the world won’t be the same. And even though Daoud is their ideal “Muslim Ban” character, they still won’t read an Arabic novel for it. Hate, cultural prejudice and stereotyping require casting everyone under the same label. A novel showing a variety of Arab Americans struggling with – and reconstructing fluid identities is the antithesis of a “Ban On All Muslims.” Breitbart won’t read Embrace on Brooklyn Bridge, even for Daoud’ sake; I promise you that.

ECF: You were never offered one? Give your partner a copy of Brooklyn, then go together to Bergdorf&Goodman. If this doesn’t get you one, look for Luqman; he is one giving them out (he is a physician after all, he can afford it).

I don’t believe there are people who don’t like fuul. Are you sure about that?

ECF: Have you ever tried a fuul sandwich, at school, stuck in your backpack for hours, with thin wet pita bread falling around while the content itself is dry and cold, turned into one block with suspicious cracks in it? 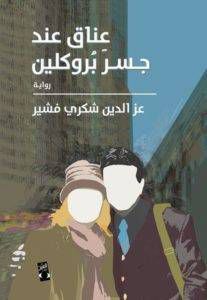 ECF: Men are just facades. Women are the movers and shapers. For each man in the novel there are at least three women who are, dramatically speaking, more important than him. Darwish? His life is shaped by women: his former partners, his daughter Laila (who is driving three of the novel’s male characters without even being in the US) and his granddaughter Salma. Adnan, the reclusive self-aware immigrant? it is his mother the main character in his story – and Laila. Rami, the castaway of American dream? It is his wife and two daughters who shaped his life. And Marieke, the Dutch Christian woman who holds the life of Luqman – and his chapter – in her hands (and gets the $600 woolen hat)? The novel is simply true to reality: men agitate, women create and shape life.

Albert Hourani and Edward Said are key pillars holding up Embrace, although not explicitly oppositional. I do note there’s no Robert Irwin or Bernard Lewis. Was it important that they were Arab thinkers for a book about Arabs and Arab-Americans?

ECF: This is not a novel about how others (say the “West”) see the “Arabs”. It is not Orientalism. It is not Tayeb Saleh’s Season of Migration to the North. They are all Arabs in the novel; thinkers and terrorists and lovers and alienated and victims and hopefuls and all sorts of people and quests and fears. And they are all struggling with these categories, and I hope that they – at least some of them – manage to go beyond them, redefine themselves in a freer way.

Did anyone get to the party?

ECF: Maybe the real celebration wasn’t in the party!