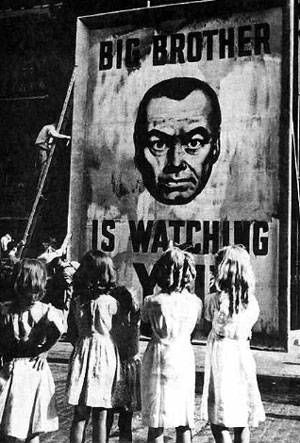 If President Obama signing the National Defense Authorization Act, Google tailoring ads to what we search for on the web, and full body scans in the airport hadn’t already made me feel a little like we were sliding back into the McCarthy era, realizing that I’m five years late to the Patriot Act Section 215 party would.

What’s the Patriot Act Section 215, you ask? Perhaps your library (or bookstore) has not issued you a warning (mine hadn’t, so don’t feel left out*). In that case, let me explain…

Section 215 is most commonly referred to as the “library provision”. It enables the FBI to gather records on “any tangible thing (including books, records, papers, documents and other items).” According to the American Library Association magazine website, in May of last year (2011), President Obama signed a four year renewal of the Patriot Act…

that included none of the reader-privacy and Fourth Amendment protections sought by freedom-to-read groups such as the American Library Association, the Association of Research Libraries (ARL), and the American Booksellers Foundation for Free Expression (ABFFE)… (thus allowing)… federal authorities conducting a counterterrorism investigation to seize someone’s library or business records unbeknownst to the individual and without a court order. Two members of the Senate Intelligence Committee also expressed reservations about renewing the Patriot Act, citing the possibility of interpretive overreach in how investigations are being conducted and cosponsoring a failed amendment… to increase transparency.

Why should this concern law-abiding U.S. Citizens, who have no record or ties to any terrorist groups? Because many of us like to learn about things that have no relevance to our everyday lives, and we like to learn about them through reading. We don’t want to have to worry that what we’re checking out or buying will make someone suspicious about our intentions (and if it does, what will happen with that subjective suspicion). In fact, I’d like to know the statistics on terrorists who utilize their libraries and bookstores to become better acquainted in ways to inflict pain on their victims. I’m assuming not many are using traceable avenues for procuring their information, and even less are getting giddy over the stacks of books in their local bookstores and asking the proprietor to order them a copy of the latest and greatest from the how-to-terrorize-large-nations section.

Does this section of the act actually worry me? Not particularly. Not now, at least. But I do think it’s a slippery slope. I don’t think US Citizens knew what was headed their way with the Second Red Scare of the 1940’s and 1950’s. I’d like to think that the same wouldn’t be possible today, but that would most certainly be naive.

*I’ve been informally informed that some libraries refuse to turn over library records without a warrant, and therefore go to jail for it (apparently one case was in Marilyn Johnson’s This Book Is Overdue: How Librarians and Cybrarians Can Save Us All); while other libraries opt to not keep much patron information in their systems so they  can’t give it when asked while legally staying out of jail.