If you answer yes to three or more of the following, this article is for you.

Please note that this is coming from a magazine addict. I am known for my addiction to (and ever growing collection of) magazines. I like to have them for workouts, traveling, vegging out, and even while I’m watching old re-runs on TV. I love me some magazines, folks. I love folding back the pages, ripping out things I like, bringing them to the hairdresser, and swatting yucky bugs with them. That said, what I am about to tell you might seem strange: if you answered yes to three or more of the above statements, it may be time for you to switch over to electronic magazines. Eek! I said it.
Do I read all of my magazines electronically? I confess, not yet. But I’m gradually moving in that direction (because I can still do almost all of the things I mentioned above with eMagazines) and let me tell you why.
Book Deals Newsletter
Sign up for our Book Deals newsletter and get up to 80% off books you actually want to read.
Thank you for signing up! Keep an eye on your inbox.
By signing up you agree to our terms of use 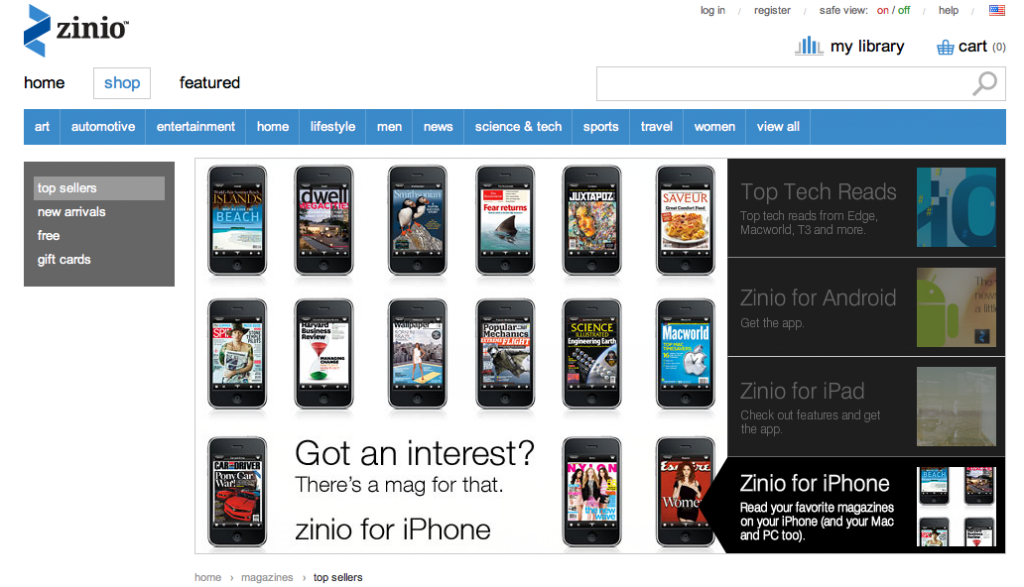 As you already know from several of my previous articles, I am an iPad girl. Being so, I decided to start reading my newspaper on my iPad as soon as I got it. I didn’t think twice before doing this, and my fellow passengers on the plane (though never formally thanking me) are grateful to not have me taking up half of their seat space as I try to turn the page in a paper form newspaper (though from time to time I still do it just for fun). However, one day a friend told me to go grab the newest copy of a certain magazine because she wanted to show me something. I, having too much time on my hands at that moment, rushed to the grocery store to pick it up. Not there. Then to the drug store… again, all out. Beginning to realize that running around town to find a magazine was starting to get a little pathetic, I eyed my iPad. Maybe, just maybe, I could get the magazine there. For the first time ever I downloaded the Zinio app (which is free) and before I could even begin my search for the magazine I was looking for (which they had, by the way, and would never sell out of), I was blown away by the number of publications offered through this app! Could this be? A magazine mecca right at my fingertips? 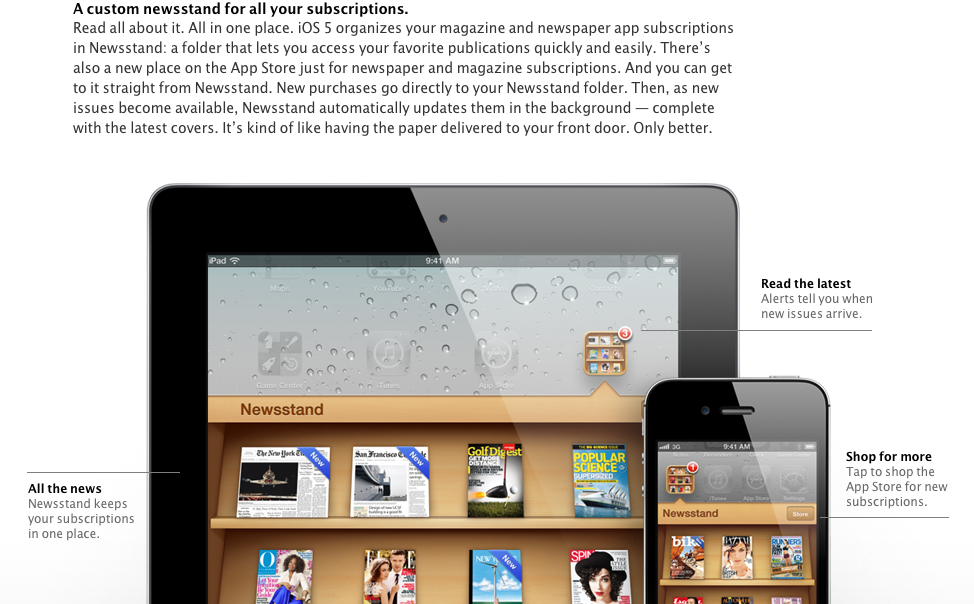 Months later Apple announced Newsstand as a standard permanent app on their new devices (and a permanent app for owners of previous devices once they update to iOS 5). Newsstand is Apple’s attempt to compete with Zinio. While there are features that are great (instant downloading of the newsiest issue of a publication and the aesthetic of an actual bookshelf) at the moment their selection of publications is greatly lacking. Also, after scouring forums about this very topic, I have found that Zinio offers publications at a consistently lower price than Newsstand — particularly to international consumers. Why did I take the time to scout this out when I was already using Zinio? Because it would be so easy for me to utilize Newsstand. It’s on each of my devices now. However, even I, as a dedicated Apple user, am not ready to make the switch. On top of the previously mentioned reasons, apparently (from what I’ve heard) not all publications bought through Newsstand for one device can be read on another (i.e. iPad and iPhone). Those of you who are Android users, Zinio works on both Apple products as well as Driods, thus giving them the leg up of having a wider audience (which is perhaps what helps keep their prices down).
I have no doubt that Apple will start giving Zinio a good run for their money over the next several months or so, but until then, I’m sticking with Zinio. I can forfeit the cute bookshelf looking app and the automatically updating publications (Zinio sends you an e-mail when a new publication hits your “stand” and then you tap the cover to download, while Newsstand’s newest issue automatically appears on your “stand”) for the lower prices, extensive shop, and the ability to read all of my magazines on each of my devices.
Have any information on this for us? Let me know in the comments section, would love to hear your opinions and any updates that I may have missed.