WARNING: SPOILERS for Me Before You ahead 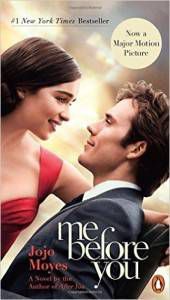 Me Before You is very much in my reading wheelhouse. I love women’s fiction, I love romantic themes, and I love the first person perspective. I might have loved this story about a small town English woman, Louisa, whose life was stunted by an overbearing family, a neglectful boyfriend, and an unacknowledged sexual assault. About how she learned, through a special relationship, to trust herself again and embrace the possibilities of being alive.

But I could not love Me Before You, because Louisa’s growth is predicated on the worthlessness of the life of her romantic partner, Will. As a result of an accident, Will has quadriplegia. I could tell you more about Will — he’s accomplished, handsome, smart, and amusing — but those traits are just window dressing. His positive attributes are mainly reminders of his lost potential and highlight how inadequate his life now is.

Will’s character, his relationships, and his plot are determined entirely by his disability: “for all intents and purposes [this wheelchair] is now the thing that defines me. It is the only thing that defines me.” From the point when the narrative introduces Will, he doesn’t grow or change. Yes, his relationship with Louisa helps him graduate from his stint as a Bitter Cripple, but that serves mainly to showcase Louisa’s winning charm. Will is the gymnasium where Louisa works out her life. She becomes patient, persistent, competent, self-assured, and loving by working on Will, often by literally working on his body.

In Me Before You, most chapters are narrated by Louisa. A few are narrated by minor characters: her sister, Will’s father, and his nurse. But we never get inside Will’s head, see things from his point of view. In fact, the whole plot is predicated on Will’s powerlessness: unbeknownst to Will, his mother hired Louisa to change his mind. No other characters with spinal cord injuries are physically present in the book, although Louisa develops some online relationships as part of her “research.” It’s typical of this novel that Louisa gets information about Will’s spinal cord injury from others, depriving him of being an authority even on his own body.

There’s only one scene where Will talks about how it feels to be him, very near the end when Louisa learns he is, after all, going to end his life. Consider the difference in how he describes their journeys over the previous six months:

This — and not the tragic ending — is why I can’t read Me Before You as romantic. Lou becomes a whole different person (“the world he had created for me, full of wonder and possibility”), but Will is just marking time. Her effect on him has been limited to making his life a little nicer while it lasts. He thinks he’s worthless from beginning to end (that “you managed to salvage something to love is astonishing to me.”). To me, a romantic story needs two roundly drawn characters who profoundly change one another, and one another’s lives.

There’s a scene where Lou and Will playfully acknowledge the fact that their worlds would never have collided if not for Will’s injury:

I’ve read lots of romantic stories where characters become more open-minded to dating outside the box when they meet the right person. But Will’s reply, “I was an arse,” doesn’t reassure me that he wouldn’t throw Lou off his lap and run after a rich leggy blonde if only he could. Has Will’s attitude about what he wants in a life partner changed? Or has he been forced by circumstances to look twice at a woman who would have been serving him drinks in any other context?

Many readers need a box of tissues at the end of Me Before You, because Will ends his life with the assistance of a nonprofit group in Switzerland. The novel tries to frame Will’s death as an expression of his autonomy, strength, and determination to live life on his own terms. But Will’s desire to die doesn’t organically flow from his character and his life experiences, as for example, in The Sea Inside, a film about the life and death of Ramón Sampedro Cameán. Instead, it feels like a choice so obvious that it doesn’t even have to be explained. The overwhelming feeling I got from reading this novel was that Will’s death was not the tragedy. Instead, Will’s suicide was the inevitable consequence of the real tragedy: his disabling accident.

I’m not complaining that the ending was sad, although when we step back and look at Me Before You as one among many stories with disabled protagonists in popular culture, it’s frustrating how predictable it is. Most are written by people without disabilities. To what extent does the very culture that creates and lovingly consumes narratives like Me Before You shut disabled writers out of the artistic process and the publishing pipeline?

As a reader, I wanted from Will’s story what I want from any story: to understand another human being. Why doesn’t Will work? Why doesn’t he have hobbies? Why did Will’s relationship end? Why doesn’t Will have sex? Why doesn’t Will leave his room? Why is he socially dead (he doesn’t even use the web or social media)? Why is his plan to physically die as well? When disability answers every single interesting question about a character, you don’t have a character. You have a composite projection of ableist fears, hopes, anxieties, and prejudices.

Will had many advantages: intelligence, drive, money, a helpful family, access to excellent medical care, and nursing support. Me Before You effectively explores Will’s impairments, the loss of function he experiences, the threat of infection and further debility, the often painful daily care he needs. But the novel depicts Will’s “tragedy” only as personal, as a misfortune that happened in and to Will’s body. The relational, social, and political dimensions of the experience of disability are left to the side.

Despite his privilege, Will didn’t have anyone who respected him enough to deeply engage with his feelings about his life. As a reader, I felt especially frustrated that no one confronted his depression. Even Louisa, for all her feisty working class grit (a topic for another post), tiptoed around him. The people around him believed that fun outings and good cheer would fix everything (“everything” being Will’s poor attitude). If Will wasn’t disabled, would it make sense for his loved ones to accept his desire to die at face value, working to reverse it without questioning and exploring it, without confronting him openly and honestly with their own feelings?

I’m not saying there’s no such thing as a rational suicide, or that there shouldn’t be suicide in fiction. In real life, there are people with terminal illness, debilitating chronic disease, and various types of disability who are not depressed, who do not lack resources, and yet for whom assisted death is a personal choice that makes sense. Those stories should be told. But after hundreds of pages, I don’t really know what Will’s story is. Even his death, arguably his most significant action, is kept off the page.

At one point Will says, frustrated, “Louisa is one of the smartest people I know, but I can’t make her see her own possibilities.” I felt exactly that way about the novel Me Before You.

Other voices on the book and film adaptation: