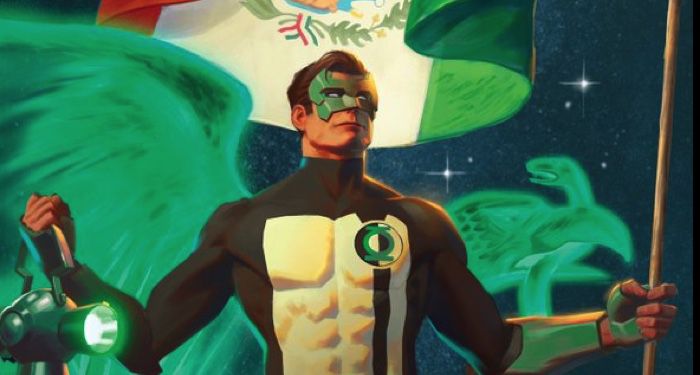 September 15 is the beginning of Hispanic Heritage Month in America, since that day marks Independence Day for most Central American countries. (Mexico’s Independence Day is September 16, but they start celebrating the night before.) DC Comics, which now has quite a few prominent Latine characters in their stable of superheroes, decided to commemorate the occasion with a series of special covers.

Every single one of these covers revolves around food. You’ve got the Question, two Green Lanterns, Bane (who is from the fictional country of Santa Prisca), and others (but not my man Bunker) chowing down on food and…that’s it. This is DC’s great tribute to the diverse and beautiful cultures of Latin America.

As unimaginative as this is, and as much as this has upset people, DC somehow found a way to dig themselves in deeper. The problem that has Twitter in a tizzy is the cover of Titans United: Bloodpact #1, which features Green Lantern Kyle Rayner (even though he’s not in the actual issue, but that’s another problem). The original cover by Jorge Molina is quite beautiful (though incomplete) and pays tribute to a famous painting, “La Patria,” by Jorge González Camarena.

Unfortunately, it ran into copyright issues and was never meant to see the light of day, but it somehow got out anyway. In any case, DC had to make changes to that lovely cover in order to officially release it. See if you can spot the differences.

Gimme a second to stop laughing and I’ll break this down.

Let’s start small. The grammar on that “Viva Mexico!!” flag is atrocious. It should be “¡Viva México!” Google Translate could have told you that.

Second, it’s just really ugly? Kyle’s grandiose pose on the original makes sense in context, but in the second, it looks like a particularly stupid advertising campaign: “Our tamales have a SUPER taste!”

Speaking of tamales, there are tamales, in case you hadn’t noticed, which of course you did because there is an entire bag full of them. So many that some are floating off into space. (Hey, there are worse Earth foods to let fall into the hands of unsuspecting aliens.) Because if you can’t pay homage to a celebrated Mexican artist, the next best thing is more food, apparently.

Another point I’d like to mention is that Kyle Rayner’s Mexican heritage has barely been a factor in his life. He did not grow up around his Mexican father and only found out he was half Mexican as an adult.

That is NOT to say that someone can’t learn about and embrace their heritage even after growing up. That’s nonsense — of course they can! And I would honestly love to see a comic that has Kyle learning about this aspect of himself. It could even involve him eating some tamales once in a while. (DC, call me.)

But DC doesn’t seem to have any interest in exploring Mexican history or culture, either in terms of Kyle’s family history or at all: they just trotted out his ancestry (and a whole lot of tamales) to cash in on Hispanic Heritage Month, after which I’m sure they will both vanish. Again, guys, Bunker grew up in Mexico and is right there if you wanted a cheap cash grab.

Fortunately, this story has a happy ending: a couple of days after tamales-gate, Molina tweeted that his original cover was going to be used after all and shared the official, completed version. While this is excellent news, it does not solve the broader problem of these Hispanic Heritage Month covers: the fact that they celebrate Latin food and nothing else.

But I Love Tamales. Why Is This Bad?

I don’t claim to be an expert on Mexican culture. I haven’t been there since I was ten. However, as your Friendly Neighborhood Mexican American, I do have some opinions on all this.

Now, is there anything inherently wrong with highlighting Latin food for Hispanic Heritage Month? Not really. Food is an important part of every country’s culture, so it makes total sense to include it in any celebration honoring that country.

So why is DC’s approach so awful?

Americans tend to reduce Mexican culture down to a few very specific aspects that they like and then discard the rest, along with the actual people behind that culture. They happily chow down on Taco Tuesdays or knock back margaritas on Cinco de Mayo, then they turn around and claim all Latine immigrants are drug-dealing rapists coming to steal “their” jobs. (Just for the record, no they aren’t and no the heck they don’t.)

In the worst case scenario, non-Hispanic Americans act (either jokingly or otherwise) like enjoying bits of Mexican culture means they can’t be bigots and have no duty to treat Latines as equals. In 2012, the mayor of West Haven, Connecticut, responded to accusations of anti-Latine bias and the question “what are you doing for the Latino community today” by saying “I might have tacos when I get home.” (His office was duly inundated with tacos.)

Since 2017, another aspect of Mexican culture has seeped into the American consciousness thanks to Disney’s Coco, which revolves around el Día de Muertos, an important religious holiday. It also pays homage to Mexican celebrities like Pedro Infante. I really hope this movie, which I love with all my heart, has made people more aware of different aspects of Mexican culture, including pop culture.

But Disney nearly ruined it all four years earlier by attempting to trademark the phrase “Día de los Muertos” — which, again, is a holiday, not a product. Here we have another example of non-Hispanic people wanting to own and profit from Latine culture without any regard for the people behind it. DC’s faux pas with these covers is nowhere near that level, but it’s part of the same problem.

What Should DC Have Done Instead?

Have Jessica Cruz enjoy some ranchera music! Let Kyle go to Xochimilco! Heck, have Blue Beetle team up with el Chapulín Colorado for all I care! At least that would indicate someone plugged “stuff from Mexico” into a search engine at some point instead of driving through the local Taco Bell and going “Hey, you know what would be fun?”

The fact that DC chose to focus on food and only food reiterates the fact that that’s the only thing about us America seems to value, and it shows a severe lack of care and respect for the cultures they are supposed to honor this month. Food is a part of Latine culture, not a substitute for the cultures as a whole. The point of Hispanic Heritage Month is to celebrate those cultures and educate non-Hispanic people about peoples and histories they don’t already know about. Spotlighting tacos and flan is overly simplistic, lazy, and unhelpful.

In an attempt to combat this unhelpful laziness, I have perhaps over-peppered this article with links that can teach you about all the cool Mexican things that DC missed. Even if you choose not to click on them, I hope you have gained something from my rantings, including something to think about the next time you bite into a tamal. (Yes, that is the singular form of tamales. The more you know!)