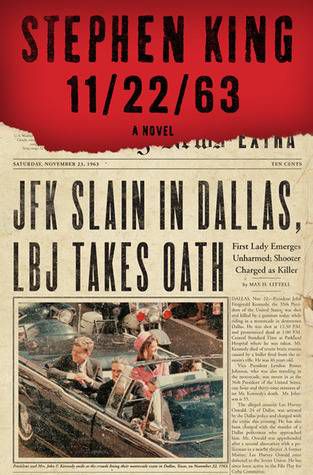 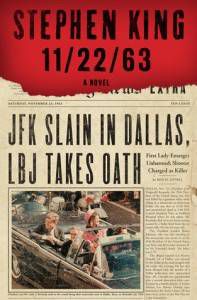 One of the books that I (and several other Book Rioters) have been buzzing over for the last several months is Stephen King’s newest novel 11/22/63. At close to 900 pages, the hardcover is surprisingly fast and easy to get completely engulfed in. The premise as described by the publisher’s website is as follows:

It begins with Jake Epping, a thirty-five-year-old English teacher in Lisbon Falls, Maine, who makes extra money teaching GED classes. He asks his students to write about an event that changed their lives, and one essay blows him away—a gruesome, harrowing story about the night more than fifty years ago when Harry Dunning’s father came home and killed his mother, his sister, and his brother with a sledgehammer. Reading the essay is a watershed moment for Jake, his life—like Harry’s, like America’s in 1963—turning on a dime. Not much later his friend Al, who owns the local diner, divulges a secret: his storeroom is a portal to the past, a particular day in 1958. And Al enlists Jake to take over the mission that has become his obsession—to prevent the Kennedy assassination.

So begins Jake’s new life as George Amberson, in a different world of Ike and JFK and Elvis, of big American cars and sock hops and cigarette smoke everywhere. From the dank little city of Derry, Maine (where there’s Dunning business to conduct), to the warmhearted small town of Jodie, Texas, where Jake falls dangerously in love, every turn is leading eventually, of course, to a troubled loner named Lee Harvey Oswald and to Dallas, where the past becomes heart-stoppingly suspenseful, and where history might not be history anymore. Time-travel has never been so believable. Or so terrifying.

It is, without a doubt, one of the most entertaining books I’ve read in recent memory. Suspenseful and well-written and just plain addictive, it’s become one of those books I’m recommending to everyone I know, much the same way I did with Justin Cronin’s 2010 zombie thriller tour de force, The Passage. (As an example, I forced my boss to buy it, and now he’s texting me with exclamations about what’s happening, and going, DON’T TELL ME WHAT HAPPENS! Like I would even think of doing such a thing. Because he’s going crazy for this book, everyone else in the office now wants to read it.)

I’m telling you, it’s fantastic and amazing and cuts across all reading tastes.

Normally, when this happens – that I read a new-to-me author and love whatever it is I’ve read – I want to read EVERYTHING EVER TO COME FROM THEIR PEN (or hard drive, whatever). But with this book, with King, I have absolutely no desire to explore his backlist.

For years, even before Cronin’s The Passage, people have been telling me to read The Stand or even The Green Mile, explaining that King’s books are more than the horror films that they’re adapted into. Over and over, I’ve been entreated by rabid fans that, no really, they’re not that scary.

But I know better. I know that I am a complete wuss when it comes to anything remotely scary, and that 11/22/63 is unlike anything else he’s written before. And while it’s my first King, unless he does something else like this, it’s also likely to be my last.

But I’d love to be convinced otherwise. In light of this New York Times article about authors selling books to publishers under a pseudonym to avoid comparisons to their previous books, am I doing the same thing? Am I prejudging unfairly?

With some authors, you can count on all of their books to have the roughly the same feel, the same kind of tone. I know what I’m getting when I pick up a book from Christopher Moore, or Chuck Palahniuk, or Toni Morrison. That can even be said for the most part of Stephen King. When you hear his name, you expect a certain kind of book. When I recommend this book to other people, I always add the clarification that I am not a King fan, that this is not standard Stephen King fare, in order to encourage them to read it.

I’m certainly not averse to reading outside of my comfort zone and exploring new genres, but I don’t think I’m missing much by not diving into his backlist.

But does good writing in general void that argument? Should I try more Stephen King because I liked the way 11/22/63 was written? Is that enough to push through subject matter that’s maybe not my cup of tea?

What’s your stance on the backlist?