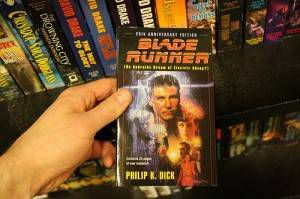 This week’s print issue of Entertainment Weekly includes the results from a reader poll of the most anticipated movies of 2012. The final tally wasn’t that surprising: The Hunger Games, Batman, The Hobbit, the next Twilight movie, but I did notice that 9 of the 10 top vote-getters were all adaptations of novels or comics. (The lone original is Prometheus).

It makes a certain amount of sense that anticipated movies are often adaptations; it’s easier to get excited about a story you already know. So this isn’t itself an indicator that adaptations makes particularly better movies, just that we tend to look forward to adaptations a bit more.

But if you look at all-time movie lists, it seems that adaptations do unusually well. On the American Film Institute’s list of the 100 best movies of the last 100 years, five of the top ten films are adaptations of novels (The Godfather, Gone With the Wind, Vertigo, Schindler’s List, and The Wizard of Oz) while two others come from non-fiction (Raging Bull from the memoir of the same title and Lawrence of Arabia, which is based largely on T.E. Lawrence’s own writing).

IMDB’s fan-voting yields similar results; of the top ten, six are straight adaptations and a seventh (The Godfather II) is derived from a novel.

The book nerd in me wants to declare that books make the best movies because, well, books are the best. A couple of things prevent me from claiming that, as much as I would like to. First, it’s hard to know what percentage of all movies are adaptations. It might seem like 70% of the top ten movies suggests you are better off adapting a novel if you want to make a great movie, but what if 80% of all movies are already adaptations?

Both questions are circling a deeper issue: if books are more likely to produce good movies, then what exactly does a book provide that an original screenplay might not? The answer, I think, is both pretty obvious and unexpectedly interesting; it’s the story. The thing that most of us understand as being the most important to a good film is the very thing that movie-making is bad at. For all of the money that goes into even small movies, it’s yet to be shown that throwing cash at the story has anything to do with the creation of a good one.

Books might be better at story for the simple reason that there are fewer elements for writers to manage; they don’t have to worry with lighting, directing actors, union schedules, notes from producers, bad weather, or any of the rest of the logistical concerns of movie-making. It makes a great deal of sense to let the people who are good at stories provide the stories and the people who are good a the craft of film-making make the films.

Books are simply the greatest story-technology ever invented because they have the least friction between imagination and expression. Movies might be the most immersive way to experience a story, but they are inferior vehicles for creating them. These days, many people are worried about the future of books, and rightly so. If the quality of our books declines, the quality of our movies might well be collateral damage.

(I do wonder though if adapting a book is a bit of a cheat. Shouldn’t Welles and Tarantino get more credit because they not only directed Citizen Kane and Pulp Fiction, but also came up with stories? So many of the best movies are filmed books that it seems like you should get extra points for an original story.)