Of course, I’m being facetious. Books are not evil. I heart books’ faces (as the parlance of our times would have it). But as with anything you love dearly, such devotion can make you do silly things at times — not unlike an addiction. Am I like the character Sarah in Michael Chabon’s Wonder Boys that narrator (and novelist) Grady Tripp describes thusly: “…(she) was an addict, and I was a manufacturer of her particular drug of choice”? Am I like Book Riot Contributor Liberty Hardy who is “always look for (her) next fix“?

Short answer: Indubitably. And as with any addiction, there are times when my devotion to the printed word has caused me to cross a line or two. Here are a few (hopefully humorous) examples from my own reading life (and I want to hear yours, too — please comment below!) of when my bookish addiction caused me to behave in ways I’m not proud of:

Inadvertent Condescension — Book-induced condescension and/or pretentiousness is not a side of me I like. Thankfully, most of the time it’s relatively harmless. Here’s an example: At one point during a rock concert (it was the Chicago band Chevelle, if you must know), I found myself wondering if I was the only one in the mosh pit who’d read War and Peace. The sad thing is that this happened last month. And I’m 35 years old. I’ll let you sort out all the layers of wrong about that little anecdote.

The Bad Neighbor — This past weekend, it snowed a bunch. I woke up Saturday morning with every intention of going out to shovel our sidewalk — the neighborly thing to do. Instead, I got lost in Margaret Atwood’s Oryx and Crake, and didn’t end up shoveling until well after noon. Indeed, this is just one of a million examples of books causing me to do something (reading) instead of something else (studying, showering, eating?) I really should have been doing.

The Bad Boyfriend — When I was reading Infinite Jest in the fall of 2008, I was so intense (read as: borderline psychotic) about it, that I practically abandoned my girlfriend. DFW caused more than one fight between us that fall, including one memorable night when she’d returned from a trip and wanted to come over, but I told her I was busy reading. Thankfully, she was (and still is) saintly enough to tolerate my bookish quirks. 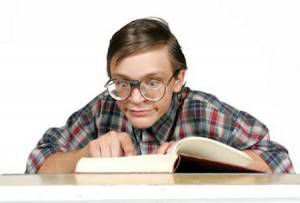 The Blubbering Fanboy — Writers are people, too. I know this. Doesn’t stop me from turning into your mom when The Beatles were on Ed Sullivan when I make my way to the front of the line to get a book signed. I can tell you this, I probably hold the record for most awkward interactions with published novelists. (I wrote about one such instance in the Richard Russo Reading Pathways post.) It’s a gift, I tell you.

There are many, many more. But I want to hear yours — tell us about the time(s) evil books turned you into something you barely recognized as yourself.