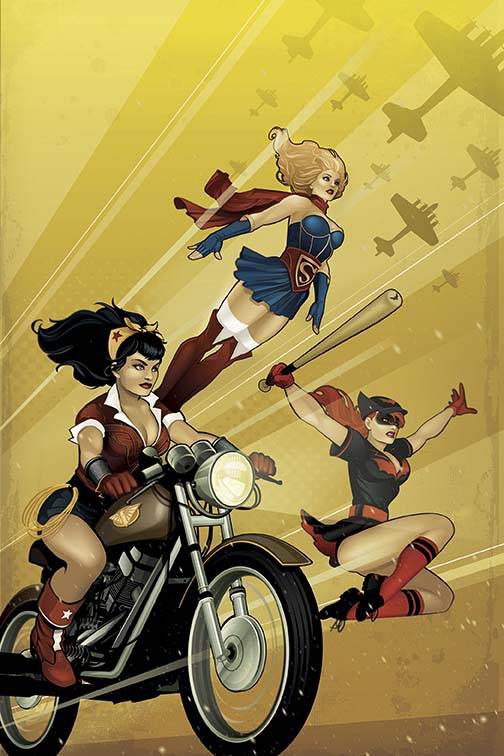 Over the last few weeks, DC Bombshells has blown me away. Originally simply a series of pin-up style variant covers last year, the covers and subsequent statues were so popular that DC developed it into it’s own series. Written by Marguerite Bennett, drawn and colored by Marguerite Sauvage with Art Lucia on covers, DC Bombshells introduces readers to an alternate DC universe where the United States joined the Allies much earlier and the heroines run the show.

The series is released digitally, one chapter at a time, with each set of three chapters collected in print as an issue. I’ve been reading digitally, which means every Saturday has given me a delightful 1/3rd of a comic. So with the first issue complete, I can confidently say I’m hooked by DC Bombshells. Let me tell you why.

The pages most widely advertised by DC come from this first chapter in the form of the very first scene — a family leaves the movies, is about to get mugged when all of a sudden the mysterious Batwoman leaps down and beats the brute. The couple’s son is amazed at the woman’s heroics … and it’s highly implied that the boy is Bruce Wayne. From the very start, we’re told that, rest assured, Batman will not be seen in this universe. His heroics will not be needed in this story.

And that’s the very much the tone of this book — this is a universe where the women at the forefront and are the only heroes. Chapter 1 gives us Kate Kane: heiress, well-traveled woman of adventure, former solder, and now a baseball-playing vigilante. She fights crime at night, plays ball during the day … and occasionally stops crime during the day, too.

She’s also discreetly dating Maggie Sawyer, the Gotham City police commissioner. It’s so easy for people to think that LGBTQ characters don’t “belong” in stories set in the past. But this is DC Bombshells, and DC Bombshells basically breaks down your door and shouts “Queer people existed in the 1940s! Deal with it!”

The scene of Maggie and Kate together in their apartment is my favorite in terms of art for this chapter; Sauvage’s faces are so expressive and you can feel how comfortable Kate is, not just in the safety of her apartment but with this woman herself. The chapter also hints at one of Kate’s past relationships that might come back, but you quickly become invested in this universe’s Kate and Maggie.

The biggest spoiler of the chapter is in the very last page, but it also happens to be one of the highlights of the whole first issue. I can say that a fan favorite shows up to give Kate an intriguing offer … that leaves the chapter at a cliffhanger.

Chapter 2 — Wonder Woman
On the surface, this chapter is par for the course as far as a Wonder Woman story at the beginning of her journey as a hero — pilot Steve Trevor’s plane crashes on Themyscira, Diana stands up for him, she learns of man’s world, and Diana realizes that the world of man needs her. Pretty standard Wonder Woman fare.

However, Steve Trevor’s plane isn’t faulty this time. He doesn’t even get hit by the Axis powers — no, its the Amazons who attack the Americans.

As Diana tells Steve later, it doesn’t matter that the Allied planes don’t realize the island is there — Themyscira has been hit by their weapons for months and the warriors of the island will defend their home. Oh sure, Diana and the Amazons are still merciful— they ensure their dying enemies who are beyond saving put out of their misery quickly and honorably — but we as comic readers are so used to Diana’s origin going like this: she sees a man falling from the sky and her immediate instinct is to save him. Here, it’s Diana taking down Steve’s plane himself. It’s a fascinating twist that I’ve never seen done before and I’m impressed Bennett chose to go there.

Sauvage’s triumph in this chapter comes in the form of the battle at the beginning. The narration is Steve’s, how he can hear Wagner’s Ride of the Valkyries as he sees the Themysciran warriors descend on his fellow soldiers. I don’t always connect well when music is invoked in comics — it’s a visual medium, after all. But the panel of Diana landing on Steve’s plane? Ride of the Valkyries switched on in my head. Everything from Diana’s pose to the lighting in the background to Steve’s narration (”I can hear the music — the trumpets — the drums”) came together in a cinematic reading experience. Bennett and Sauvage are proving themselves to be an in-sync creative team, where words and art come together for something special.

Chapter 3 — Supergirl
The last chapter of the first issue is by far the one that diverts the most from the classic origin of its heroine. We meet Supergirl as mere farmgirl Kara … except she’s Kara Duginovna and was raised on a farm in Tarakanova, not Kansas. The look at Russian women in WWII was a surprise and a delight, not least because so many details (including the Night Witches) come directly from real history.

More than anything, this chapter leaves me intrigued — this is a Kara without a Clark. There are so may ways Bennett could go with her. For now, we know she is rather sarcastic, skeptical of the Soviet government, and fiercely protective of her sister. Her sister Kortni has been confirmed by Bennett on social media to be Stargirl, which again leaves readers wondering how both women will make it out of Russia and team up with the other ladies. As far as what we do know, so much of the relationship between these two sisters comes through thanks to the art. The sly expressions between the women as they walk to their first day of training brings so much to the story.

The Issue as a Whole

With all three chapters put together, there is a sense of how they each connect together. The issue is named “Enlisted,” and each of the three main female characters is enlisted in one way or another. It’s also the start of this DC universe’s trinity and a sense that we’re on the cusp of these heroines meeting.

Beyond what I noticed in the individual chapters, there are beautiful things going on with the writing and art as a whole. I suspect as her star rises, Marguerite Bennett’s writing trademark will be her sense of language — DC Bombshells #1’s dialogue and narration includes the charm of an old-timey baseball announcer to the elegance of the Amazons to the sharp inflections of the Russians. While Sauvage’s style is consistent throughout the book, the colors vary greatly from chapter to chapter. Looking from the bright colors of Kate’s baseball game, then the contrasting grey-blues and reds of the stormy firefight over Themyscera and ending with the bleak greys and Communist red of Soviet Moscow punctuated by the bright yellows of Kara and Kortni’s hair. These details create so much depth for a very young series. In one single issue, Bennett and Sauvage have already started worldbuilding — building a whole new world for these iconic characters.