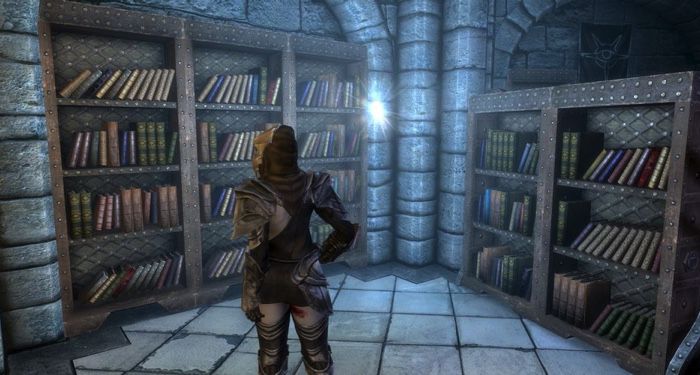 Quite frankly, I don’t want to know how many hours I have spent playing Skyrim in my life. It’s a game where I get to live out my dreams of having a wife, adopting two kids, and working as an adventurer/librarian. Oh yeah, and occasionally completing the main quests and saving the world or whatever. But, pretty much all of my favorite side quests have to do with retrieving long-lost books for the library at the Mage College. There’s nothing quite like reading a book you had to fight against a bunch of creepy undead monsters to get. In addition to rescuing books from skeletons, I also spend a lot of time bolstering up my own personal book collection. Sometimes I have to buy multiple in-game homes to have enough space for my favorites on the shelves.

If you are someone who has ever spent any time playing games with readable books, you know that they can range in importance from being just flavor to being plot-relevant artifacts. Whether the book is three pages or 27, someone had to spend time writing them, making sure that they contained the correct lore and history to give the player insight into the game. Or with fiction, the author would have to ensure it was in line with the ideals of the world. Writing either of those things takes a lot of skill and a deep understanding of the world. Knowing how much skill had to go into crafting these books I asked myself a question: Who writes these books?

Who writes for video games?

While the title can change depending on the company producing the game, generally the people who write the storyline are called Video Game Writers. They focus on the plot, dialogue, and character backstories that you find in most story-driven video games. A lot of times if authors are not directly credited with writing specific books, you can assume that it was a team who worked on the books rather than an individual. Though some video games will divide their video game writers into hyper-specific teams, this is less common.

Video Game Writers are usually broken up into different categories. Most games have positions like Lead Writer or Story Director that oversee lots of different writers. Some companies will even hire freelance writers, depending on the scope of the game they are creating. In most story-based games, a team of writers can be anywhere from ten to 50 people.

Why include prewritten books in video games?

Depending on the gamers’ style of play, often books only get skimmed or left untouched, if they are not directly relevant. There are very few players who seem to take the time to read any books, let alone as many as there can be in games. Why put in all the trouble? The short answer is immersion. Game Developers want you to keep playing the game. To dump time into it, to recommend it to your friends so that they want to go out and buy it as well. If there are books in a game, that means there are a few more minutes that a player will spend in the world if they read them. In sandbox/open-world games, it’s a way to make the player feel part of the world. It also gives those players who want to know the history and lore of the world a place to start.

Books in video games are often used to give the player skill or a piece of information in a less jarring way. Reading books can give the player knowledge that allows them to learn or advance a skill to aid them before a regular level up. Some books might also contain important information that the player can’t learn anywhere else.

Who cares about the books?

A lot of people! With a lot of the really popular games, there are entire forums dedicated to cataloging the books. Some try and collect all they can. Others play just to rescue books. People who love the game and who want to know more can read the lore while playing the game. Others, like me, just like the stories they find. If only I could count the books in Skyrim towards my Goodreads Challenge, I’d beat it within the first month.

Who specifically wrote the books for some of my favorite games?

Great question. A lot of times it’s hard to find that answer because it’s a whole team and not an individual. It makes sense, but I was bummed to find this out. I was hoping that the authors of these video game books might have their own published books. But after a little digging, I was able to find some specific writers who work on a lot of projects. So if you loved the books in one game, you might just like another they have worked on.

Who wrote the books in Elder scrolls?

For most Elder Scrolls games there is no clear attribution for the vast majority of books. Most likely it was a team effort with lots of the writers sharing the load. However, Ted Peterson was the sole writer of some of the books found in the games. He is credited with writing nearly 50 of the books in both Daggerfall and Morrowind, including some fan favorites. Ted has a long career of writing for video games so if you loved the books in Elder Scrolls be sure to look into more games he worked on.

Who wrote the books in Stardew Valley?

Stardew Valley is one of the best cozy games out there. If you’re a fan of the game, you may have collected some of the “Lost Books.” There are about 19 such books that you can find and read. Unfortunately, not a lot of information exists about who specifically wrote these books. Because they tend to be short (roughly a paragraph), we have to assume that it was the team of Video Game Writers who put together these reads.

Who wrote the books in Dragon Age?

Now this one we have a clear answer for! David Gaider was the lead writer of the game and led the writers in creating the writings that fill The Codex. If the name sounds familiar, it’s because David Gaider has written six books based on the game — three novels and three graphic novels. He is also in the process of developing a new project called Chorus: An Adventure Musical.

Who wrote the books in the Witcher?

Based on books themselves, The Witcher games feature a lot of plot-relevant books. Marcin Blacha was the Story Director and Lead Writer for the Witcher 3, the game that really put the video game series on the map. So, with over 70 books in the game, no single writer can take the credit, but you can still thank Marcin and his team for making the books happen.

What does all this mean?

Books in video games are not a new thing. Since the ’80s, when video games started having storylines, books started showing up in them. No video game currently claims they were the first to have a readable book, so exact dates are a bit fuzzy. What we do know is that as game styles become more and more immersive, books, scrolls, and readable materials are popping up more and more frequently. We also know that more times than not it is a whole team of writers working together to make the story happen. The process appears to be more like putting together a graphic novel or comic than a “traditional” book.

We may not know what the future of books in video games looks like, but we know we will have incredible video game writers to thank for it.