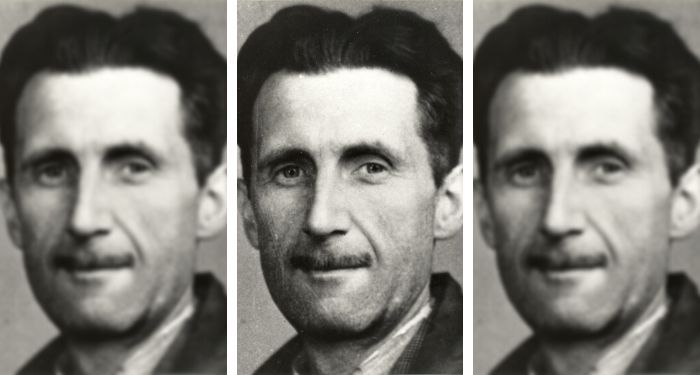 You’ve likely heard of the dystopian novel 1984 and maybe even Animal Farm. Sure, you might have known the author was British writer George Orwell, but maybe you’ve asked: Who was George Orwell, actually? In this article, we’ll explore George Orwell’s life and work so you have all the facts about this important and influential author.

When Was George Orwell Born?

Orwell was born with the name Eric Arthur Blar on June 25, 1903 in Motihari, Bengal, in British India. Orwell considered his beginning humble, even though his paternal great grandfather was wealthy and owned Jamaican plantations. His grandfather was an Anglican clergyman, and his father worked in the Opium Department of the Indian Civil Service. Orwell had a sister, Marjorie, who was five years older than him, and another sister, Avril, who was five years his junior. Orwell’s mother was French and moved Orwell and Marjorie to England.

Where Was George Orwell Educated?

Orwell’s family was too poor to send him to public school, but he obtained a scholarship to St. Cyprian’s School, Eastbourne, in East Sussex. Orwell detested the school, which later inspired his essay “Such, Such Were the Joys,” which was published posthumously and described his time at St. Cyprian’s. Orwell began at Eton, the prestigious boarding school, in May 1917. While at Eton, Orwell published in several publications. The family was too poor to send him to college, and Orwell’s grades were not impressive, so Orwell joined the Imperial Police in Burma.

What Did George Orwell Write?

Was George Orwell a Socialist?

George Orwell was openly a socialist. He joined the British Independent Labour Party in 1938 as a card-carrying member. His time fighting in the Spanish Civil War for the communist uprising fighters shaped his view of socialism. Orwell was influenced by Trotsky but never identified as a Trotskyist. Socialism was a common theme in his works of literature. In his essay “Why I Write” (1946), Orwell described this inspiration: “Every line of serious work that I have written since 1936 has been written, directly or indirectly, against totalitarianism and for democratic socialism, as I understand it.”

What is Animal Farm about?

George Orwell wrote the novella Animal Farm and published it in 1945. In this book, a group of farm animals execute a rebellion against their farmer, a human, and try to establish a utopian society. Unfortunately, the rebellion fails as the farm becomes a dictatorship that follows Napoleon, a pig. Orwell set to fictionalize the events that led to the Russian Revolution of 1917 and the ensuing Stalinist rule of the Soviet Union in Moscow. Orwell intended to critique Joseph Stalin and his brutal government, a position he formed during the Spanish Civil War when he fought for the POUM. In his essay “Why I Write,” Orwell expressed that Animal Farm was the first fiction book in which he consciously tried “to fuse political purpose and artistic purpose into one whole.”

George Orwell wrote the dystopian sci-fi novel Nineteen Eighty-Four (alternately 1984) and published it in 1949. This book was Orwell’s ninth book and final work completed while he was alive. Orwell was inspired to create the dystopian regime in his novel by the authoritarian Stalinist Soviet Union and fascist Nazi Germany.

The story is set in the year 1984, when the world is in a perpetual state of war. Big Brother, a dictator, runs the totalitarian nation Airstrip One, formally known as Great Britain. Big Brother gains supporters based on a cult of personality that the Thought Police, an arm of the Party, design and enforce.

Our hero is Winston Smith, a dutiful mid-level government employee at the Ministry of Truth. Smith detests the Party and privately hopes for a rebellion, keeping an illegal diary and engaging in a relationship with Julia, his colleague. Together, they learn about the Brotherhood, a secret resistance group. When Smith attempts to contact the Brotherhood, he encounters a member of the Party operating undercover. Smith is arrested and is tortured both mentally and physically by the Ministry of Love, released after he announces that he has come to love and embrace Big Brother.

How Did George Orwell Die?

Orwell suffered poor health in the end of his life and struggled with tuberculosis. On January 21, 1950, Orwell passed away at 46 years old. Orwell was buried in All Saints’ parish graveyard in Sutton Courtenay, Oxfordshire. Orwell’s gravestone’s epitaph makes no mention of his pen name and instead reads: “Here lies Eric Arthur Blair / born June 25th 1903 / died January 21st 1950.”

What Is George Orwell’s Legacy?

Undoubtedly, George Orwell has had a lasting impact on literature. Nineteen Eighty-Four remains relevant and widely read today. In fact, in January 2017, Nineteen Eight-Four sold out on Amazon as more people faced a reality that was eerily similar to Orwell’s visionary picture of a dystopian future. Terms Orwell introduced like “thought police” and “Big Brother” have become household words. Orwell’s novels are frequently taught in high school, and remain beloved texts even today. In this way, Orwell’s legacy lives on.