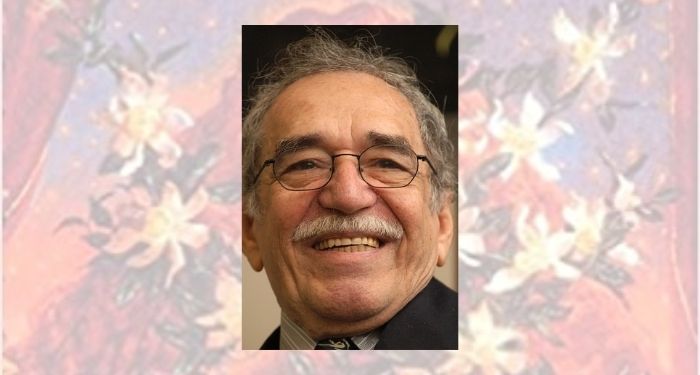 Gabriel José de la Concordia García Márquez — also known as Gabo, or Gabito to his near and dear ones — was born on March 26, 1927, in the town of Aracataca, situated in northern Colombia. García Márquez’s hometown would later be a source of inspiration for the fictional setting of Macondo described in his most famous work, One Hundred Years of Solitude.

García Márquez’s background resembles something out of a novel. His mother’s family moved to the coastal town of Aracataca after his grandfather, Colonel Nicholas Márquez Mejia — who served in Colombia’s Thousand Days’ War — killed a man in a duel. His parents had a forbidden love affair; the Colonel disproved of his daughter Luisa Santiaga’s affections for Gabriel Eligio García, a young telegraph operator who had a reputation as a womanizer and few financial prospects. After a romantic courtship, complete with violin serenades, exile, and even the purchase of a revolver by which Gabriel Eligio Garcia hoped to protect himself from the Colonel’s wrath, the couple eloped. When Luisa was pregnant with Gabriel García Márquez, the first of 12 children, her parents welcomed the couple back into the fold.

In 1940, García Márquez moved to Bogotá and studied in a Jesuit school, after which he studied law at the University of Bogotá in 1946. From these studies, García Márquez confessed to remembering very little because he spent most of his class time writing stories. Around this time, the editor of a Colombian newspaper El Espectador published an opinion piece saying that Colombia lacked talented young writers. García Márquez sent in a collection of short stories, which the editor published as Eyes of a Blue Dog in 1947.

When political violence closed the university, García Márquez transferred his studies to Cartagena, but soon began working as a journalist. From 1950 to 1952, he wrote a column called “La Jirafa (The Giraffe)” for El Heraldo, in the port town of Barranquilla. These writings contained the irony and humor that would later come to characterize his fiction. In 1954, García Márquez returned to Bogotá to work as a film critic and reporter for El Espectador.

“As a reporter,” he said to The Atlantic, “I was the lowest on the paper and wanted to be. Other writers always wanted to get to the editorial page but I wanted to cover fires and crimes.”

Once, a correspondent for El Espectador sent cabled reports of wild fighting in Quibidó. When García Márquez arrived with a photographer — after a long and arduous journey — they found the correspondent lounging in a hammock. He had sent false reports as a form of protest since Quibidó had been a quiet, sleepy town. Not one to be deterred, García Márquez, with the help of the photographer and correspondent, gathered sirens and drums and had the villagers pose for a fake rebellion. When he sent in his story, more reporters came to cover the so-called unrest. García Márquez rose up to the challenge to direct scenes of a more dramatic demonstration.

García Márquez covered a more exciting news story in 1955, when he interviewed a sailor who had survived a shipwreck, Luis Alejandro Velasco. García Márquez wasn’t the first to speak to Velasco, and all other published reports said he was aboard a naval destroyer crew that was struck by storm en route home from New Orleans, U.S.A. When García Márquez interviewed him, he found that there was no storm to begin with. Alejandro reported that the ship had been carrying black market goods on deck when high winds knocked the cargo loose. Out of the eight victims who had been thrown overboard, Alejandro was the sole survivor. Out came a 14-page exposé, signed by the sailor himself, that embarrassed the government and delighted the public. Later, while García Márquez was working in Paris as El Espectador’s correspondent, the government shut down the newspaper.

His first novel, Leaf Storm, was published the same year as the shipwreck articles. Although it was completed before, it took García Márquez about seven years to find a publisher. The story is told through shifting perspectives by a father, his daughter, and his godson, who are the only mourners at a village doctor’s burial.

It was while working in Europe as a correspondent that García Márquez was planning on making a film for Leaf Storm. He was stranded in Paris when El Espectador shut down and began writing a short story about violence while living hand to mouth. In a place where he had no legal right to work, and wasn’t fluent with the language, García fell back to writing as his safe harbor. The short story grew into one novel, and then two, eventually becoming No One Writes to the Colonel and In Evil Hour.

After eking out three years in Paris, García Márquez sold a series of ten articles on the Iron Curtain countries to newspapers in Bogotá and Caracas in 1957. He returned to Colombia and married Mercedes Barcha Pardo in 1958. He went on to write for Momento, a Caracas magazine, and published a collection of short stories, Big Mama’s Funeral, in Mexico, 1962.

One Hundred Years of Solitude

García Márquez lived in a number of places throughout his career, but it was while driving from Mexico City to Acapulco that he was inspired by the story that would form One Hundred Years of Solitude. García later said that if he had a tape recorder in the car, he could have dictated the entire first chapter. As it was, he went home, told Mercedes not to bother him, and holed up for 18 months writing the manuscript for the novel. When García Márquez finally came out of hibernation, his wife informed him that they were $12,000 in debt. Of course, she needn’t have worried. That 1,300-page manuscript, when published in 1967, sold out in a week. Over the next 30 years, more than 25 million copies were sold, and the novel was translated into over 30 languages.

One Hundred Years of Solitude is both a multigenerational family saga as well as a landmark work of magical realism. Characteristic of the genre, this sweeping story blends magic with everyday life as we follow the ups and downs of the Buendía family. The story is set in the fictional town of Macondo, a homage to García Márquez’s hometown of Aracataca. In an interview, García Márquez recounts how the book was appreciated for showing the intimate lives of Latin Americans. The book is known for its magic, but also for its heart.

His later novels dealt with different themes. Chronicle of a Death Foretold is a gritty detective story about a murder, published in 1981. Love in the Time of Cholera, a story about star-crossed lovers who meet and are separated for almost 50 years, came out in 1986. In between these achievements, García Márquez was awarded the Nobel Prize in literature in 1982, “for his novels and short stories, in which the fantastic and the realistic are combined in a richly composed world of imagination, reflecting a continent’s life and conflicts.”

It might seem strange to be awarded for a body of work, but perhaps less so for García Márquez, who once said that every writer tells one story.

“In general, I think a writer writes only one book,” he says in an interview that appeared in The Fragrance of Guava, “although that same book may appear in several volumes under different titles. You see it with Balzac, Conrad, Melville, Kafka, and of course with Faulkner. One of these books sometimes stands out far above the rest so that the author seems to be the author of a single, primordial work.”

García Márquez wrote four more books before his death in 2014 after a slow battle with dementia. Aside from his contributions to literature, García Márquez also set up an International Film School near Havana as well as a school of journalism on the Caribbean coast. He is survived by his sons, Rodrigo García Márquez, a filmmaker in the U.S., and Gonzalo García Márquez, a graphic designer.

After Leaf Storm was published, García talked about how he wanted the novel to reach everyday people. He says in an interview, “I believe that the general public will like it … that it will be popular and that in this way it will prove that the contemporary novel can reach the masses.”

I think he’d be happy to know that his rich and prolific body of work does reach ordinary — and grateful — hands.

The Last Interview and Other Conversations: Gabriel García Márquez by David Streitfeld