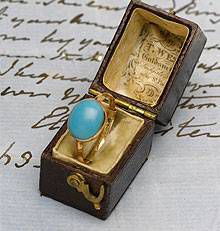 No, I don’t mean who here owns a copy of National Treasure with Nicholas Cage. I already know who you are and am judging you accordingly. Yes, you.

It is a truth universally acknowledged that this Book Riot contributor would do some bad bad bad things to own this ring.
(photo from cbc.ca/news/)

I’ve been thinking about the notion of national treasures of a particularly literary bent ever since reading this story about Kelly Clarkson, Jane Austen, and a ring. See, it so happens that Kelly Clarkson is a big Jane Austen fan, and in 2012 she bought a first edition of Persuasion (that’s my favourite too, Kel!) and a turquoise ring once owned by Austen. The ring itself had been passed down through the generations of the family before appearing at auction.

But here’s the rub: Kelly Clarkson can’t have it. Her £150,000 (what she paid for the ring at auction — about $225,000, give or take) is no good here. Oh, the book is fine — she can take the book. (The British Library is probably all, “Dude, we’re fine, we have it on Kindle.”) But not the ring. See, as you probably already know, Jane Austen was no J.K. Rowling in her day. She was pretty broke-ass and she died young. Ergo, she didn’t leave many treasures behind. So the UK has put a hold on the export of the ring in the hopes that a UK buyer will come forward. Kelly Clarkson has agreed to sell to such a buyer, because she seems like a pretty reasonable cat.

What do you think about this?

I mean, one can’t help but recognize the irony in BRITAIN claiming that it is important for objects of cultural significance to stay in their homelands. Have you been to the British Museum? Its tagline should be, “Stuff We Stole: Colonization’s Greatest Hits.” On the other hand, of course, Jane Austen is so ubiquitously English, and with the whole ten-pound-note business in the offing her cultural currency is higher than ever.

I’m curious about how Rioters feel. Is the acquisition obsession that accompanies fandom necessarily limited, sometimes, by physical borders? I haven’t figured out what I think yet. Come chat with me about this in the comments.