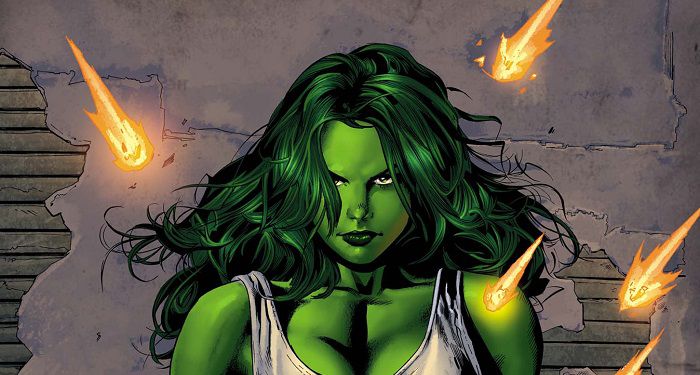 The Marvel Cinematic Universe spent more than a decade as a boys’ club, but that’s changing now. Captain Marvel, Wandavision, and Black Widow have proven that fans flock to see their favorite lady-badasses’ stories on screen. Now, She-Hulk is all set to join the MCU in 2022, when her self-titled Disney+ series premieres. Here’s everything you need to know about She-Hulk and her upcoming show, before she joins the MCU.

Why Did Marvel Create A Gender-Swapped Hulk?

It’s easy to forget that, before Robert Downey Jr.’s Iron Man in 2008, comic book characters spent years without live-action adaptations. When Agents of S.H.I.E.L.D. premiered in 2013, Marvel’s last popular TV show was The Incredible Hulk, which went off the air in 1982. She-Hulk owes her existence to that cheesy TV romp.

According to Rotten Tomatoes, Marvel created She-Hulk just to keep a gender-swapped Hulk IP out of someone else’s hands. The Incredible Hulk‘s producer, Kenneth Johnson, was also behind both The Six Million Dollar Man and its female-centric spin-off, The Bionic Woman.

She-Hulk debuted under her own title, The Savage She-Hulk, in February 1980. One of the last comic-book characters Stan Lee had a hand in creating, she’s been in print almost continuously since. The Savage She-Hulk ran for 25 issues, ending in March 1982.

Throughout the 1980s, readers saw Shulkie join the Avengers, fight in the Secret Wars, and replace the Thing in the Fantastic Four. Her second outing, The Sensational She-Hulk, was “the longest-running female solo series in Marvel history up to that point,” according to Bitch. Two more She-Hulk solo series launched after the new millennium, but neither was as popular as The Sensational She-Hulk.

So, Who Is She-Hulk?

She-Hulk is the green alter-ego of Jennifer Walters. A successful defense attorney, Jennifer comes from a family well-steeped in the criminal justice community; her father, William Walters, is the L.A. County Sheriff.

William’s known for being overprotective of his daughter, but with good reason. His work puts him at odds with crime boss Nicholas Trask, who tried to assassinate William when Jennifer was 17. Tragically, the attack killed Jennifer’s mother, Elaine Banner Walters, instead.

How Did She-Hulk Get Her Powers?

Years after he killed Elaine, Trask set his sights on eliminating Jennifer. Critically wounded by Trask’s goons, Jennifer needed a blood transfusion to live. Luckily, her cousin, Dr. Bruce Banner, happened to be visiting her at the time and was a perfect match. His blood saved her life, but also passed on a milder version of his recently acquired Gamma powers.

She-Hulk Vs. The Hulk: How Are They Different?

Much like Bruce, Jennifer’s transformations hinge on her emotional state, at least at first. But once she gets a handle on her powers, Jennifer’s able to transform into She-Hulk at will, just by thinking angry thoughts, Peter Pan style.

The ease with which Jennifer transforms may be due to another difference between her Hulkly experiences and Bruce’s. Jennifer doesn’t experience pain when she becomes She-Hulk. Where the Hulk’s transformations are excruciating, Shulkie’s are pleasurable…really pleasurable.

That, in turn, could be why Jennifer’s more comfortable existing in her Hulked-out form than Bruce is in his. As is the case with Bruce’s Professor Hulk persona in Avengers: Endgame, Jennifer’s intellect remains intact whenever she becomes She-Hulk.

Despite these differences, many of Jennifer’s Gamma-gifted powers are nearly identical to those of her cousin. She-Hulk has the same accelerated healing factor as the Hulk, making her pretty much invincible. Her super strength and agility give her incredible jumping abilities, reflexes, and stamina. Shulkie also shares Hulk’s resistance to telepathy, which makes her a formidable opponent to the likes of Legion and Apocalypse.

Is Jennifer Walters The Only She-Hulk?

The She-Hulk mantle, like those of many other Marvel heroes, hasn’t remained exclusive to just one person over the years. Likewise, Jennifer Walters hasn’t only been She-Hulk, either.

Back in the late Aughts, Marvel introduced Lyra: the Hulk’s daughter from an alternate timeline. Unlike most Gamma-irradiated heroes and villains, Lyra — whose mother conceived her using Hulk’s DNA — actually grows weaker the angrier she gets.

Nicknamed “She-Hulk” as a child, Lyra traveled back in time to battle Jennifer over the course of a few comics, including her four-part solo miniseries, All-New Savage She-Hulk. Later, Lyra and Jennifer teamed up to defeat a mutual enemy: Red She-Hulk.

Red She-Hulk — AKA She-Rulk — is one of the many transformations of Bruce Banner’s main squeeze, Elizabeth “Betty” Ross. After the Abomination killed Betty, M.O.D.O.K. revived her as the Gamma-powered Red She-Hulk, thanks to the influence of her father: U.S. General Thaddeus “Thunderbolt” Ross — AKA Red Hulk.

As Red She-Hulk, Betty opposed both Lyra and Jennifer, as well as Bruce and Red Hulk. Unlike Jennifer, Betty struggles to control her transformed self. She’s sought out multiple cures for her condition, but they’ve all failed up to this point.

An all-new version of She-Rulk will appear in an upcoming Avengers issue. Kidnapped and forced into the infamous Red Room, Jennifer becomes the Winter Hulk — a Soviet-aligned version of Red She-Hulk, complete with Black Widow levels of training and conditioning — in Avengers #48, releasing in September 2021.

Who Are She-Hulk’s Enemies?

In her work with the Avengers, A-Force, and Fantastic Four, Shulkie’s come up against many of Marvel’s biggest villains. However, unlike many Marvel heroes, she doesn’t have a huge stable of nemeses to call her very own. Aside from the aforementioned Nicholas Trask and She-Rulk, there’s one important villain who keeps coming back to fight She-Hulk.

Introduced in the original Secret Wars storyline, Mary MacPherran was a slight, shy girl, very much like Jennifer. After the Beyonder tore their Denver suburb out of space and time, Mary and her BFF, Marsha Rosenberg, received superpowers from Doctor Doom. As Doom cronies Titania and Volcana, Mary and Marsha fought numerous Avengers, including She-Hulk and Spider-Man.

Although Volcana would go toe-to-toe with Shulkie after their return to Earth, it’s Titania who antagonizes her again and again.

Who Will Play She-Hulk In The Disney+ Series?

Marvel has tapped Orphan Black star Tatiana Maslany to star in She-Hulk on Disney+. The 35-year-old Canadian actor will play Jennifer Walters in both her average human and Hulked-out forms.

The series also stars Jameela Jamil (The Good Place) as Titania and Tim Roth (Lie to Me) as Hulk’s archnemesis, Abomination. Roth first played Abomination in the 2008 Hulk film, and will reprise the role in Shang-Chi and the Legend of the Ten Rings, which lands in theaters on September 3, 2021.

Mark Ruffalo will reprise his role as Bruce Banner for the Disney+ series.

What Should Fans Expect To See In The Show?

In December 2020, Emmy reported She-Hulk would “be a half-hour legal comedy” that “stays true to [Sensational She-Hulk] writer-artist John Byrne’s comic books.” That name drop gave Shulkie fans hope for some metatextual awareness in She-Hulk on Disney+. Two years before Deadpool made his action-comedy debut, Jennifer was already famous for breaking the fourth wall, much to the confusion of her fellow comic-book characters.

Will She-Hulk Appear In The Marvel Movies?

All signs point to yes on this one. The new Disney+ series features both the Hulk and Abomination, which puts Jennifer in close proximity to big screen MCU releases. Outside of the She-Hulk TV series, there’s the Fantastic Four reboot coming in Phase Four, which could make some space for everyone’s favorite green lawyer.

The Fantastic Four movie and the recent multiverse reveal could mean Marvel’s Secret Wars will come to the MCU. The original Secret Wars run set the stage for She-Hulk to meet Titania. The Avengers, X-Men, Spider-Man and Spider-Woman, and the Fantastic Four fought the Enchantress, Kang the Conqueror, Venom, and Doctor Doom, among others, in that crossover event.

Even if Secret Wars doesn’t happen in the MCU, Marvel fans have another major crossover event to look forward to. Disney+’s forthcoming Secret Invasion series draws inspiration from the comic-book storyline of the same name, which included three issues of She-Hulk vol. 2. Marvel Studios has the series under wraps for now, but, if the showrunners stick to the source material, it’s likely we’ll see Jennifer Walters fighting Skrulls very soon.