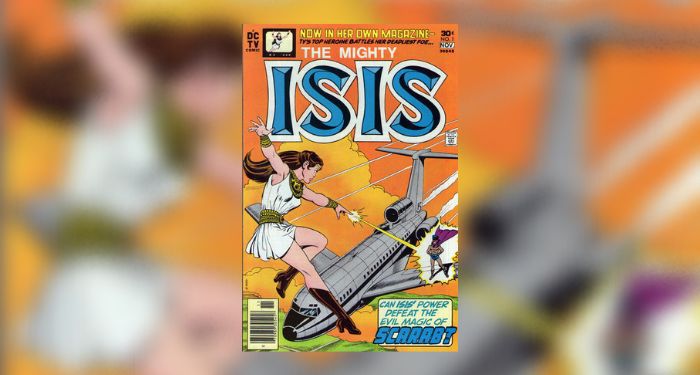 This month, the DC character Adrianna Tomaz, sometimes known as Isis, makes her cinematic debut in Black Adam, where she’s played by Sarah Shahi. Isis has an unusual history, with a unique path from the small screen to the comics and back to the small screen, and finally to the big screen. On the one hand, she’s a fairly obscure character. On the other, she’s one of the most groundbreaking female characters in superherodom. Why the contradiction? Let’s take a look!

The first version of Isis debuted not in comics, but on television — and in her own show, no less! Specifically, she starred in Isis (renamed The Secrets of Isis for syndication). This was a spinoff of Shazam!, a half hour Saturday morning show starring Captain Marvel that started in 1974. (These days he’s known as Shazam, with no relation to the Marvel character played by Brie Larson. You can read about the tumultuous legal history of Captain Marvel/Shazam here.) Within a year, the show was popular enough that it was expanded into The Shazam!/Isis Hour, with the second half hour dedicated to Isis. Her 1975 debut means she predates both The Bionic Woman and Wonder Woman (both 1976), making her the first live action female superhero to headline her own show. Not too shabby!

Isis, played by Joanna Cameron, is secretly Andrea Thomas, an ordinary high school teacher who finds a mystical amulet on a dig in Egypt. You know, the kind high school teachers go on. Luckily, Andrea just so happens to be a descendant of the pharaoh Hatshepsut, which means that the amulet grants her superpowers when she speaks the magic words “Oh mighty Isis.”

Here’s the show’s intro. I hope you’re not lactose intolerant, because it’s time for some cheese:

Obviously there is a glaring problem here, which is the usual Hollywood one of a white lady playing someone who is supposed to be Egyptian (albeit several millennia removed…but still). But I still think it’s worth pointing out that there was a TV show starring a female superhero that predates Wonder Woman that…no one talks about? Basically ever?

This version of Isis got her own tie-in comic in 1976, which ran for eight issues over two years; she also appeared in Shazam!, Captain Marvel’s comic. She wasn’t otherwise incorporated into the DC universe, which makes sense. At the time, the Captain Marvel characters were only licensed by DC, and they existed in their own universe, separate from the main DCU. They were folded into the DCU in 1985’s Crisis on Infinite Earths (and DC acquired the full rights to the characters in 1981), but by then Isis’s series was long canceled. Also, Universal Television owns that version of the character, not DC, since she debuted on TV first. (This is why Marvel rushed She-Hulk into comics around the same time, before the Incredible Hulk TV show producers could invent her.)

Isis languished in obscurity until 2006’s 52 maxiseries, when DC introduced a heavily revised version of the character. The updated Isis is an Egyptian woman named Adrianna Tomaz (in a hat tip to the TV version), who is enslaved and given as a gift to Black Adam, who at that time was the ruler of the fictional nation of Kahndaq. Black Adam, who for all his faults is not a fan of slavery, promptly frees Adrianna and kills her enslaver. Then, in a classic romance trope, when he discovers that she’s unafraid to tell him exactly what his failings are as a ruler and man, he promptly falls in love with her. It’s genuinely pretty great.

Adam asks Captain Marvel to bequeath powers on Adrianna, using a version of the Hatshepsut amulet, and Billy agrees. The newly empowered Isis has similar powers to Adam’s, as well as healing and nature powers (flowers bloom when she’s happy, etc.). Black Adam and Isis then rescue Adrianna’s younger brother Amon from slavery and grant him powers as well, turning him into the superhero Osiris. For an all too brief time, the three are happy together, using their powers for the good of Kahndaq and the world.

…But we’re talking comics in the late 2000s, so I’m sorry to tell you it all ends horrifically. Like, I don’t even want to describe it. Let’s just say that cannibalism is the least triggering of the atrocities that ensue and leave it at that, okay?

Isis had a relatively small role in the 2011 New 52 reboot, but a new version of her returned to television in 2017, in Seasons 3-7 of Legends of Tomorrow. Zari Tomaz (played by Tala Ashe) is a Muslim hacktivist from a dystopian near-future, with no connection to the Shazam family; she does have a hereditary magic amulet, but it gives her wind powers and not the other suite of powers her comics counterpart has. She also does not go by “Isis,” because by then the militant organization ISIS was too prominent for anyone to be comfortable with the name; given the different name, powers, history, and lack of codename, I suspect even a lot of comics fans never connected her to the character in the comics. Zari is eventually erased from the timeline and replaced by Zari Tarazi, an alternate version of the character played by the same actress, who is basically a socialite from the future, because Legends was a delightfully bananas show and I miss it every day.

And now we have the cinematic version of the character in Black Adam: Adrianna Tomaz, a university professor and resistance fighter in Kahndaq. Obviously this is different than any version we’ve seen before, although she skews closest to the comics version. At the time of this writing, I haven’t seen the movie, so I can’t say whether Adrianna will fall in love with Adam, or get powers, or [redacted horrible things from circa 2008]. Hopefully not that last part.

No matter what story Adrianna gets in the movie, she’s had an interesting journey to get there. There have certainly been missteps, like the whitewashing in the ’70s, and a whole heap of misogynistic tropes in the late 2000s. But she’s still an important figure in superhero history who rarely gets her due. Hopefully Black Adam treats her well, and hopefully her rising star means we get many more Isis stories to come. I, for one, am eagerly awaiting them.