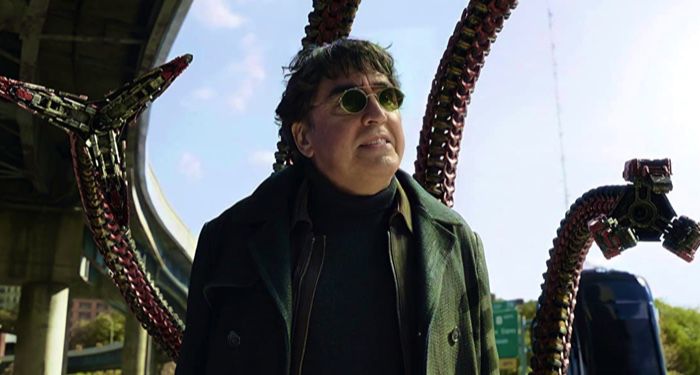 By now, you’ve certainly seen at least one trailer for Spider-Man: No Way Home. In the first one, near the end, a familiar villain appears from 2004: Doctor Octopus.

Maybe you recognized him from the old Tobey Maguire days. Maybe you saw a de-aged Alfred Molina in sunglasses and wondered, “Who in the name of Stan Lee is that?” Here’s a quick primer on Doctor Octopus.

Dr. Otto Octavius, AKA Doctor Octopus, first appeared back in 1963 in The Amazing Spider-Man #3. Doc Ock is one of those classic comic book supervillains created by Stan “The Man” Lee and Steve Ditko in the early days of Spider-Man. Otto was a brilliant scientist who developed a set of four mechanical arms. While he originally created them for good (or at least neutral) purposes, a lab accident permanently bonded the limbs to his back, and the super-criminal Doctor Octopus was born.

Dr. Octavius was never a fit man, carrying some extra pounds and being terribly nearsighted. His limbs, however, and his ability to control them with a mere thought, have made him one of Spider-Man’s greatest villains. Like many a mad scientist villain, his mind often poses the greatest threat. He holds a PhD in nuclear science and is an inventor nearly on par with the likes of Tony Stark. In addition to his tentacles, he has build various machines throughout the years to accomplish his goals and wage war against Spider-Man and his allies, even besting Iron Man and Hulk in the past.

He has not only proved a physical match for the web-crawler, but is the founder of the Sinister Six, the definitive supervillain team that opposes Spider-Man. It’s gotten to the point in the comics that you have to wonder who Doctor Octopus really is without his nefarious allies.

First appearing in The Amazing Spider-Man Annual #1 in 1964, Otto’s original Sinister Six included himself, Electro, Kraven the Hunter, Mysterio, Sandman, and Vulture. In this first appearance, Doctor Octopus kidnapped Aunt May and Betty Brant simply to lure Peter Parker into headlong into a battle with his most formidable foes. Spider-Man, of course, triumphed.

Over the years, the Sinister Six has included virtually everyone in Spider-Man’s rogues’ gallery, including Venom, Lizard, Tombstone, and Shocker. There have been Sinister Six comics and variations on the team up to Sinister Sixteen. From meager, eight-legged beginnings…

Filed away in the so-crazy-it-could-only-happen-in-comic-books file, in The Amazing Spider-Man #699, Spidey and Doc Ock tussled. Otto used a robot to switch bodies with Spider-Man, killed Peter-as-Otto, and then realized his own mistakes. With Peter dead and Otto in Peter’s body, he took over as Spider-Man.

He was a more violent, but also more effective Spider-Man. His insights into the villains of the Sinister Six gave him an edge. He also patrolled the city with thousands of Spider-Bots. It was a fun, strange time to be reading Spider-Man, but as all things in comics, Otto and Peter eventually returned to the status quo.

So who is this Doctor Octopus? If we’re looking to the upcoming Spider-Man: No Way Home, then we really have to look back to the 2004 Spider-Man 2 to best answer the question. In that movie, Dr. Otto Octavius is working for Oscorp on fusion power, using metal arms with artificial intelligence to handle the hazardous materials that are part of his work. He befriends Peter Parker and invites our hero to a public demonstration of his work.

Spoilers ahead for Spider-Man 2.

As you can well predict, something goes wrong. In the middle of the demonstration, there is a power surge. Otto does everything he can to contain it, but the fusion power loses containment, killing Otto’s wife and burning through the inhibitor chip that keeps the artificial intelligence in the tentacle arms from interfacing with his own nervous system.

Enraged by the death of his wife and twisted by the influence of the artificial intelligence, he seeks to correct his failed experiment by any means possible. He makes a deal with Harry Osborn: his needed rare element in exchange for Spider-Man. In the end, Peter (revealing himself as Spider-Man) is able to reach the humanity in Otto, and Otto sacrifices himself to stop his experiment from destroying all of New York City.

No Way Home: The Future

This all begs the question: which Doctor Octopus will we see in the upcoming movie? Really, it makes me wonder how, but that likely has something to do with magic and multiverses. Let’s focus on who.

Since he already has the tentacle arms, trench coat, and shades in the trailer, it’s safe to assume this is the version of Otto who has already lost his wife. Will he be the maniacal and desperate Doc Ock trying to replicate his experiment? Or is this the version of Otto who took back control, somehow surviving his own sacrifice to arrive as a friend and mentor to Peter Parker?

There’s also the possibility that the trailer is a ruse. Remember in the trailer to Avengers: Endgame when they were walking as a team, not wearing their time suits and without smart Hulk? Yeah. Trailers can totally lie to us. We’ll just have to see on December 17.

So who is Doctor Octopus? Friend, boss, and mentor to Peter Parker. Mad scientist. Genius. Criminal, supervillain, and leader of the Sinister Six. One-time Spider-Man. In any incarnation, he’s one of the best characters in Marvel. I’m excited to see him back on film.