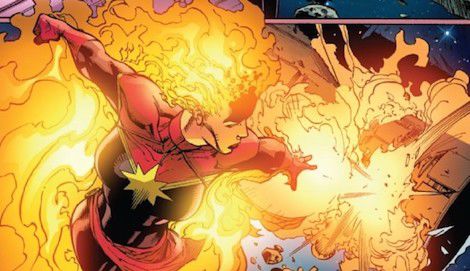 Whether you are a casual movie goer or deeply involved in the Marvel Cinematic Universe (MCU) fandom, you are probably aware that Marvel’s first female-led movie, Captain Marvel, is now in theatres. And with the head of Marvel Studios making comments about Captain Marvel being front and center and leading the next phase of the MCU, she is definitely a character you will want to know more about. As a member of the Carol Corps (yes, we Captain Marvel fans have our own name), I invite y’all jump right in and learn more about Captain Marvel in this introduction to Carol Danvers, both the comic and movie character. 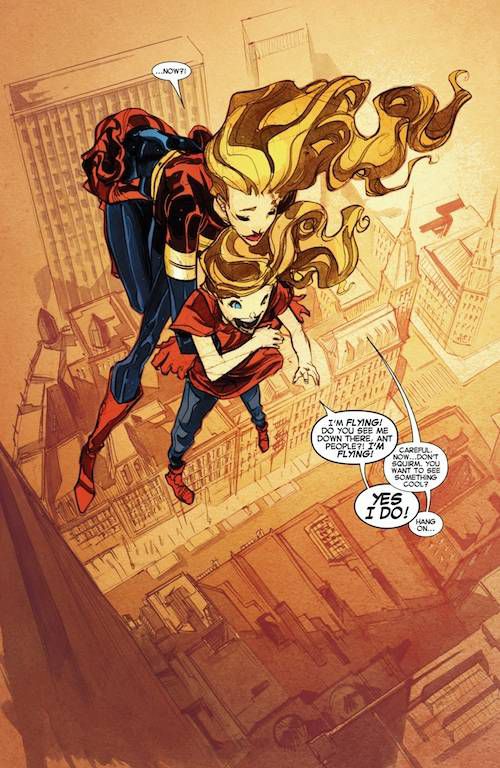 Who is Captain Marvel?

Several characters have taken on the name Captain Marvel throughout the years (for further reading, check out this deep dive), but today, the title belongs to Carol Danvers. As a full bird colonel in the Air Force, Carol outranks Captain America in the comics, and she frequently enjoys reminding him of this fact. Before taking on the title Captain Marvel, Carol used several different aliases, including Binary, Warbird, and her original moniker, Ms. Marvel (currently being used by Kamala Khan).

Carol Danvers is a tough, stubborn, smart, fiercely loyal, independent, Star Wars–loving hotshot pilot. Behind all her superpowers, though, is a need to prove herself and her abilities. Kelly Sue DeConnick, who wrote Captain Marvel from 2012–2013, sums up Carol perfectly in this quote from an interview with Polygon: “Carol falls down all the time, but she always gets back up—we say that about Captain America as well, but Captain America gets back up because it’s the right thing to do. Carol gets back up because ‘Fuck you.’” 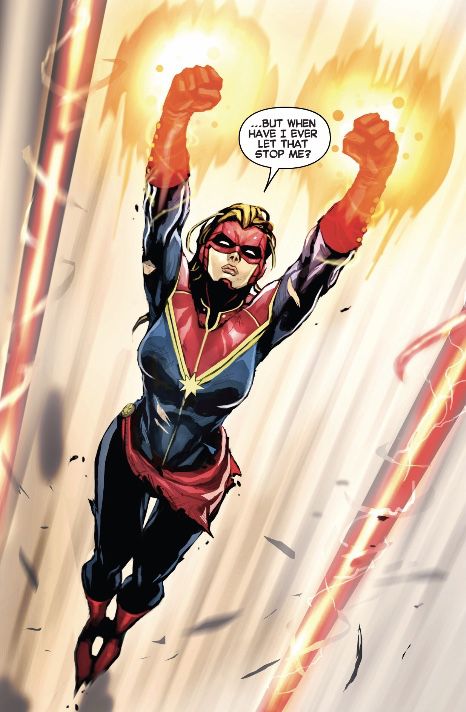 What is Captain Marvel’s backstory?

Carol Danvers was originally introduced in 1968 as a colleague of Walter Lawson, the human alias of a Kree spy and hero, Mar-vell. She was the Security Chief of a restricted, military base (NASA) and officer in the Air Force. Carol was involved in an explosion with a Kree weapon, but was rescued by Mar-Vell, which resulted in some fused DNA, and made her a human-Kree hybrid. Your basic superhero origin story! 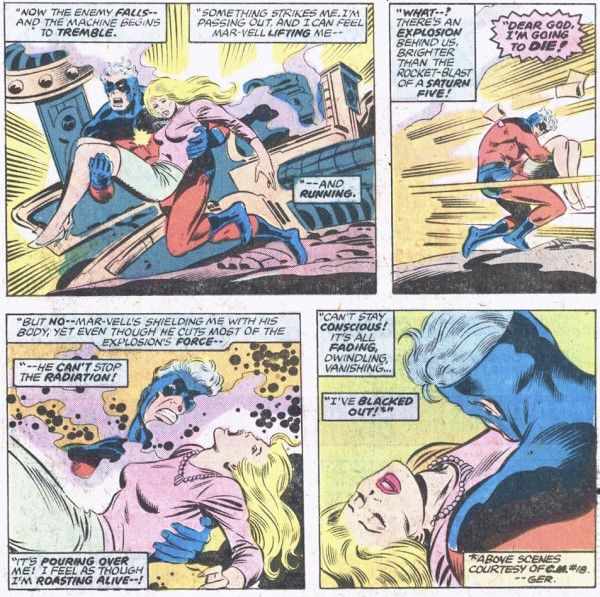 Carol took on the name Ms. Marvel, and in 1977 got her own comic book, which was marketed at the time as a progressive, feminist take on superheroes. Through the years, she has joined the Avengers, worked with the X-Men, and teamed up with Alpha Flight and the Guardians of the Galaxy. As with many superheroes who have been around for over 40 years, she has gone through some changes, including (but not limited to) losing her powers, regaining her powers PLUS some, losing memories, having memories returned, time traveling, several romances, and a tweak or two to her origin story. In 2012, Carol Danvers was given a costume update (by the wonderful Jamie McKelvie) for her solo comic relaunch and officially took the Captain Marvel name.

For more information on Carol’s comic history, check out our primer, complete with comic recommendations!

What are Captain Marvel’s powers?

As a hotshot pilot, Carol has always been a badass. But now with superhuman abilities and superhero powers, she is damn near unstoppable. Let’s break it down!

Her mutated DNA gives her superhuman strength, dexterity, stamina, and reflexes. She can also manipulate molecules, no big deal.

She can create and produce energy, which she channels as energy blasts through her hands. They don’t call her Princess Sparklefists for nothing.

She still pilots a jet (or spaceship) from time to time, but Captain Marvel can achieve flight all on her own now—including going faster than the speed of sound, and into space. The helmet is purely a fashion choice, she can breathe up there just fine without it.

And of course, we save the best for last: Captain Marvel’s binary powers, allowing Carol to essentially become as powerful as a white hole, generating and controlling any form of radiation and gravity. 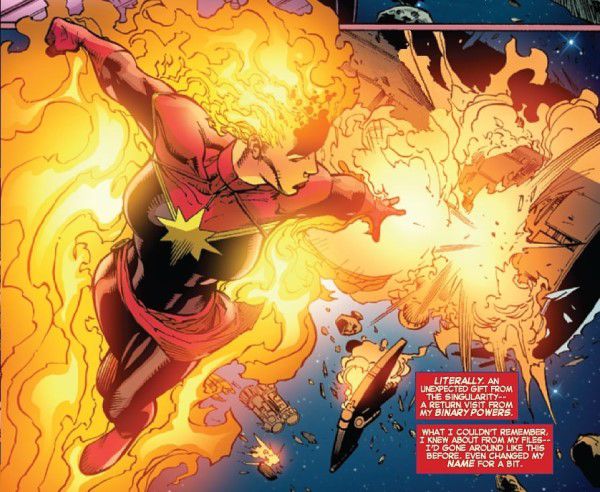 How powerful is Captain Marvel?

The short answer: VERY. She ranks as one of the fastest, strongest, most durable, and most intense characters in the Marvel universe. She can go toe-to-toe against iconic characters like Captain America and has no problems punching dinosaurs. According to Kevin Feige, she will be “by far” the most powerful superhero in the MCU. 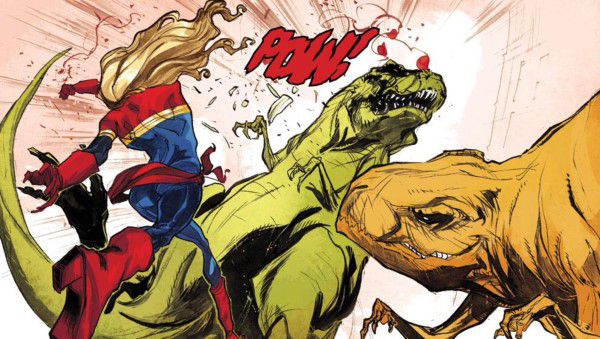 Who plays Captain Marvel in the movie?

Academy Award–winning Brie Larson is the actress stepping into the role of Carol Danvers in the Captain Marvel movie.

Like other Marvel Cinematic Universe characters, Carol’s origin story will be streamlined and changed for the film, though how exactly is anyone in fandom’s best guess. We do know that the movie is set in the ’90s and features a younger, two-eyed Nick Fury, so how exactly Carol fits into the MCU timeline is going to be interesting to see. Between the pager shot of the post-credit scene in Avengers: Infinity War, the time vortex reference in Ant-Man and the Wasp, and that pesky Time Stone, I think it’s safe to speculate that some sort of time travel will be involved.

When is the Captain Marvel release date?

After years of waiting, watching for the original release date, and living through several rescheduled dates, I am so pleased to say Captain Marvel’s movie release date is today: March 8, 2019.

I suppose we’ll have to wait until Avengers: Endgame hits theatres on April 26, 2019 to know the answer for sure. As far as this Carol Corps fan’s thoughts on the matter, well, she’s saved the world before in the comics universe. I don’t think saving the galaxy at the last minute would be any different. 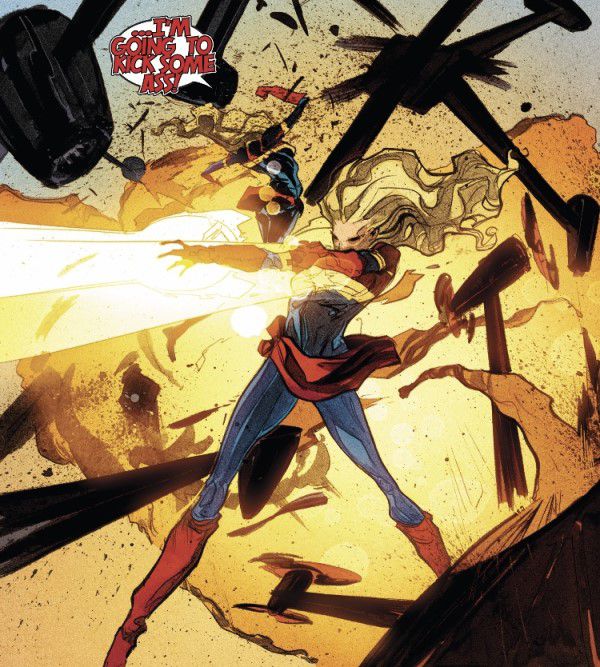