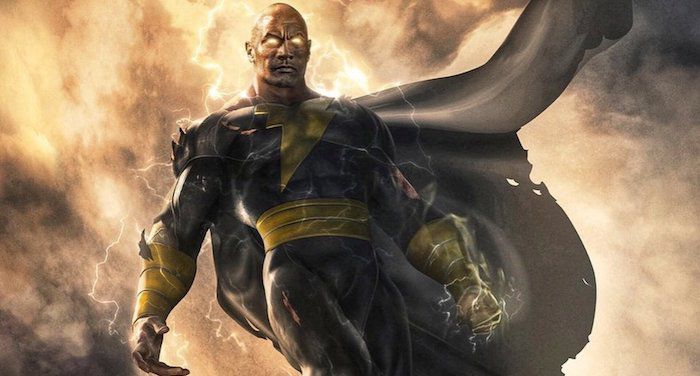 Dwayne Johnson is the biggest name in Hollywood and we’re all waiting as patiently as we can for his first superhero turn in 2022’s Black Adam. But who is Black Adam? And why does his costume look so much like Shazam’s?

Black Adam was created as a villain for Captain Marvel (now known as Shazam) all the way back in 1945 in The Marvel Family #1, published by Fawcett Comics. Basically, he was Shazam before Shazam shazamed into Shazam. The problem was, ol’ Teth Adam (his real name) fell into the old trap of absolute power corrupting absolutely. Adam was Egyptian and decided to kill the pharaoh and take his throne. The Wizard Shazam didn’t like that, but couldn’t take Adam’s power, so banished Adam into the cosmos.

5,000 years later, Adam makes it back to Earth and becomes the first superpowered villain that the Marvel family has to fight. With one blow, Captain Marvel knocks Adam out. Once unconscious, he reverts to his normal form and 5,000 years of age catch up to him in an instant.

In 1994, Adam is reintroduced with a new origin story in The Power of Shazam! graphic novel. This version was born Theo Adam in 1279 in Egypt, the son of a pharaoh. He is granted the stamina of Shu, the swiftness of Horus, the strength of Amon, the wisdom of Zehuti, the power of Aton, and the courage of Mehen. While his powers are based on Egyptian gods instead of Greek like the Marvel family, he is their equal in every way.

His story follows a similar trajectory to the Fawcett Comics version, with power corrupting him, though the details are different. Still, his path is inevitably set against Captain Marvel and the Marvel family, who he sees as unworthy wielders of a power that is his.

But who is Black Adam? The answer to that very much depends on which timeline and version you’re reading. Up to this, Adam’s character has focused around a young man who performs great deeds and is given incredible power, falls victim to that power, and seeks revenge when he is punished.

In the late ’90s, Geoff Johns and David S. Goyer took over the reigns of the JSA comics. During this run, Adam took on a new personality based on strength and a draconic sense of justice. In his (yet again) new origin, this Adam was originally the fictional nation of Kahndaq. During the Black Reign storyline, Adam partners with Atom Smasher, forms a team of mixed heroes and villains, and attacks the dictator of Kahndaq. Despite the help of the JSA, Atom Smasher kills the dictator, and Adam is left to rule Kahndaq as he sees fit.

In some ways, this version of Adam is a lot like Marvel’s Doctor Doom. Powerful and a ruler of his own country, he’s a difficult target to attack without provoking international response. Unlike Doctor Doom, though, Adam is seen as a somewhat fair, if draconian ruler. While this sometimes brings him into alignment with the heroes of the DC Universe, his willingness to do anything for the sake of his nation and his throne puts him in their crosshairs just as often.

Under the 52 relaunch, this militant-protector-of-Kahndaq persona lives on. Adam publicly executes supervillains in his country, for instance. Through the weeks of the 52 series, Adam gathers a coalition of like-minded countries around him. He also falls in love with and marries a woman. He starts building the Black Marvel Family. Things don’t end well, though.

Through the deception of Apokolips, Adam’s wife and the rest of the Black Marvel Family are killed. Though Adam avenges them in World War III, his rage is such than when he discovers a gang from the neighbor nation Bailya working in Kahndaq, Adam proceeds to exterminate the entire Bailyan population of 2,000,000 people.

After several heated battles with Captain Marvel and a collection of powerful mystics, they manage to force Adam into his human form and change his magic word, locking his devastating powers away from him. Given Dwayne Johnson’s dislike for sad movies, I doubt we’ll see this particular incarnation of Adam on the big screen.

Because these are comic books, of course Adam eventually returned with his powers. He has played the powerless man searching for his new magic word. He was still distraught over the death of his wife and his own Marvel family. And he has ruled Kahndaq again, fought against the most powerful heroes in the DC Universe, and even joined the Justice Society of America.

So who is Black Adam? That depends greatly on which version you’re reading. At his worse, he is a genocidal villain of biblical proportions. At his best, he’s an anti-hero, always driven by his own agenda. He loves and hates with equal fire. His sense of justice is draconian and unwavering. Whether friend or foe, he is one of the most powerful icons of the DC Universe.