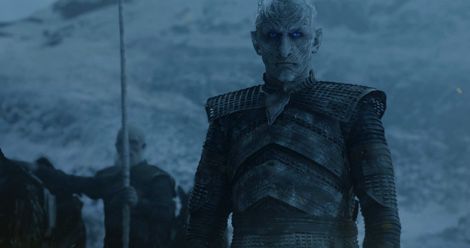 True to form, the White Walkers—or wights, as they are sometimes called—are resurrected bodies. Technically, by that definition alone, they are ghouls, not “zombies,” but there is, of course, way more to the Game of Thrones convention. The term “zombie” comes from voodoo culture, and the basic, oversimplified premise is not that the person has died and then been resurrected in body alone, but that, instead, the body is being controlled by someone else, and that the person’s mind is still in there, just along for the ride. (American popular culture often conflates the two terms, but for our purposes, here, they’re pretty distinct.)

The White Walkers of George R.R. Martin’s Game of Thrones world build on zombie traditions (American traditions are the ones with which I am most familiar, but he definitely incorporates attributes of others as well), and they make the monsters as we know them even scarier. Here are the top six reasons that I think White Walkers are scarier than your average ghoul. 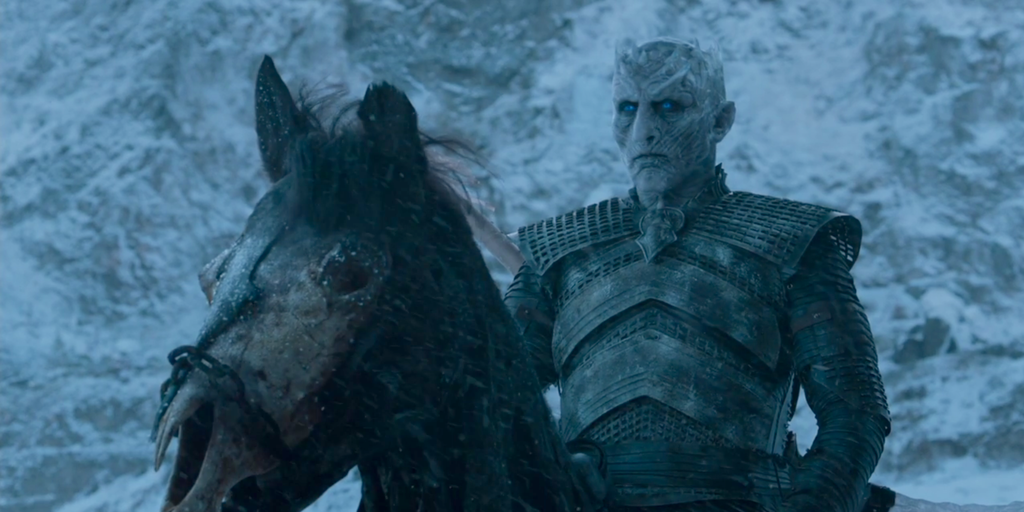 [Warning: spoilers ahead! Do not read if you have not watched season 8, episode 3, “The Long Night.”]

As we have seen MANY times in Westeros, if you don’t SEE HIM DIE ON SCREEN, he ain’t dead. You might have thought he was dead, but that red lady will bring him back probably maybe if she doesn’t get the wrong dude on the line. My point is, it takes us MANY seasons to figure out how to kill the White Walkers, and it took a near-genius to put the pieces together: it’s in the weapon itself, not the method. And now you’re up against a trained warrior, too? FML.

The White Walkers in “The Long Night” episode of Game of Thrones are nearly all warriors, and warriors that our protagonists were JUST fighting alongside. No shambling horde here…just a bunch of trained professionals that YOU trained with who are now ALSO immortal undead, which brings me to my next point.

Granted, this is pretty standard zombie fare, to have no sense of self-preservation, but these are HAND TO HAND COMBAT WARRIOR LEVEL DGAF. Achievement unlocked. Like, we all know the phrase “fall on the grenade,” but here we have wights just WALKING INTO A PIT OF MAGIC FIRE, lying down, and letting the next one walk right over them until they fill the pit and make a land-bridge of their own decaying flesh. They DGAF.

The strength of their numbers is, of course, what makes this strategy effective. If we could just, like, MAKE MORE DOTHRAKI WHENEVER, well, then that would be also scary. But we can’t. WE CAN’T. (RIP Dothraki hot bodies. To me, you will always be the stallions who could mount the world.)

3. They Increase in Number ON COMMAND

This is not the way in traditional ghoul or zombie lore. And TBH it just ain’t right. Normally, a precise convention is established. One has to be bitten by a ghoul, and ghouls’ motivation is just feeding. Scratching is not good either. A violation of the body envelope BY the infected is required. And, you have to die first. The change happens slowly. Or, sometimes, all at once. Sometimes, radiation is to blame. Sometimes, in the case of zombies, a spell is cast. Regardless, we learn the convention, and living mortals learn to avoid it.

What brings the White Walkers back to life? The Night King FEELS LIKE IT. He waits for most of the Winterfell force to die, and then brings them all back, on his team, in one big Fosse-style port de bras.

4. They’re Being Controlled by a Bigger, Badder Boogeyman

This is, to me, where the wights lean more toward being zombies—they’re resurrected, sure, so they should be technically dead, and their soul should have left their bodies, by most western belief systems. HOWEVER, Jon Snow and Beric Dondarrion were both resurrected, and they say there’s nothing afterward, their minds stayed with their bodies. They were both grateful to be resurrected—at least, from what I remember, that was the general attitude, although I do remember some SERIOUS ambivalence in Jon Snow. Nonetheless, the wights do not control what they do. Remember when the Night King raises all Jon Snow’s fallen comrades even while he’s running at a full tilt to skewer him? Do you think they WANTED to do that?

This is, to me, the scariest part of the White Walkers. If we are to run with the logic that Beric Dondarrion and Jon Snow’s consciousnesses stayed in their bodies after death, then, y’all: the men whom the Night King resurrects are STILL IN THERE. Imagine! Imagine dying in the Great War for the cause of humankind, and then suddenly you’re awake, and you’re killing humans, and you can’t stop because you’re not in control anymore. That is the most terrifying thing of all, right? Not being in control of one’s own actions.

6. They Were Made to Destroy Man

Back when Bran becomes the Three-Eyed Raven, he learns that the Children of the Forest created the White Walkers to defend themselves against their own demise at the hands of Man. We don’t know, really, why they reawaken, but we get the idea that it’s an extended sort of justice inflicted by these ancient creatures. No punishment hurts so much as the kind that you know you deserve…except for the kind that you undergo because of someone ELSE’s actions, which is what we see here, both in the case of the White Walkers, and other humans.

That’s the thing about ghouls and zombies: the conflict against them really serves mostly to exacerbate our conflicts among each other.

To me, those are six reasons that Game of Thrones’s White Walkers take zombie and ghoul culture to the next level. What do you think? And what elements of reanimated corpses from other parts of the world did I miss? Let me know in the comments!