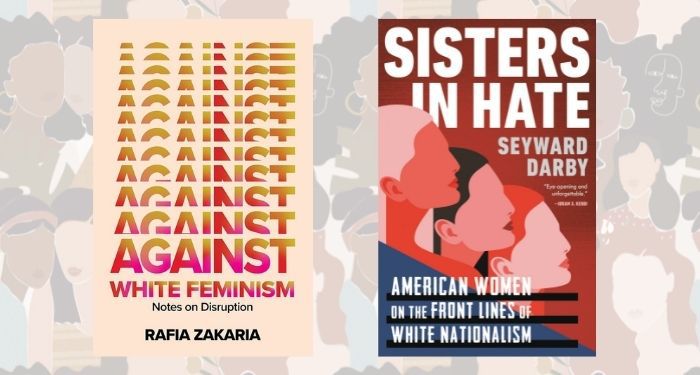 There are many current events that lawyer and author Rafia Zakari’s new book Against White Feminism: Notes on Disruption help readers contextualize. As I turned the pages, though, it was the rise of the white hate groups and the women in them that kept echoing in my brain.

Early this spring I had finished Sisters in Hate: American Women on the Front Lines of White Nationalism by Seyward Darby, which follows three women who either are or were prominent members of the Alt-right movement here in the United States. Both books are necessary reads for anyone interested in gender equality and they overlap in many ways.

Before I discuss these overlaps, I wanted to give a quick definition of American “whiteness.” Whiteness is a construct that has changed as the United States has aged. Those who have been considered white once only include those of Anglo-Saxon decent but has grown to include anyone of Christian and European decent. Using Zakaria’s descriptions, too, it also often refers to those who are among the middle and upper classes, who see individualism and neo-liberalism as the keys to solve most problems. However, lower classes, too, benefit from whiteness, just not in quite the same ways. Those who are deemed “white” in America are often given more access to resources and are scrutinized less with in our culture.

Whiteness and the concepts of race are steeped in complexity. So much so that a short essay isn’t really going to cover it. Nevertheless, an inability to look at complexity and nuance is a critique Against White Feminism and Sisters in Hate make about their subjects.

In Against White Feminism, Zakaria writes, “Times may have changed, but the commitment of whiteness to extracting value wherever it can — and dominating the narrative to frame this extraction as benevolence — persists.”  Here she is noting legacy of colonialism and the often-dangerous narrative of white innocence that exists in mainstream feminism. Every white person in America, including women, are both product and perpetrator of exploitative colonialist practices even if indirectly and unknowingly. Many of us take part simply because it is next to impossible to exist without participating in it. However, Zakaria notes there is an often dangerously reactive, denial of colonialism or white dominance that allows white feminists to remain comfortable.

A similar refusal to think about complexly is a refrain in Sisters in Hate as well. One of the common things among those heavily involved in the White Nationalist movement, Darby writes, is the dominance of binary thinking. For members of the Alt Right, things are seldom complicated or seen from a nuanced perspective. Things are either good or evil and there is no room for anything in between. It holds up the idea that white Americans are the only legitimate Americans, and their actions are always good and pure. White Nationalists often defend this idea of purity because if they don’t, the concepts they so ardently protect, crumble.

Sexual freedom and motherhood also run oddly parallel to each other in both books.  Rafia Zakaria notes that she once attended a lecture that talked about feminist sexual freedom, and explains that as a single parent, sexual exploration wasn’t really a part of her liberation, yet its emphasis drowned out other voices with different concerns.

In Sisters in Hate, Darby describes how the women of the White Nationalist movement are often valued most for their ability to produce more members of the white race. They must be ideal mothers and wives and often uphold traditional values.

“Bigotry in America has many branches, some bigger and stronger than others, but they all derive from the same trunk,” writes Sewayrd Darby. For me, this quote helped solidify one of the struggles I had as I wrote this essay. As I worked, I worry that comparing these two books makes the argumentative leap that White Feminists are like members of Neo-Nazi Groups. This is not the case. White supremacy values men above women and pushing back against that takes away part of its power. Even so, white supremacy is such a dominate part of American culture that it is impossible for feminism to exist without tendrils of deeply embedded racism. We can only do the best that we can do with the information that we have. If white women like me disregard the insight and knowledge women offer us, then we are complicit in perpetuating an ugly status quo.

When describing her calls for the future, Rafia Zakaria writes, “This is not an elimination of white women from feminism; it is an elimination of ‘whiteness’ from feminism, in the sense that whiteness has been synonymous with domination and with exploitation.” If we want to give feminism the sharp teeth to defeat the abhorrent behavior of White Nationalism it must be more inclusive, more intersectional, and more willing to sit with discomfort of its past mistakes.

What we must also remember from both of these books is that we as Americans, especially those of us who are white Americans, must embrace discomfort and responsibility. We must have the courage to see prejudice and bigotry within ourselves and in our peers and then hold ourselves accountable when we see it. With out accountability, there will be no change.