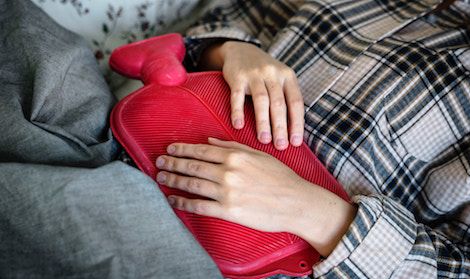 I’d like to know why periods are rarely mentioned in literature. There’s Are You There God? It’s Me, Margaret, which lands itself on challenged and book banned lists; Carrie; The Widows of Malabar Hill; Killers of a Certain Age; Fifty Shades of Grey. Except for the latter — a tampon removal for sex scene — all these books focus on first periods or menopause, which seems to be the reason periods exists (or cease to) in novels the rare times they do. As if the bloody years between first period and menopause mostly do not exist.

This is incredibly strange and certainly not at all a representation of real life. Every month, my text messages are a rotation of very lolsob gifs as friends get their periods. Most of the time the text message doesn’t even contain words, they aren’t looking to chat, they just needed to send out into the world the elevator doors in The Shining opening up as blood pours out, Leslie Knopp saying “Everything hurts and I’m dying,” and a doodled ovary just gushing blood. Just to name a few — I could do this all day.

Since getting my first period — in a hotel pool, for consideration for the worst timing award — I’ve had a lot of conversations about periods — because there is a lot to talk about. Some people have PCOS, endometriosis, need prescription hormones, need a prescription for cramp pain, can’t afford sanitary products or don’t have access, get anxiety with their period, get period flu, get clumsy when they get their period, get migraines, get exhausted, are allergic to some pads, can’t wear tampons, can only wear tampons, use only the menstrual cup, tried the menstrual cup and it was a disaster — this list could fill an encyclopedia if I continue.

How is something that happens a lot, for a lot of people, for a long time, disproportionately left unmentioned in books? Was there some collective decision to just not go there? Do editors casually recommend editing those bits out? Do writers not even attempt to write characters that menstruate? Are periods so stigmatized that we just mostly avoid the topic in literature?

According to Unicef, “Every month, 1.8 billion people across the world menstruate.” That’s a billion WITH A B. And in ONE MONTH. You’re telling me that that many people menstruate and it isn’t even worthy of a sentence in a book? No one in a sci-fi novel has to board a spaceship and thinks “How many tampons/pads do I need to pack?!” No one in a domestic thriller needs to take a day off from plotting their spouse’s murder to lay down with a heating pad on their abdomen and a cool washcloth on their forehead? Every single person in an apocalypse gets to bypass their period? Vampires don’t find certain people more appealing once a month?

In contrast, here are things I’ve read more of in fiction than a character even just mentioning they have their period:

As a society, we’re in a place where people are pearl-clutching because Disney’s Turning Red shows a mom prepared for her tween daughter to get her period and episode 3 of Baymax! has tampon purchasing.

So what are we really saying by barely saying anything about periods in literature? When we don’t openly talk about basic things, are we not making it easier for misinformation to occur? For shame? Stigma? If we can’t talk openly about periods as a normal bodily function, when will we ever talk about things like menstrual equity/period poverty and reproductive health education in order to fix harmful inequalities and issues?

We did not talk about abortions, and most people do not know the basics about abortions, and now the U.S. Supreme Court officially reversed Roe v. Wade. Should we really continue pretending that things like menstruation rarely happens instead of normalizing it? If periods don’t get discussed because they’re viewed as a woman’s issue in a society that does not value women, what power are we giving away? The same people that are livid over a cartoon mom being ready for her daughter to start menstruation — what will they do with power? How do they react to the fact that not all women menstruate and not all people who menstruate are women?

Novels should be normalizing periods, from the first through menopause, as a defense against stigma, misinformation, and inequalities. So bloody up all the books, please.

PCOS, Endometriosis, and Other Female Challenges: What We Never See In YA Fiction

Period Fantasy: On Mentions of Menstruation in YA

What To Know About Period Poverty