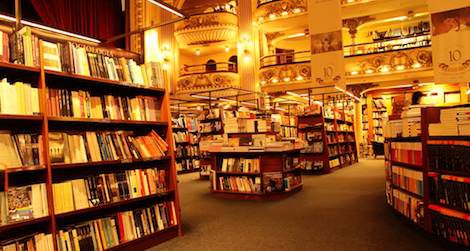 Every year, the Cooperative Children’s Book Center releases an in-depth accounting of the number of books by and about people of color and Native/Indigenous peoples. These numbers are pretty much the only data that provides any kind of insight for diversity and inclusion statistics within children’s publishing.

For a long time I’ve wondered how these books actually relate to the break outs of categories, namely Young Adult, Middle Grade, and Children’s Books. Although all three categories are technically children’s books, I’m using Children’s books to refer to anything not MG or YA, so picture books, easy readers, chapter books, etc. I’ve long had the sneaking suspicion that many of the main characters of color were not characters of color within the text, but rather the product of a text that doesn’t specify race and illustrations that do, quasi-retconned diversity. I am also reasonably sure that many of these main characters of color reside in picture books and include “Minority History Month Books”: non-fiction picture books about exceptional Black/Asian/Latin-Americans that librarians buy for displays and school reports.

I figured that the easiest way to attain some level of insight would be to track the releases of Young Adult. YA has for at least the past ten years been the tail that wags the dog of kidlit. YA books enjoy a robust publishing cycle but most have the shelf life of an adult cicada: the average book remains on the shelf of your local Barnes and Noble for three months. This quick turn over means that YA books are plentiful, as publishers search for the Next Big Thing.

There are two prevailing ideas behind diversity and inclusion initiatives. One is the fight for parity, or to have minority populations represented in media in the same (or better) ratios than they are in the general US population. The other is to have quality minority representation, stories that are free from microaggressions and stale stereotypes. Since I’m not planning on reading most of these books and I’m not an expert on the portrayal of any experience but those of Black Americans, I’m really only looking at parity in this analysis. 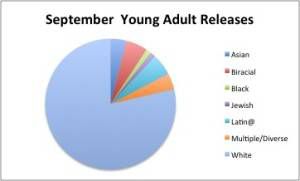 Seventy-five young adult books are scheduled to be published in September. (Link to data set here.)

Thirteen contain main characters that are not white.


The majority of books released in September, 59, contain white main characters. This includes non-human characters as well, such as an android and genetically engineered super humans.

Quick note on the Census Data: Census data as a barometer of racial representation presents some challenges. The first is that many minority groups do not complete the Census either for fear of reprisal or because of historical oppression. US Census also counts some minority groups, such those of Middle Eastern descent, as white and also includes white Hispanics as white, even though some may consider themselves Latin@. There is also the problem of Asian being a single category used to identify hugely disparate groups. Religious data isn’t gathered by the Census, but religious diversity is important. Where relevant I will point it out, but only within historical and contemporary titles, as it might be confusing within fantasy and science fiction structures.

Racial make up of main characters was compiled from Kirkus reviews and via readers on twitter where possible. If no race was designated in the text the main character defaulted to white.

This method and baseline is far from perfect, but I believe it’s a decent place to start the conversation.

There are a few conclusions we can draw from this data, but the most obvious is that while Asian representation is closest to parity (6% as of the last Census), Black and Latin@ are sorely lacking (Census percentages are 14% and 17%, respectively). Biracial representation is also overstated at ~5% of September’s YA books, since Census numbers put this at closer to 2.5% of the population. The prevalence of biracial characters being white and another race seems to indicate, like the multicultural, multi-POV casts, that white authors are more comfortable writing about minority groups when they can make them partially white.

My next steps are to go back and do this same analysis for the rest of the year. September has a busy release schedule, so I do wonder if the representation will be worse or better in months with fewer releases. At the end of my compilations I hope to have a robust data set to compare to the CCBCs listing which should be posted in winter of 2017.

This original release list was sourced from Book Riot’s own Kelly Jensen. If I’ve missed any releases from a major publisher this month please let me know in the comments.