There’s this scene in Sister Act 2: Back in the Habit (it’s awesome, don’t hate!) when Whoopi Goldberg–as Sister Mary Clarence–reacts to a rebellious student in her choir by asking, “A little lonely out on that limb by yourself?” (NB: I’m pretty sure the student in question is young Lauryn Hill, but I didn’t check because if I had, I’d be on my fourth viewing of the “Oh, HappyDay” performance instead of writing this post right now.) Lately, as I’ve watched the “Best of 2011” lists roll out here on Book Riot and on literary blogs, I’ve been feeling like maybe Whoopi should ask me the same question. You see, I hated a book that is now appearing on many of my peers’ and colleagues’ year-end roundups, and I’m equal parts astonished and confused, so convinced was I when I read it that no one would rave about it, ever.

I’ve been on both sides of this. I’ve felt smug, self-conscious, tingly, preachy, and everything in between, and now I’m wondering how you feel about being the only one to love or hate a book. Let’s take a look at this handy chart I’ve made to kick off the conversation.

Based on this highly unscientific examination, we can conclude that it is better to be the only one who loves a book that everyone else hates than vice-versa. If we were to make it even more unscientific and introduce “anecdata,” I could tell you about a few of the books I feel alone in adoring and am just waiting to hear a stranger discussing at a party so I can know I’ve found my new best friend. But that’s a sermon chat for a different day.

Now tell me: when you’re the cheese standing alone about a book, would you rather be on the “love it” or “hate it” side? 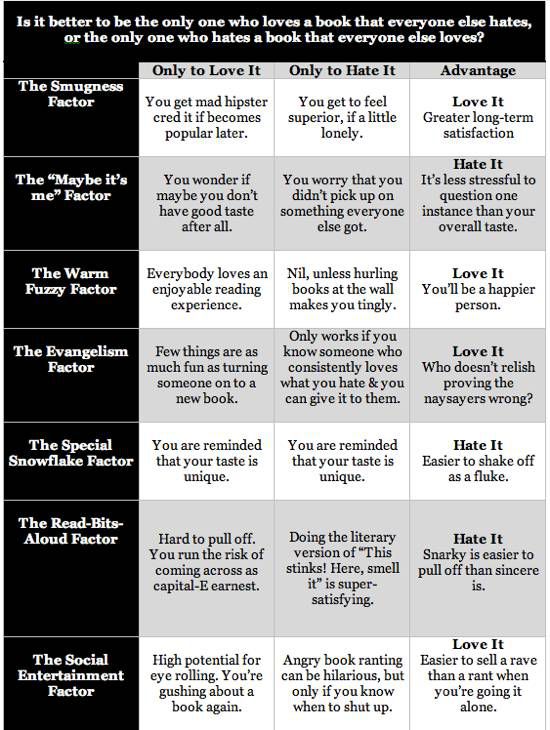