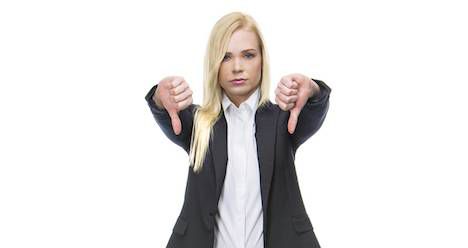 After sitting through an excruciating three-hour Broadway musical that shall not be named, I came to a realization that has since informed my life as a consumer of media. I realized that I had purchased tickets to this show, ignoring the seemingly obvious indications that it would be terrible (based on concept alone; I hadn’t read any professional reviews yet), solely due to the abject squeeing from friends in my Facebook feed who’d seen it and deemed it fabulous.

Super proud of all my friends who opened [REDACTED] tonight on Broadway!!!

That last one should have clued me in. The fact is, I travel in creative circles. A big chunk of my friends are currently performing (or directing, or composing, or doing hair) on and off and off-off Broadway. And what do you do when your friends are in a show? You support them! You go see it! And if you go see it, you say something nice and possibly patently false about it on social media because you are a good person and not a sociopath.

But then other people see and believe these good things you said and get suckered into buying $200 tickets to [REDACTED].

So now I know better when it comes to musicals (and bands and art installations and indie films). I’ll never again shell out big bucks for a performance I haven’t researched with professional critics as opposed to just . . . professionals. And friends of professionals.

But I still have a problem.

This one metastasized during my years as a book editor and is even more prominent now that I’m an author myself and I belong to an ever-expanding “bookish” social media community—which includes thousands of authors, editors, literary agents, and publishing professionals around the world.

Being part of this community is wonderful, but it also means I feel like I can’t always tell the truth about the books I don’t like, because someone is going to see it and get their feelings hurt. And because I’m a publishing professional and bookish sort, people tend to ask me for my thoughts and recommendations.

“Oh, I saw you were reading X. What did you think? Should I buy it?”

The problem is, I tend to announce what I’m reading before I’ve fully formed an opinion (such as when Book Riot comes calling for the “Peek Over Our Shoulders” feature). So if I don’t ultimately like the book, I don’t want to lie when asked, because I don’t want to lead anyone down the path of three (or four, five, or six) hours of wasted reading time. (Cue flashbacks to [REDACTED: The Musical!]) But I’m also worried that, if I tell the truth, somewhere out there in my Facebook or Twitter feed is someone who worked really hard to bring that book to life who’s going to be really upset to see me dissing it. I know I felt that way as an editor when one of my authors’ books was raked over the amateur reviewer’s coals, and I sure as hell do now, when it happens to my own book.

And yes, I know I’m not exactly an “amateur” when it comes to judging the quality of a book, but I’m also not a professional critic. In terms of reviewing books written and edited and published by people I know, I’m no different than the theatre crowd cheering on their pals in the latest black box production of David Mamet Does Dallas. People like Ron Charles and Michiko Kakutani are the ones getting paid the big bucks to shape the culture and they’ve worked hard for the right to do so, as have dedicated book reviewers at countless print and online publications, and bloggers (and vloggers!) and podcasters who’ve become trusted names in literary criticism. When I say “amateur,” I’m not talking about them; I’m talking about Amazon and Goodreads-level reviewing here, by me or anyone else.

When I was an editor, I wasn’t sure it was ethical to give “my” books (ones I’d acquired or edited) 5-star reviews on Amazon or Goodreads even when I legitimately thought they deserved them. Honestly, some of them only deserved 3 or 4 stars but I wasn’t going to write those reviews either, for obvious reasons. So I stayed mum on all accounts.

Then there were books I’d read (not mine) that I liked but thought were flawed, sometimes significantly so. An honest 3- or 4-star review is still a “good” review, but what if the author was someone I’d begged a blurb from recently, or the editor or agent was a friend of mine peeking at my Goodreads page? What if he or she was offended? What if I was about to burn a bridge—personal or professional? So I kept quiet on that front, too, and I didn’t even think about handing out any 1-stars, lest the karma gods put me squarely in their sights.

After all, we—the bookish types, the publishing professionals, the readers and writers—have a huge, inter-connected community of friends and colleagues and people we know and respect in real life, as well as online. We’re all seeing what we’re all saying, and a lot of us are paying much closer attention than you might think.

Hence, my public Amazon profile is sparse, with no indication of my real name, email address, or other identifying factors. I’ve only got three actual book reviews up there (two honest-to-goodness 5’s and a 4), alongside a smattering of tools and housewares, which, when I catalogued them while writing this post, actually do paint me as a potential sociopath.

My Goodreads profile is equally sparse—though it carries my real name and photo, and I’ll mud wrestle anyone who objects to my having voted for Luckiest Girl Alive (a book I edited) as one of the best Mysteries & Thrillers of 2015. Otherwise, you won’t see any evidence there of the hundreds of books I’ve read—and loved or hated—over the years. Which feels weird to me.

So what I’m trying to work out here, is whether and how I can participate in my literary community with both full-blown honesty and compassion. I don’t want to knowingly lead my peers to a book that was over-hyped because friends and colleagues of the author/agent/editor/publisher felt obliged to say only nice things and pay no mind to its flaws (HYPOCRITE ALERT: I’m sure many of my own friends did this for me, and I’m eternally grateful to them). I do want to publicly praise good writers for good books, but I don’t want to be 5-Star Sally. Rating every decent book a “5” is disingenuous, and it cheapens the best books to be seen as indistinguishable from the rest. Plus, it’s not my style. I want to be free to thoughtfully dole out my 2’s and 3’s and 4’s—yet I know that anything less than 5 stars is going to cause a cringe in someone, be it the writer, editor, publicist, or publicist’s mom (it happens!), and then I’m back to square one.

Is it possible to be an honest, trusted reviewer of books, and deeply entrenched in the publishing community, without hurting anyone’s feelings? I do casually recommend books in my social feeds, but I’m silent when it comes to actual reviews and ratings for posterity. The one time I slipped up and confessed not to have been able to finish a certain award-winning doorstop of a novel, I was immediately called out by a literary agent on Facebook. Okay, back to my self-imposed silence!

But then I wonder, is my silence an even worse slight to those who seek thoughtful critique, and who might like to know their book was read by another human, even if she gave it a 3? (And good God, why does this give me so much anxiety?!?)

So I’m curious about how other people deal with reviewing bad books, or books they liked but have clear flaws. Is it a matter of balls-out honesty, or offering only the nicest things you can muster? Or do you simply—as my parents might have advised when I didn’t have anything nice to say—say nothing at all?